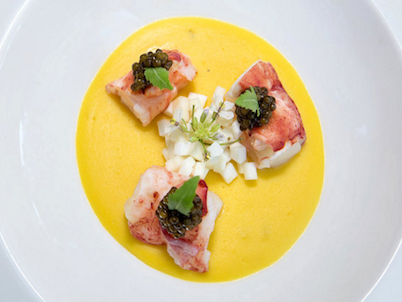 Michelin Stars in the Desert

Palm Springs has always been known more for its palm trees and party scene than its culinary prowess.

Hoping to change that perception is SO.PA, a new alfresco-only restaurant hidden from the hum of East Palm Canyon Drive behind a whitewashed brick wall at the posh L’Horizon Hotel and Spa. “Designed by Steve Hermann,” whom we are apparently supposed to know, as his name is flaunted on the sign out front.

Mr. Hermann is also the owner of what he refers to as a “restaurant-driven” hotel. He originally hired the Michelin-starred chef Giacomo Pettinari (of El Bulli and Valentino) who opened SO.PA to immediate raves. Mr. Pettinari’s father recently passed away, forcing him back to Italy. His replacement also came with Michelin stars: the chef Chris Anderson, formerly of Alinea and Moto in Chicago, who cooked 22 courses for Mr. Hermann before scoring the job. (Mr. Pettinari had cooked 20.) “Most owners want authority over the menu,” he said. “Steve offered me free range.”

On a chilly evening in February (when the kitchen was still being run by Mr. Pettinari), we enjoyed just five, if you include the dreamy bowl of house-preserved olives mixed with creamy sheep’s feta and salted Marcona almonds we had with our $8 cocktails at the long walnut table reserved for “communal hour” (5 to 6:30 p.m.). Locals otherwise put off by SO.PA’s prices take advantage; 10 percent of proceeds go to local organizations like the Desert AIDS Project.

At 6:30, our server, whose affability pleasantly undermined his twee polka-dot bow tie, moved us beneath a sprawling mimosa tree to a table for two draped in white linen, and turned up the heat lamp. (That night heat lamps outnumbered diners in the courtyard 17 to 12.) “Come back in summer,” he said. “It’s so hot your foie gras melts.”

Our roasted Spanish octopus, however, was firm and flawless; the tender, meaty tentacle arched on a plate streaked with smoked squid ink, accompanied by crushed potatoes in a parsley pesto. A compressed melon salad with micro mint and French feta, though refreshing and enthusiastically recommended by our server, underwhelmed. But not the spicy, reasonably priced Zaca Mesa 2010 syrah — nor the indulgent confit poussin, pan-roasted in duck fat over a seasonal apple purée with flash-fried baby artichokes.

Though a starry desert sky enhances any dinner, SO.PA’s commitment to embracing its darkened surroundings can be a bit of a hazard. Despite gorgeous, golden-hued molecular light fixtures — and the fact that flashlights are provided on request — there was occasional confusion over dishes, and diners.

“Our server, twice, asked, ‘What can I get you, gentlemen?’” remarked a local gallery owner after a recent meal. “My friend was, most definitely, a woman.”