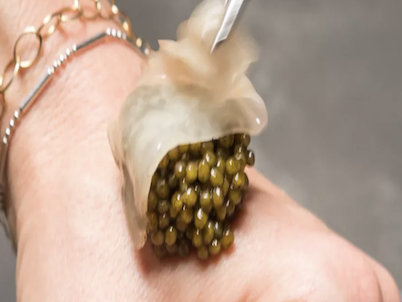 There was a lot of chest hair. Not in my food, but peeking out from the shirts of the men presenting it. And it was mostly men — wearing skinny jeans, no socks, blazers pulled tightly around fit torsos, and button-downs unbuttoned one button more than most, at least on this coast. I wouldn’t mention it, except the servers underscore the atmosphere at Avery, which can be summed up in two words: bachelor pad. It’s like a dark, boxy, barely decorated apartment rented by a single, 30-something guy who happens to be a really good cook.

And when I showed up alone on a Friday night, it felt like an awkward first date. Greeting me was nothing — and no one — but a floating black slotted wall. I stood staring at it until my husband arrived. Eventually the host showed up. “Welcome to Avery,” he said, unaware we’d been waiting.

“You’ll be joining us tonight for the Cello Player menu?” he asked, I assumed rhetorically. We were unsure of the actualname of the menu we purchased, anyway, as we’d prepaid through Tock earlier that week. The more expensive one, I wanted to say. We followed him through the small, hushed dining room, past a lone table of four, and up a set of black stairs to the second-floor dining room. It looked the same as the first, just without windows.

There, the awkwardness continued. We looked at our server. Our server looked at us. We looked at our menu, a vertical cut of calligraphy paper scrawled, simply, in black ink: “Grains,” “Oyster,” “Curry.” It was pretty and poetic, but clearly called for some sort of introduction, which we never got. So we asked. After a seven-minute monologue describing each of the seven courses, plus all of the possible “additions” — like trout roe, “caviar bump,” and spicy lobster with sea urchin — he wandered off, without asking if we’d like to start with anything to drink.

Then I realized: Wait, we hadn’t prepaid for Cello Player! We’d prepaid for the 13- to 15-course Shades of Spring menu, which was supposed to include all of those decadent add-ons. An honest error, but we would’ve left cheated had we not realized. And — as I learned when we later tried Cello — still hungry enough to eat an off-menu hot dog at the Progress across the street.

I let our server know about the mix-up, which led to more awkwardness: scurrying, whispering. Apparently we should’ve been seated downstairs with the handful of fellow high rollers who had also paid $189 per person. Instead, we were seated upstairs, with the commoners who’d paid a mere $89 per person. We were told to stay put. Our menus were whisked away. (Shades of Spring doesn’t come with menus.) “Let us cook for you,” our server proclaimed, with too much pomp for a moment we both knew had been lost.

All of which is to say: It wasn’t the smoothest start to a $700 dinner.

But Grains is: a ceramic palm-sized bowl half full of a broth infused with toasted rice and clarified burnt onion butter. It was so aromatic and rich and soothing, I wanted to bathe in it. And I hate baths. With each sip, our angst evaporated, and we were reminded: We came to Avery to eat. We also came to drink sake — the restaurant has a sake sommelier, after all — except we still had yet to be offered any. Ultimately, we came for chef Rodney Wages, whose resume is studded with all-star venues like the French Laundry, Benu, Saison, and Atelier Crenn.

I never made it to his pop-up, RTB Fillmore (RTB as in “Rod the Bod,” a nickname courtesy of his pals at Saison). But it was such a hit, he and partner Matthew Mako decided to make it permanent, and wisely rename it Avery (as in Milton, the American painter). And now we have yet another elaborate, expensive tasting menu in a high-flying town that’s teeming with them.

Lest we forget how elaborate and expensive, each indulgent, artfully arranged course at Avery reminds us. It’s like culinary hedonism’s greatest hits: Pearls of smoked trout roe are piled into a pair of golden spoons over crushed avocado with sesame, and accompanied by cured kampachi in a spicy-sweet sunomono with preserved citrus, crowned with a crisp of kelp.

A tin of osetra caviar arrives in a crystal bowl of crushed ice. It’s served as a bona fide “bump”— the server spoons the eggs onto your fist along with a dollop of smoked creme fraiche, then drapes it all in a fat slab of barbecued wagyu beef fat. (Yes, all on your fist.) It’s a salty, smoky, slippery slurp, enlivened by a perfect pop. The effect is similar to the drug it alludes to: I immediately wanted more — although not at $68 a hit.

Also, an island of Fort Bragg uni floats in a rich red broth made from lobster shells, spiked with espelette pepper. It’s the four-star version of a Fisherman’s Wharf cioppino, and I savored the slow burn of every slurp.

And of course there is foie gras, twin silky, smoky morsels in a light garlicky broth encircled, like a team of synchronized swimmers, by hand-pinched tortellini: delicate pouches concealing shiitake mushrooms and a burst of cultured butter that vanishes. “This might be the star that steals the show,” Mako warned, his chest hair emphasizing the cheesiness of his line. But he’s right.

Until the 12th course, when the “snow beef” shows up: a pair of rosy, marbled hunks of A5 wagyu, perfectly seared.“He’s the Jedi of beef,” said our server, referring to its famous Hokkaido rancher, Fujio Terauchi. The $78 price for this “supplement” had looked preposterous when I saw it on our wrong menu earlier, but biting into the charred, buttery meat — velvet incarnate, really — it almost made sense.

It at least made economical sense to go for the whole Shades of Spring shebang rather than to tack the beef onto the cheaper, briefer Cello.

Money and value is a funny thing, though, when it comes to tasting menus. These days, we’re seeing more and more of them in the Bay Area at all price points. We’re paying for the food, but at $89, $189, or, in the case of Avery’s private room, $289 per person, we’re also paying for the experience. Avery excels in the former. I revered, and demolished, almost every dish. There were just two blips: The spiny lobster curry, which was overpowered by mint, and tasted like the world’s most expensive cup of Scope; and the cheese tart, which was gloppy and flimsy and, as the penultimate course, oddly incongruous with an otherwise exceptional parade.

But as for everything else, Avery is lacking — no matter where you sit. On my second visit, despite booking the less expensive menu, we were seated downstairs in the supposedly nicer space. Perhaps because they’d remembered they’d messed up last time, or perhaps because they’d recognized me last time. It later became clear I’d been outed — and possibly overserved, yet never charged for it.

Maybe they thought if I drank enough sake by the end of the meal, I’d forget all about its clumsy start.

Nope. That’s the problem. No matter how seamlessly my second supper went, no matter how wonderful Wages’ cooking, the vibe is too immature for its price tag; the experience too stiff and stilted and salesy. The warmest thing about Avery is the nubby, soft West Elm blankets curled in the banquettes, in case you feel cold — like the place itself.

There are too many other restaurants where you can spend a small fortune these days. If only Avery felt more like a good first date: fun enough to want to do it again.