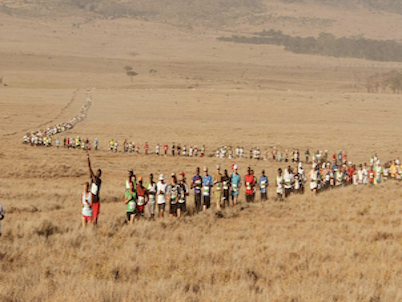 THE NIGHT before the race, I started to freak out. A few nerves are normal, I know, but this was different. In my past as a very amateur competitive runner, I’d climb into bed on the eve of a race and fret about whether I’d set the alarm for p.m., not a.m.; whether it would even go off; where I’d go for breakfast after the run. But here I was, lying on a cot in a canvas tent in northern Kenya, hours before the start of a half marathon, worrying about lions. As in: being eaten by one.

Last summer, my husband, four friends and I had traveled from San Francisco via Frankfurt, arriving late in Nairobi to spend the night before flying out the next morning in a little plane to land at Lewa Wildlife Conservancy. In other words, we were not in tiptop marathon shape—even half-marathon shape. And this was not your average, or easiest, course. Rather, it’s said to be one of the world’s toughest. At 5,500-feet elevation, Lewa was hot, dry and dusty. It suddenly dawned on me: Maybe I should have trained for this.

Team Gazelle—as we’d optimistically christened ourselves—had come to take part in the Safaricom Marathon, a meticulously orchestrated event co-hosted by Lewa, in partnership with the nonprofit Tusk, to raise funds for wildlife conservation, education and community development across Kenya. A 55,000-acre preserve, Lewa is home to 137 rhinos, 182 giraffes, 1,160 zebras, some 500 migrating elephants, 26 lions and—I was promised before committing to this harebrained idea—140 armed guards standing watch in case there’s any trouble. (In the marathon’s almost two-decade existence, though, there hasn’t been.)

Still, as I lay in the dark listening to screeching baboons, the possibility felt palpable. A few hours earlier, we’d gone out on a game drive and seen scores of wildlife: Cape buffalo, hyenas, black rhinos, white rhinos, so many rhinos. We even chased a cheetah. In the Land Cruiser, mind you, not on foot. For 364 days a year, safari guests aren’t allowed to roam free, but race day is a different beast.

I awoke before sunrise to Kenyan pop music blaring over speakers, thumping through camp, a communal call to rise. Then came the whoosh of helicopters, revving up to ready the course. Manned by Mike Watson, longtime CEO of Lewa and a rugged bushman if ever there was one, and his colleagues, the helicopters crisscrossed the landscape, hovering overhead, gently flushing the wildlife away for the day—making way for Lewa’s rarest species: humans.

Fourteen hundred runners from 20 countries—the majority from Kenya—come together for one morning every June, in the name of conservation and inspiration. Most people opt for the half, but a hardy 200 or so, including top Kenyan runners like 2016 Olympic gold medalist Eliud Kipchoge go for the full, which double-backs along the same route. There’s a 5K kids race just before it, too. Local school kids train all year in hopes of winning vouchers to the supermarket, goody bags filled with socks, pens, paper and chocolate, and to the first-place finisher: a phone.

Fueled up on bananas and coffee and what felt like a reservoir’s worth of bottled water, we laced up our sneakers and drifted down a dirt road toward the starting line, where we met up with one more member of Team Gazelle: Jacob Kanake, a Lewa driver who had worked on the preserve for years, but had never run the race before. “I’m ready!” he said. We group-hugged. A muffled voice over the speaker beckoned everyone to the start line. The Kenyan flag waved and we were off. It was a human stampede, 1,400 runners of varying levels charging the line, a simple banner propped up by two branches, revealing a dirt path no wider than a fire-road. We squeezed onto the soft, stone-strewn path—flanked by uneven ground and prickly grasses, ensuring we didn’t stray too far—and took off en masse: a scrum of sinewy Kenyans, brawny Kenyans and some barefooted Kenyans, as well as fully outfitted super-fit foreigners in dry-wick tees emblazoned with company logos, and not-as-fit foreigners, no offense to my fellow Gazelles.

And then the adrenaline-fueled din subsided into a collective quiet, everyone instantly awed—or was it daunted?—by the vastness surrounding us, by the quest before us. Behind me was a mini-platoon of rangers running in full garb with their rifles. A helicopter hovered above keeping tabs on everyone’s whereabouts—like an overly concerned parent. Soon the throngs started to split. I found my rhythm, relaxed and realized: Nothing was going to maul me.

I ran. And ran. Past the odd acacia tree and lone ostrich and pair of giraffes in the distance, rising from the ground like elegant, blinking sculptures. Spectators were sparse—a handful at the homemade spritz station; a smattering outside Kirafu, one of five lodges on the preserve. Uniformed, apron-clad staff waving, cheering. It might be Lewa’s biggest day of the year, but the Boston Marathon this is not.

I picked up speed, crested a small hill, and continued through a canopy of acacias. Soon, I found myself in lockstep with a muscular Kenyan man. We sprinted toward the finish line. We crossed together, then high-fived. I finished with a respectable 1:56:28, by no stretch the fastest woman—that went to local Betty Karambu, at 1:14:28. Soon enough, in strode lanky superhero Philemon Baaru, completing the full 26.2 miles in 2:22:18—before my fellow Gazelles even finished the half.

For the rest of the trip, we were on a standard safari—tracking leopards; marveling at lions’ manes and elephant herds; aww-ing at rhino babies—bumping through the bush in the back of the Land Cruiser. And all along, I was itching to get out. safaricommarathon.com