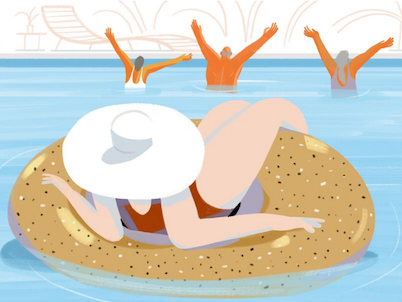 WHEN MY GRANDMOTHER died in Delray Beach, a few weeks shy of age 97, I was sad, of course. And then, as we ushered the final shiva guests out the door and into the monogrammed golf carts they’d arrived in, I realized a silver lining: A Florida without Grandma Frances, as unfathomable as that was, was a Florida I no longer had to visit.

Schlepping to the Sunshine State to see your grandparents is as much a Jewish tradition as eating Chinese food on Christmas—one highlighted by Sarah Silverman during the 2008 presidential campaign in a YouTube video (aptly titled “The Great Schlep”), in which she urged us to go see our bubbes and zaydes, and convince them to vote for Obama.

East Coast Jews have been making the trip for close to a century now. So religiously upheld is the ritual that the flight routes between New York and Florida have garnered such nicknames as the Hebrew Highway, the Kosher Clipper and the Bagel Run.

Florida and Jews wasn’t always a thing. But after the “No Jews. No Blacks. No Dogs” signs came down in the 1940s and the A/C came on, the “chain migration” of snowbirds began. As seniors set south, they realized they liked palm trees and putting greens better than snow, and decided to stay. At least until spring.

Today, Southern Florida is home to the country’s third largest Jewish population (behind New York and L.A.), with hundreds of communities lining the multilane boulevards with the same lifestyle, if varying levels of luxury, behind every gate.

My Brooklyn-born grandparents, Frances and Samuel Rubin, found their slice of retiree heaven in 1972 at one of the first, the Fountains, in Lake Worth, a series of low-slung, stucco apartments set on three golf courses, with communal swimming pools, a clubhouse and cul-de-sacs boasting exotic-sounding names like D’Este, Trevi, Tivoli.

My sister and I grew up making an annual Bagel Run from Boston during winter break. As a kid, I loved everything about Florida: The sweltering days spent under chlorinated water, timing our handstands; the candy dishes; the clink of the mahjong tiles; all those wizened women and their perfectly painted toes.

Every night, as the sun dipped behind the 13th hole, we’d devour grandma’s “Swedish” meatballs. (“How many bawls do you want?” she’d call from the kitchen). We’d nurse our sunburns, watch “Wheel of Fortune,” then wake up excited to do it all again. If we ever left the Fountains, it was only for the Publix supermarket, where I’d bask in the Arctic chill and beg for Entenmann’s crumb cake.

In my 20s, when I started traveling to truly exotic places, I began to dread the obligatory Florida Trip. So much about the place suddenly made me cringe. The sterility. The homogeny. The canasta scene. And yet, lately, I admit: I’m beginning to get it. For many secular Jews, “Boca” is a bond. My Jewish generation may hate Florida, but we also love to hate Florida. Everyone loves to hate Florida! Political strategists. Larry David. Buzzfeed’s annual “32 Unbelievable Things that Happened in Florida” lists are always a viral hit.

But for us, it’s personal. Our roots run deep. When my Canadian officemate and I first met, in San Francisco, and realized we were both descendants of the Fountains’ D’Este court, we had an instant connection, an immediate understanding of where we came from, of who we were.

I like to think of Florida’s gated Jewish communities as the modern-day equivalent of our ancestors’ Eastern European villages. Maybe the gates themselves were erected not so much to keep others out, but to keep Jews in, as August Wilson might say. Together, in a world where we are otherwise spread thin.

My cousin Emily calls Florida “God’s Waiting Room.” At 44, she’s an aspiring resident. Not me. I prefer skiing to water aerobics, seasonally-driven restaurants to multistation buffets. Still, I admit: There’s a familiar rhythm to the gated community vacation I find comforting. In its Seinfeld-meets-Truman Show way, it’s a place where nothing really happens and nothing really changes. Until, of course, it does.

Last winter, my mother reminded me: I may no longer have to visit my grandmother—but my daughter still has to visit hers.

My parents swear they never saw it coming, but somehow they succumbed to Florida’s generational pull and became snowbirds, too. “This is it,” I informed my mother. “You’re the end of the line. My future grandchildren will never step foot in Florida,” I insisted, as we watched 7-year-old Hazel do her 27th handstand in the pool. My mom and I sat with our legs outstretched, our toes painted the same exact shade.