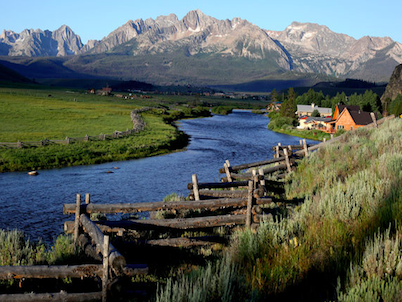 Your Own Private Idaho

The “Entering Stanley, Idaho” sign seemed more like a friendly warning than a welcome. “Population 63,” it read, as if to say: Congratulations, you’ve made it to the middle of nowhere. Stanley is the entry point to the Sawtooth Valley, a time warp of a place with four saloons, five mountain ranges and not much else. My husband, Josh, our two children and I had driven three hours from Boise along an empty, winding two-lane scenic byway for a week of summer adventure. Still, as we strolled down deserted, dusty Wall Street looking for a lunch spot, it was hard not to wonder: Where is everyone?

They certainly weren’t on Highway 75, which we followed nine miles south from Stanley along the Salmon River, until we spied our home base, the historic Idaho Rocky Mountain Ranch, hidden in the foothills of the White Cloud Mountains, with a bull’s-eye view of the Sawtooth Range. After we checked into our rustic-luxe log cabin — on a little prairie, it was one Ma and Pa Ingalls would have envied — the first people we saw not wearing cowboy boots were my East Coast family: Mom and Dad, sister, brother-in-law and their children. They rolled in as we rocked on the front porch, captivated by the view: 10,000-foot snow-frosted peaks towering behind a trout-filled pond; bright white clouds suspended in a big, blue sky; buck fences lining fields of happy little sagebrush.

The first words out of my brother-in-law’s mouth: “I feel like I’m in a Bob Ross painting.”

Various national parks had been tossed around as potential destinations for this family trip: Glacier, Yellowstone, Grand Teton. But I was hoping for something different. Can we please skip the parks? I begged. I love them in Ansel Adams photographs, but as a place to spend a weeklong summer vacation, the parks — and the bus tours and traffic, high-heel-teetering tourists and standardized cafeterias that come with them — are not my idea of good family fun. I know a place that’s just as pretty, I’d promised, but without all those people.

Established by Congress in 1972 and managed by the federal Forest Service, the 756,000-acre Sawtooth National Recreation Area, which includes the 217,000-acre Sawtooth Wilderness, is arguably more rugged and wild than any national park — in large part because it’s not one.

Annual visitation at each of the brand-name parks we had considered hovers around three and four million. (Great Smoky Mountains, in Tennessee, attracts the most, at about nine million a year.) Though equal in size to Yosemite, the Sawtooth National Recreation Area estimates just 1.5 million visitors. And since there are no welcome gates or entrance fees, Ed Cannady, the Forest Service recreation manager for the recreation area, said that figure is probably inflated, as it includes cars just passing through; he estimated the actual number of annual visitors is closer to around 700,000.

With 700 miles of trails and only a fraction of the annual visitors actually hiking them (exact statistics are not compiled), even the easiest, most accessible trails in the recreation area still feel like the backcountry compared with Yosemite’s valley floor. It came close, but the Sawtooths dodged the national park designation decades ago. And that’s a lucky thing, say locals, who proudly tout its unofficial slogan: “The Tetons, without the handrails.”

Indeed, the next day I could have used one, as I clung to the side of a boulder with one hand and sheepishly reached for my hiking guide’s arm with the other.

We were en route to a nameless high-alpine lake tucked beneath 10,751-foot Thompson Peak. The initial approach followed a sun-drenched trail through aspen groves and fields of balsam root, past views of snowy spires, until we climbed a couple of thousand feet and the trail all but disappeared, turning into a dirt-and-boulder-strewn slope, and it was time to scramble.

On the heels of our guide, Bill Leavell, a longtime local who regaled me with tales like the one about watching a wolf pack take down an elk outside his living room window, I made it across the scree, over a rocky bowl and up to the lake. It was still frozen and — with the jagged peak of the Sawtooths’ tallest mountain looming behind it — worth every step. I took a seat on an icy rock, pulled out my lodge-made turkey-prosciutto sandwich, and picnicked in the falling snow. Save for a scurrying rabbitlike pika and some well-camouflaged mountain goats, we were totally alone, as we were for almost the entire trek.

The next day, we left grandparents and kids behind (again), to hike to Goat Lake, another off-trail “attraction” in the area, still floating with chunks of ice. As we crossed creeks on slippery logs and inched along rock slabs, our new guide, Drew Daly, in his seventh season in the area, summed up what I was thinking: “If the Sawtooths were a national park this would be a paved road to a vista point; one of those 10-mile drives for a three-minute walk.” Instead, once again, on this late-June day, our foursome was the only group on a half-blazed trail.

And that’s how it was the entire week: virtual solitude in America’s great outdoors, all without having to pitch a tent (or pay five-star prices). This is what I like best about the Sawtooths: it gets the ratio of nature to creature comforts right. Chic spas and celebrity chefs? No. Natural riverside hot springs and grass-fed steak? Yes.

On a drift boat down the Salmon, we were the only anglers on our stretch of river. (I can call myself an angler, having landed a 16-inch cutthroat trout that day, right?) On a horseback ride up a hilltop, it was just us city slickers having a cultural exchange with a 20-year-old cowgirl leading the way. “What’s Twitter?” she asked, reigning in her horse, Jasper, who was feisty and, apparently, not used to groups. “What’s that?” countered my sister, pointing to a petrified mound on the ground. Cow pie, we were informed.

Back in Stanley, I was cautioned by a long-haired resident named Reno Spear at Peaks & Perks, the town coffee cart, where he’d been sitting on a milk crate for the past four hours, he admitted, admiring the mountains: “Just wait till July. It’s insane then.” Busier, yes. But I’d been here once before in July, and Stanley doesn’t know insane. “Last summer, I worked in Yellowstone,” one ranch employee said. “It was a constant stream of people asking me questions like ‘When do you release the animals from their cages?’ ”

Eventually, we found the crowds. They were at Redfish Lake Lodge, a classic family-run resort about five miles south of Stanley. “The Cabo of the Sawtooths,” Drew, our guide, had warned. Not quite, though it does have sandy beaches and all sorts of activity: tweens licked soft serve cones; couples paddle-boarded; children and dogs frolicked in the clear water, seemingly unbothered by its frigid temperature; families set up lawn chairs in preparation for a late afternoon folk singer. Backed by the same soaring peaks that seem to follow you everywhere in the Sawtooths, it was campy and fun and might as well have been 1970. Josh and I went back to Redfish the next morning to hop the boat shuttle that leaves on demand from the dock. Zipping across the lake, we left the cabins and campgrounds and RVs far behind for an easy three-mile hike up to Bench Lakes — supposedly one of the Sawtooths’ more popular, accessible spots. But on this sunny day we had it, no longer surprisingly, all to ourselves.

Josh peeled off his socks and shoes and waded knee-deep with his fly rod, casting (unsuccessfully) for trout, while I sidled up against a shaded boulder and cracked open my book. With warbling swallows as backdrop, I nodded off before I’d even turned a page.

Boise is the closest city, a three-hour drive. Sun Valley and Ketchum are 60 miles south over the Galena Summit.

If discomfort means anything but, say, the St. Regis, than the Sawtooths aren’t for you. Plenty of campsites and cabins, from ramshackle to rustic-luxe.

Something for everyone: Well-marked (though often rugged) hiking trails, rock climbing and rafting for all levels (the Salmon River is mostly Class II or III).

Where to Stay (and Eat)

Set on 900 acres, the Idaho Rocky Mountain Ranch (208-774-3544; idahorocky.com), built in 1930, features 17 hand-hewn, just-luxe-enough log cabins and four lodge rooms, a natural hot springs pool, and a front porch with perfect views of the Sawtooth Range. From $185 to $285 per person a night; includes three delicious organic, meals a day.

The Sawtooth Hotel (208-721-2459; sawtoothhotel.com; starting at $70), in Stanley, is a historic hotel and restaurant, recently renovated, that looks as if it was built out of Lincoln Logs. The same couple also owns the Stanley Baking Company, whose homemade scones and sandwiches draw the town’s only lines.

Redfish Lake Lodge (208-774-3536; redfishlake.com; from $67 a night for lodge rooms to $550 for four-bedroom cabins) is a sprawling lakeside resort, which dates from 1929, that draws Boise locals and people from all over. Skip the sit-down restaurant in favor of the gazebo serving casual fare.

The longtime hiking and rock-climbing experts at Sawtooth Mountain Guides (208-774-3324; sawtoothguides.com; from $75 a person, for a group of four) seem to know every nook and cranny of the Sawtooths.

Sawtooth Adventure Company (866-774-4644; sawtoothadventure.com; from $54), is one of several experienced white-water rafting outfitters on the Salmon.

Sun Valley’s Silver Creek Outfitters (208-726-5282; silver-creek.com; from $350 for two) has a small staff of knowledgeable Sawtooths-based guides, who all but guarantee a catch and an empty stretch of river.