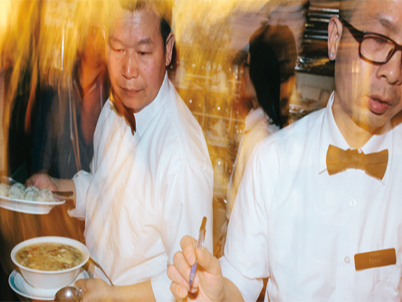 Given the feast that is San Tung, probably not. Anyway, as insiders know, it pays to come off-peak to avoid the sidewalk swarm. On Sunday nights, even takeout orders can take two hours. The kitchen often gets so backed up that the staff just takes the phone off the hook.

Which is why Mrs. Chu—Frank’s mother and the owner of the 25-year-old Chinese restaurant—tends to eschew the media. “She’s turned down all the big Chinese newspapers,” says Frank, who dropped out of college at 18, after his father had a stroke, to help run the Irving Street restaurant that his parents had opened after emigrating from Korea. “We just can’t handle it. We’re too busy as it is.”

Mrs. Chu, who at 60 presides over the register, keeping tabs on the till and her 17-person staff, would rather the focus be on her son. “Take his picture, not mine,” she says, nodding toward Frank, who is 39 and will inherit San Tung when and if she’s ready to retire.

Last year, Mrs. Chu’s youngest son, Charles, opened San Tung #2 next door in an attempt to capitalize on the original restaurant’s overflow. Her other son operates So, in SoMa (and myriad cousins run East Bay restaurants). Neither, however, has achieved the first San Tung’s cult status. “The food is similar, but they’re fancier,” says Frank, “with dim lights and stuff.”

Fancy, San Tung is not. Servers wear white button-downs and bow ties, but the ambience is all fluorescent lights, worn carpeting, and deafening din. One thousand diners a day don’t come here for the atmosphere. They come for the food—though why, exactly, remains a mystery to Mrs. Chu. “Honestly, honestly, I don’t think our food is that good,” she says. “We’re just lucky.”

Back in San Tung’s early days, the dumplings were the draw, so much so that Mrs. Chu and her sons would work until 2 a.m. every night making them. “We’d turn on the radio, make dumplings, and talk,” she recalls. “They were teenagers. They hated me.”

   Today, she hires other people to do the cooking. About a dozen staffers toil in the sprawling kitchen (which, Mrs. Chu says, is still too small). Three women pinch dumplings and pull noodles, and three cooks toss woks. And, says Mrs. Chu, one lone man fries, donning a hat, a mask, and gloves to burn through some 700 to 800 pounds of meat a day for San Tung’s signature dry-fried chicken wings.

   “Yes, I’ve heard they call it crack,” Mrs. Chu says, smiling when I mention the nickname for the chicken, which is crisp, sticky, and covered in spicy-sweet sauce. “It’s kind of a compliment.”

The sauce used to be soggier, but one night a regular complained that it was too wet. So Mrs. Chu took out some of the water and added sugar. The customer couldn’t get enough of it—and soon, neither could anyone else. Today, Mrs. Chu hears of copycats all over town. Several years ago, she actually caught one of her employees trying to teach her recipe to the owner of the restaurant across the street. “That employee still works here,” she says. “It’s OK—we all have to make a living.”

After a quarter century of working almost every day, Mrs. Chu is living what most immigrants would call the American dream. “We’ve passed the money-hungry stage,” she says with a smile. “I think we did all right.”

Frank worries, though, about the day that his mother finally retires. “It’s a lot of pressure,” he admits. “It’s one thing to build a successful restaurant from nothing. What if I take over, and it slows down?” Mrs. Chushrugs.“Keep doing what we do now,” she says. “Done.”