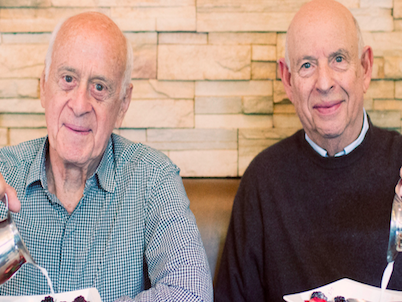 Scrawled across the chest of every server at Sweet Maple is a tribute to its signature item. “I [heart] Millionaire’s Bacon,” the T-shirts tout. Indeed, the sales tactic works—as plates of the thick, brown sugar-tinged slabs adorn pretty much every one of the twenty-five tables in the place. But not Billy’s and Bob’s.

“Pork?” scoffs Billy Cohen, when I ask if it’s the bacon that brings him and his friend Bob Bransten here every Saturday morning. Definitely not, they say.

At eighty years old, they don’t touch the stuff. Oh, sure, maybe thirty years ago—when the they were college buddies who became Pacific Heights neighbors and began what’s become a weekly breakfast tradition. Sweet Maple wasn’t always their spot. Neither can recall the name of the first San Francisco diner they went to together, just that they’ve outlived it. “Remember that other place on Fulton, where we could never find parking?” probes Bob, like one half of a long-married couple. “What was it called?”

Another of their spots was Eats, a classic on Clement Street. “But frankly, by the time we got there, it was already packed with families,” says Billy. “I don’t do lines anymore. I gave up that up in the army.”

The Internet is filled with raves about Sweet Maple (“OMG, the millionaire bacon. Let’s talk about that first!” Yelps Karen S. of Sacramento. “As I took the first bite, my eyes rolled back like I was having an orgasm.”), but for Billy and Bob, the food here is just “fine.” Ultimately, they chose it as their go-to place simply because of its size. It’s one of the largest breakfast spots in the city. Plus, they quickly figured out that if they showed up by eight a.m., they’d “beat the mobs.” After four years, the staff knows their names, their window table, and their order. “Granola and fruit, no yogurt, low-fat milk for Billy; one egg white scrambled with tomatoes and mushrooms, no toast, no potatoes, and a glass of orange juice [with a straw] for Bob,” says the smiley server as she presents their plates and refills their coffee mugs. Billy pours in three packets of Splenda and passes Bob the ketchup, which he squeezes beside his egg white. For Billy and Bob, it’s not about the cuisine, but the company.

Bob came from a big West Coast coffee family—MJB it was called; founded in 1881, it rivaled Folgers and Hills Bros. back in the day. He worked in mass-produced coffee for decades, but admits he likes Blue Bottle now. Still, he doesn’t seem to mind the generic Italian roast at Sweet Maple; he accepts a third, then a fourth, then a fifth topper.

Back in New York, Billy took his Harvard MBA to Broadway, where he was a producer. He still is, in that semi-retired, successful way. He co-produced the current hit Beautiful, about Carole King. “I’ve spent my life theoretically working in a creative industry,” says Billy, “but none of it has rolled off on me as far as my culinary habits.”

Bob agrees. “Let me suggest that Billy also likes to go to the same place at night,” he teases. That place is Izzy’s Steak & Chop House, a Marina mainstay since 1987. They go about once a month, with their wives, which means they sometimes end up eating breakfast and dinner together in the same day. “He likes the potatoes and the creamed spinach there,” explains Bob.

After thirty years sitting across from each other, there’s still plenty to talk about: They gossip about their kids (Billy’s son, who’s thirty-two, “is about to cohabit with a young woman,” beams Billy); rib each other about their prestigious business schools (“You know what they call Harvard,” says Bob. “Preparation H.”); and roar with laughter about their lucky, lackluster military experience. “My friend here, was a member of the distinguished 353rd and Leaflet Battalion!” Billy guffaws over his granola. Apparently, Bob’s role was to drop leaflets for civilians when the occasion called, but turns out his battalion never even had to do that. “They called us ‘Legs,’” says Bob, “A deprecatory term that means guys who walked as opposed to guys who jump out of airplanes.” “You know, on Veterans Day, when you’re at the 49ers game and they ask those who served to stand, I’m always a little hesitant,” says Bob. “I don’t think we’re really the ones they mean to honor.”

The real draw of Sweet Maple every Saturday, say Billy and Bob, is the desire to get out of the house, to talk, and to try to make sense of the sort of life-stuff that happens. “Let me be clear, Billy is my psychiatrist,” says Bob, only half-joking. “My wife, forget it. He’s heard all of my trials and tribulations. It’s painful, but it’s cheaper than therapy.”

Billy puts the point of their weekly breakfast date a little more bluntly: “It keeps us alive,” he says.

With collared button-downs beneath their wool sweaters, gray hairs on their balding heads, and cute comments about grandkids (Bob has six; Billy’s “still waiting”), this two-top sticks out at Sweet Maple. In fact, they stick out in San Francisco, where signs of life over sixty are becoming more and more rare. But sit and talk with these guys for an hour on a Saturday morning, and their wrinkles and their years seem to fade away. Suddenly, it’s easy to see Billy and Bob as they still see themselves.

“Sure, we have more physical concerns now,” says Billy. “But we also wake up every morning and know it’s a hell of a lot better than the alternative.” He peers around the restaurant, at the fitted plaid shirts, the soft hands sparkling with newly donned engagement rings, the new fathers cutting their toddler’s pancakes, and the hung-over crews devouring deep-fried French toast and sucking down Sweet Maple’s bottomless soju Bloody Marys. “We think, Gee, that guy over there certainly looks old, when he’s probably ten years younger!” (Or fifty years younger.)

Oh, kids today. They text and bail and reschedule and hover for hours, holding out for the perfect poached eggs at the most popular spot—but Billy and Bob know better. They know what matters isn’t so much where you go—bacon be damned—but that you show up. “We just call each other and say, ‘Eight a.m.’ and hang up,” says Billy.

The bill arrives, which they split, and scramble together a 20-plus percent tip. “I don’t like owing this guy anything,” teases Bob. It’s getting close to ten a.m. A few more swigs of coffee and the old friends shuffle out. In their loafers and pressed-yet-sagging khakis, they cut through the throngs waiting for a table, San Francisco’s hipster youth parting like the Red Sea. “What’s going on the rest of the day?” asks Bob. Not much, replies Billy. “I think I’ll go home and take a nap.”