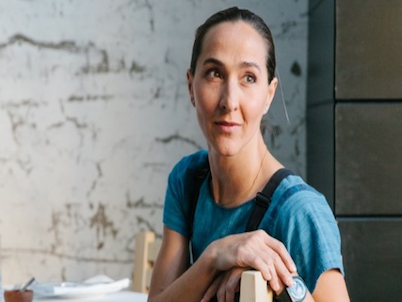 It’s not every Saturday night that San Francisco Chronicle food critic Michael Bauer is shown to his seat by a former prostitute who spent serious time on the streets. Not that he knew it. And neither would you. The woman’s smile is wide, her eyes kind. Dressed like all the hosts and servers in an embroidered black shirt custom-made in Oaxaca, Mexico, she exudes a natural warmth and sincerity not often displayed by hosts at hip, high-profile new restaurants in this town.

But Cala isn’t your typical hotspot. Opened in early October on a dark stretch of Fell Street, Cala is the first restaurant in the United States by Gabriela Cámara, the renowned owner of four Mexico City establishments. The most celebrated among them, Contramar, is revered by food-world royalty like Alice Waters and Diana Kennedy, both Cámara’s friends and mentors. “I was living happily in Mexico,” says Cámara, who moved to San Francisco last year with her then-five-year-old son. “Why would I open anything here unless it made sense socially and emotionally, and fit with who I am?”

Who Cámara is, is an extremely successful, extremely open-minded restaurateur who is willing to build her staff primarily from people with prison records and no prior experience. Sixty percent of Cala’s staff hail from long-respected halfway house programs like the Delancey Street Foundation; others essentially come straight from their cells via programs like America Works and the Community Assessment and Services Center, operated by San Francisco’s Adult Probation Department.

Many have struggled with addiction and don’t drink the mezcal cocktails they serve. Some had no idea that wine is made from grapes. “The other night, a server asked me the difference between sparkling wine and sparkling water,” says Cámara. “I don’t care. That stuff you can teach.” What you can’t teach, she says, is character, a work ethic, personality. “You can have technically perfect food, but that doesn’t make a good restaurant. It’s the people.” For her, those people are hardworking, motivated men and women who happen to have been incarcerated.

These members of Cámara’s staff aren’t confined to being part-time dishwashers: They’re full-time back- and front-of-house employees, all paid a living wage with full health benefits, a portion of pooled tips based on a point system (the restaurant prohibits tipping by customers), and a share of the restaurant’s profits. This is not a hiring model you’ll see at any other restaurant in town. Though the Delancey Street Foundation’s SoMa restaurant is staffed by former convicts, it’s a nonprofit entity that functions as a job-training center. Cala is very much a for-profit venture: For all of her idealism, Cámara is not running a charity.

And when you’re sitting in Cala’s airy, sophisticated dining room listening to a well-spoken floor manager talk about how she has found her family here, you realize how profound Cala’s hiring policy is. Cámara, spurred by her general manager, Emma Rosenbush, is, it can be said without an ounce of Silicon Valley exaggeration, changing lives.

In doing so, Cámara and Rosenbush are challenging San Francisco restaurants to think differently about hiring, an issue with which the service industry, which is suffering a labor crunch, has lately struggled. “On one hand, you can’t find people to work in restaurants because they can’t afford to live here,” says Rosenbush. “But there’s a whole population of people who can’t get work because—what—they have a record?” Rosenbush worked at Berkeley’s Prison Law Office after college and vowed that she would one day hire formerly incarcerated individuals if she were ever in a position to do so. They are, she says, “a huge resource not being used.” (Nationwide, about 60 percent of ex-prisoners are unemployed a year after release.)

Cámara and Rosenbush’s real motivation, though, isn’t supply and demand, but their desire to hire people who are a good fit for the restaurant regardless of their background. “You should see the faces of these people when they realize they are not being rejected,” says Cámara, who was hesitant to publicize her hiring program for fear that it would be perceived as a marketing ploy or an invasion of her employees’ privacy. “Emma and I are not trying to save society—we just want to work with people willing to do a good job.”

To find Cala’s staff, Rosenbush reached out to her former sociology professors, contacts from her law office days, and reentry organizations like Root and Rebound. “It went viral,” she recalls. “It was wild! I was getting so many emails and calls.” Her job post went far beyond the typical equal opportunity language: “Strongly encourage applications from people…with conviction histories.”

At least 50 former convicts showed up for an interview, many in a suit or a dress: “The non-incarcerated people dressed shittier,” says Rosenbush, laughing. A lack of experience was not only preferred—it was actually a prerequisite. “Part-time hipster servers,” says Rosenbush, aren’t sufficiently invested in their work. “Professional servers are difficult to retrain. They want to do things their way, not your way,” adds Cámara. “Servers in San Francisco don’t really give a shit. They know they can get a job anywhere.”

Cámara would rather train from scratch. That’s how she does it in Mexico. “If you’re smart, or even halfway smart but work hard,” she says, “you’re able to rise.” Still, she admits that six weeks in, service at Cala has been “a disaster.” During the restaurant’s first two months, it lost 14 of its original 33 staff, including about 10 ex-convicts. One admitted to using meth; another got a call in the middle of her shift that her brother had been shot. After two weeks of training, one of Rosenbush’s favorite hires, an honest, charming guy with zero experience, was a no-show. The reason, Rosenbush learned, was that he’d been re-incarcerated just before the restaurant was due to open.

In spite of these setbacks, to those dedicated to giving former convicts a second chance, Cala is an unqualified triumph. On its opening night, Lauren Bell, the interim director of the Adult Probation Department’s reentry division, was filled with pride watching her clients drape white linen napkins over their arms and pour water. “What Cala is doing is revolutionary in such a simple way,” she says. “It is putting people used to being on the sidelines of life front and center, with people looking right at them, people with deep pockets. It’s making them feel like they’re taking their first steps toward flying.”

Sabrina Reid certainly feels that way. “I’m managing the floor of a restaurant. That’s insane,” she says. “I’m being interviewed for a magazine. Never in my darkest days…” Reid, 46, became addicted to heroin as a teenager and spent the next 25 years in and out of federal prison. During the last five years, she ran private dining at the Delancey Street Restaurant, whose proceeds go directly to feeding, housing, and training Delancey residents, readying them for the “real world.” Rarely, though, are graduates really welcomed—at least not into San Francisco’s rarefied version of the real world. But Cámara and Rosenbush were literally waiting with open arms. “After our interview, it felt like we’d known each other for years,” says Reid. “We were hugging and jumping up and down. I was like, this has to be too good to be true.”

“There’s always drama in the restaurant industry, but this has been another level,” says Cámara. That said, it hasn’t always been the bad kind. As I interviewed Reid, she glanced over my shoulder and suddenly excused herself to greet a young woman who’d wandered in for brunch. “Wow: That’s Sabrina’s daughter,” Cámara told me. “She hasn’t seen her in eight years, I’m not sure what else I can tell you. That pretty much says it all.”