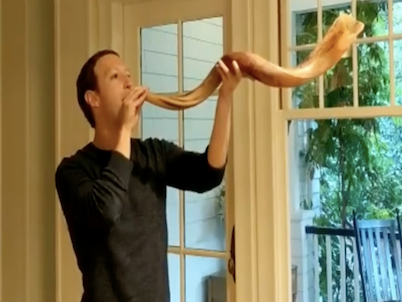 Is the Shofar … an Instrument of Technological Disruption?

Sure, it’s been around since biblical times, but suddenly the shofar is trending among Bay Area billionaires.

Well, O.K., only two leading tech C.E.O.s of our time have revealed that they are quite skilled in the most analog of instruments. Still! Their mothers must be so proud.

On Sept. 10, the 34-year-old founder of Facebook posted there a video of himself tooting his own ram’s horn in the comfort of his home in Palo Alto, Calif. “Mark Zuckerberg is celebrating Rosh Hashana,” read the status update, complete with an apple-and-honey emoji.

He huffed and puffed an impressive tekiah-teruah-shevarim: a series of staccato blasts followed by a longer high note, as per tradition. Unintentionally adding an extra fillip: his 1-year-old daughter, August, wailing offscreen.

As of Monday, the day before Yom Kippur begins, the clip has received some 1.4 million views and 13,000 comments on Facebook. (Although an earlier post of his baby goat standing on top of a tortoise got more.)

“I got a little carried away on my Teruah,” Mr. Zuckerberg posted.

Another commenter tried to comfort him: “Your terua was perfect.”

Heartfelt wishes for a “happy, healthy!” poured in from around the world, along with a healthy dose of criticism. “Dear Mark,” one person posted, “I wish you new algorithms.”

Others offered fun shofar facts, pulled from Wikipedia: Apparently a call once recorded by composer Elmer Bernstein for Cecil B. DeMille’s 1956 “The Ten Commandments” was later used by sound editors in “Return of the Jedi” as the cry of the Ewok battle horn. (Currently available as a free ringtone, as is the Shofar itself.)

A man from Cairo posted a fair question: “What is Rosh Hashana?!”

Apart from rushing Alpha Epsilon Pi, a Jewish-oriented fraternity, at Harvard, Mr. Zuckerberg wasn’t always so audibly observant. Fatherhood, the attacks in Paris, the rise of anti-Semitism, all influenced him, Mr. Zuckerberg has said. Last year, on Yom Kippur, the Day of Atonement, he asked for forgiveness for Facebook’s sins (on Facebook).

Then there’s Marc Benioff, the C.E.O. of Salesforce, the cloud computing company, who recently with his wife made news by buying Time magazine.

While Mr. Zuckerberg was blowing his shofar before a virtual crowd, Mr. Benioff, 54, was blowing his own, in a San Francisco synagogue, before the city’s largest congregation, and one of the oldest West of the Mississippi.

Backed by a talented guitarist, the holy ark and a toddler wielding a purple plastic horn, Mr. Benioff raised what looked like the shofar of all shofars: a long, curled, hollowed-out horn. With cheeks and chest full, he exhaled a tekiah-gedolah as well as any of the talis-draped rabbis beside him.

Around 5 o’clock, Mr. Benioff and some 700 members gathered at nearby Baker Beach to cast away the sins of the past year and usher in the next. Beneath September’s glowing sun, the burnt-red Golden Gate Bridge as a backdrop, they tossed birdseed (bread crumbs are so 5778) into the Pacific, drank rosé and blew shofars above the crash of the Pacific.

Afterward, San Francisco’s Jewish community continued to kibbitz, but Mr. Benioff wandered off. Wearing billowy white pants and one of his signature fuchsia Tommy Bahama shirts, dog leash and shofar in hand, he headed home through the sand to prepare for his own high holy day, happening next week: Dreamforce, the technology conference.