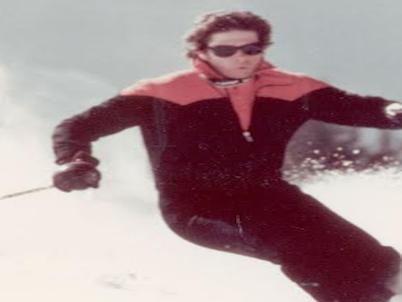 How Was Your Day … Quadriplegic Dad?

Well, I stay in bed more often than not lately. Getting up doesn’t happen very quickly. I’m on a ventilator. I need round-the-clock care. Sometimes I’ll sit at my computer or go into town for lunch with my wife, Marion, but I can’t eat much anymore. I used to love a good steak, foie gras, homemade popcorn.Now I drink Ensure.

I also used to be a skier. It’s been 33 years since my accident. I wasn’t supposed to live this long. At 69, I’m supposedly the longest surviving quadriplegic, but I don’t know for sure. I moved to Vermont back in 1965 to ski — and to go to college. Goddard was one of those avant-garde schools, you know, where anything goes: coed dorms, plenty of dope, your own self-designed curriculum and class schedule. You took what you wanted, when you wanted, and I arranged it so I had plenty of time to ski.

I worked as a bellhop at the Lodge at Stowe and got free lift tickets. I skied pretty much every day. I loved the snow, but I liked adventure better than school. A year later, I went to Iceland and worked on a fishing boat … then I went off to London and worked as a waiter at the Playboy Club. I actually tried to get into England’s Royal Academy for acting, but when that didn’t work I went back to being a busboy and a ski bum in Vermont, in the Mad River Valley.

I was footloose. I became a ski instructor and a bartender; I was a pretty popular one, I’ll admit. It was Sugarbush, in the ’70s, and everyone dated everyone. In the winter of ’71, I met a beautiful woman named Barbara; we dated for three, maybe four months. She was a ski instructor, too. It was a fling; and at the end of the ski season, she just disappeared.

After eight years as a ski instructor, I took a job as a sales rep, pedaling skis for Elan. I was pretty good at it so they sent me everywhere: the Midwest, NYC, the Lake Placid Olympics, Colorado. One day, in Aspen, in 1982, I was out skiing with a couple of friends — and, all of a sudden, I just fell. When I woke up I couldn’t move. I couldn’t breathe. I couldn’t feel anything. I was numb. And I just knew.

I was paralyzed from the neck down. I was 36 and single and I would never ski again.

Marion and I had dated for a bit back in Vermont, in 1981. When she heard about the accident, she came out to Colorado to visit me. She came a few times over the years, and eventually we started dating again. She had two young boys at the time. I had my condition. And I proposed. We got married in 1992 and moved back to Vermont, to Stowe. I ended up adopting her children later. I remember the judge asked, “Do you have any other children, Les?” I’d laughed. C’mon, I couldn’t have kids.

Then in the fall of 2008, the phone rang. Marion answered and hooked me up to the line, and the woman at the other end asked if I knew someone by the name of Barbara. I said, yes, I used to. The woman said she was calling from an agency in New York, that they’d hired a private detective to find me. She said there was a child. A child that could be mine.

It was mind-boggling. We did all the tests and blood work, but when I saw the picture, I knew.

A month later, this smart, beautiful, 36-year-old woman from San Francisco named Katrina walked in our door. She was a gift from heaven. Truly. A skier, too, raised in Manhattan. And she looked just like me. Her first words, she joked, were: “Can I borrow the car?”

I’d remembered I’d seen Barbara, once, in the ski line, a few years after we’d broken up. We just nodded at each other through the crowd. I don’t know why she never told me. I wish she had.

Katrina moved to Vermont a few years ago. To get to know me, she said, which made me feel like a billion dollars. She lives down the road now. Still, I am very sorry I missed something so huge in my life. And in hers. I would’ve given my right arm to watch her grow up. I would’ve given both arms, actually. They’re dead weight at this point.