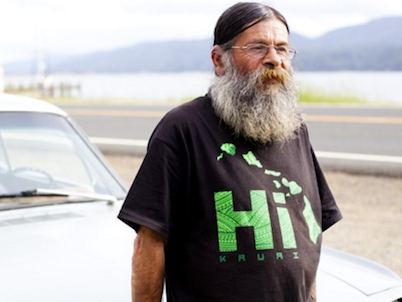 How Was Your Day … Last Coast Miwok on Tomales Bay?

I’ve been in my Winnebago all morning watching Buffy (Season 6). My daughter bought me the entire VHS set for my birthday and I’ve been burning through it. Not much else to do. I roll my own cigarettes, I fill them with pipe tobacco. I’m a smoker. I’ll smoke anything. I don’t have a phone. No email. People knock on my door or leave a note if they want to find me. I’ve lived here on Tomales Bay for 61 years. I don’t like to mention it to everybody, but I have.

Usually sitting here outside in this La-Z-Boy I got from my neighbor. He said he slept in this more than his bed and I believe him. God, is it nice. This spot is protected from the wind. So I sit here, smoke, and look at the water. Watch the tourists speeding to the oyster farms. I’ve got my own oysters, growing on the dock across the road. When the wind blows, a lot of the times one of the Hog Island sacks will break away and they’re floating, and I just pick them up. Free oysters.

A while back, I worked at the Bohemian Grove up in Monte Rio, splitting wood and driving around members. Like Ronald Reagan and Clint Eastwood, and a retired Supreme Court judge who gave me $400 for picking him up. Now I drive old people around, a few locals from here. I drive my neighbor, he’s about 100 years old. I take him over the hill, to Trader Joe’s, doctors’ appointments. Last time I drove him all the way to Novato for an ear test. Five hours and he only paid me 20 bucks.

My son and his wife live in this house 5 feet away. I’ve got my trailers. My grandfather came from Italy all the way to Ellis Island and then here, to Tomales Bay. There were a lot of Italians here. He was a rum-runner during Prohibition. My grandmother grew up in this A-frame across the road, it was built in 1864. I didn’t even know my grandmother was half Indian, Coast Miwok. She never mentioned it until she was on her deathbed.

Then she filled out all the papers, so now we’re connected with the new casino they built in Rohnert Park. We got two free days there before it opened up. Me and my friend were invited to the opening party. We got to eat all the food that was in there. They brought it to us, we didn’t have to move. God, they brought these pot stickers … the Indians throw fun parties.

I don’t know much about the Coast Miwoks. They ate the little oysters, the Olympians. After they finished shooting us and doing all the crap to us, there were only about 15 of us left, as far as I know. They say there were more Indians here years and years ago than there are white people now, which must have been a lot. They said they owned more land than anybody too, all the way to the Golden Gate Bridge and way up north. Now we don’t own crap. Now we’ve got a casino.

I asked them, “How much do you think my share will be after we pay back the government?” About $10,000 or $12,000 a month. Jeez, after I got up off the floor, I said, “You’re going to put me in a higher tax bracket.” I just want to collect one share and go to New Zealand. And if I die after that, I’ll be happy. Did you see Lord of the Rings? All that land was New Zealand. It’s beautiful … but I’d go just for Hobbiton.

I’ve been looking at this bay for years and years and years. Sometimes I take it for granted, but usually when I’m gone and I come back, it’s like, wow, like new again. That’s a good view. And one of these days, they’re going to charge me for it. Don’t laugh. They do that.