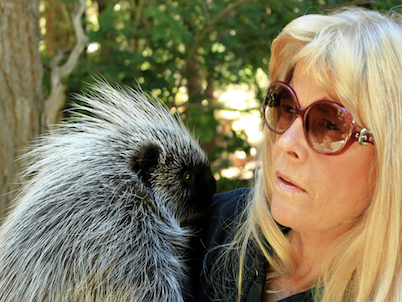 Help! There’s a Bear in My Airbnb

Ann Bryant’s phone rings all season long. She has four phones, actually, in her Homewood, Calif., home office, and they ring 24 hours a day. “Sometimes all at once,” says the executive director of the Bear League, a community-based nonprofit that aims to educate the human public about their animal neighbors. Its tagline: “People living in harmony with bears.”

The thing is, though, people and bears are living not so harmoniously these days — which is why Bryant is busy. She operates what is basically a 911 service for people’s bear-related emergencies.

And in Lake Tahoe, people have a lot of bear-related emergencies. Home to some 300 bears in the summer months, the popular vacation area swells with second-homeowners and car-campers and Airbnb-ers, many of whom do not always understand the proper protocol for visiting bear country.

“Fifty percent of the time we coach idiots,” says Bryant. “I could tell you crazy stories all day.”

There was the guy who left a trail of cookies in his yard, leading into his living room, because he thought it would be fun to get a picture of a bear eating cookies on his couch watching TV. We had a father at a campground who put peanut butter on his child’s face then stood him next to a dumpster filled with food, and waited for a bear to come and lick it off so he could get a photograph of the bear “kissing” his kid. That sent us reeling. Another father, of an 8-year-old, put food in his daughter’s hand, then filmed her feeding a bear, like it was a dog. Bears are not dogs.

Shockingly no, but the parents should have gone to jail for endangering a child, and a bear. We don’t want people to get hurt, but we also don’t want bears to get hurt.

Why do people want bear pictures so badly?

People don’t understand. They have a city mentality; they’ve grown so out of touch with the natural world. They come up here and they think it’s a controlled environment. Like a zoo. I’ve gotten calls from tourists asking: “What time do the bears come out?” Or, “Where can we go to see the bears?” Or they’ll say, “I just saw a bear in the woods behind our rental cabin. You need to come get it, and put it back in its crate.” I have to tell them: These are wild bears, and they’ve lived here long before we did. This is their home, too.

What do most renters do wrong?

People leave dinner on the deck and trash cans in the driveway. So the bears come. Then those people leave, but the bear keeps coming back, because the previous guests fed him for the last four days! People come here to hike and water ski and have fun and they just don’t think about it. They go off to the beach and leave the door ajar, or a window open, and then they come home — or wake up — to a bear eating everything in the kitchen. They might remember to put the garbage in the bear bin, but then they’ll forget to lock their car. We had a big rampage recently of bears getting into unlocked cars. All it takes is a pack of gum in the console. A bear can open a door, like a human. Then the wind blows it shut, the bear gets stuck inside, and the car gets destroyed. Visitors might learn by the end of the week, but then they go home, and the new renters arrive. It’s an endless cycle of ignorance.

What can homeowners do to better secure their homes?

Bird feeders are the biggest culprits. Get rid of the bird feeder. If you feed the birds, you’re feeding the bears. A lot of older cabins are nothing more than cardboard boxes with single-pane windows. You need double-pane windows, solid doors, electric doormats — otherwise known as “unwelcome mats.”

Is the problem getting worse?

It gets busier every summer. When I first started the Bear League 20 years ago, we’d get about five calls a day. Today, we get about 200 calls a day. People panicking — “A bear keeps coming into my backyard!” — and they don’t know what to do.

Or they’ll hear noises in their house and think it’s a bear. Or sometimes they’re upstairs sleeping and don’t realize until morning that a bear broke in. Bears break in to homes around the Tahoe Basin every single night.

When people call you for help, what do you do?

I’ll head right over and check out the scene. If we get a case where there’s a bear on the premises and it won’t leave, it’s usually because it’s a mama with cubs. I’ll go and get everyone away, so she can get her cubs down from the tree safely. If there’s a bear under a deck, I’ll crawl under there to see what’s going on. Sometimes I’ll use a paintball gun to scare them off.

Do you get scared?

No, it’s the bears who are scared. I can read a bear’s mood, its body language and facial expressions. I know what a bear is thinking. I was a wildlife rehabber. I’ve dealt with all kinds of wildlife. Raccoons, squirrels, whatever animals are native. An injured pregnant porcupine once needed my help. I’ve raised Maude (pictured), since birth. She was born in my living room.

What if you can’t get there?

I can’t be everywhere! I have people, wildlife lovers all around the lake, who are trained to help. But if you see a bear on your deck, or hear noises and think there’s one in your house, just stomp and yell and bang. As soon as you do, the bear usually leaves. Black bears are big chickens. They’re really easy to chase off — just don’t get in their way.

This interview was edited and condensed for clarity.

Rachel Levin is a contributor to the Travel section and the author of “LOOK BIG: And Other Tips for Surviving Animal Encounters of All Kinds.”