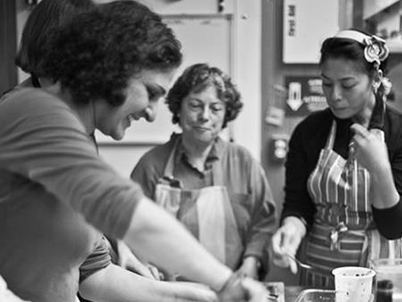 The Joy of Cooking with Samin

When Samin Nosrat wants something, she writes a letter — a real, old-fashioned, heartfelt letter.

“I’m an insane stalker person,” says the 34-year-old cook/writer/surfer with a laugh. “I find people I admire and I just want to be near them. I want them to be my teacher.” So, (novel idea) she simply asks.

And because she is the kind of huggy, happy, highly talented person people want to be around too, they inevitably say yes. Benedetta Vitali. Alice Waters. Michael Pollan. Strangers turned mentors, all. It’s Samin’s way with words — and food — that has gotten her where she is on this sunny winter day: blissfully barefoot in her cluttered Berkeley, California kitchen, toiling over her white Frigidaire stovetop. And laptop. Hard at work on what could be The Next Great Cookbook.

Salt, Fat, Acid, Heat: The Four Elements of Good Cooking will be published in 2016 by Simon & Schuster — to the chagrin of a dozen or so houses that lost the bidding war in March. The lucky winner? Editor Michael Szczerban who happened to write Samin a genuine letter himself that brought her to tears.

As did the enviable advance, which has allowed Samin to make writing this book her full-time job. Prior to the deal, she was scraping by on $17,000 a year. “Now I’m going to buy sea salt!” she cried to a friend the morning after the sale.

“Once you understand the four basic principles of salt, fat, acid, and heat,” she promises, “you’re no longer a slave to step-by-step recipes.” Samin’s 50 recipes will be mixed with musings, science and personal stories — and, best of all, only call for ingredients you already have on hand. No buttermilk? Try milk squeezed with lemon instead. No need to buy pecorino and Parmesan; Samin would never ask you to do something so… annoying.

Born in Southern California to Iranian parents, Samin was a “food-obsessed” kid who grew up eating her mom’s Persian equivalent of PB&J: cucumbers, grapes and feta on lavash. “My lunchbox didn’t look like everybody else’s,” she says, “and I loved that.”

At age 19, she and her UC Berkeley boyfriend saved up for a special dinner date at Chez Panisse. “I’d never eaten in a fancy restaurant. I had no idea who Alice Waters was or why this place was famous, but we got dressed up, and ordered wine and ate chocolate soufflé,” recalls Samin. “With milk! I ordered milk!” she says, laughing, still mortified. “The meal… the service… It was life-changing.”

The next day, she wrote a letter, pleading for a job as a busser, and was hired on the spot. “I remember vacuuming the downstairs dining room and feeling so honored. Like, I can’t believe they’re letting me vacuum the floor of Chez Panisse.”

Soon enough, she pestered Christopher Lee at Chez to pleaaase let her into the kitchen, even though she had no prior cooking experience. He sent her home with a pile of books, told her to practice, and a few months later, let her peel onions. The rest is culinary history.

Her career includes making pasta and plucking duck feathers in Tuscany; cooking with Lee at Eccolo; and hosting monthly dinners at Tartine that became one of the hottest reservations in town. She also put on a popular “pop-up general store” in Oakland that brought farmers and chefs and consumers together and influenced the launch of Good Eggs, the fast-growing local-food start-up she now advises.

All along, Samin had her heart set on her next guru: New York Times best-selling author and UC Berkeley journalism professor Michael Pollan. She wrote him an impassioned plea asking to audit his class — a class with, sorry, a waitlist of hundreds of (paying) students. But her persistence and clear sense of community purpose paid off. She became a star pupil, and not just because she brought in piping-hot lasagnas.

And then…the student became the teacher. When Pollan wanted to learn how to cook for his latest book Cooked (2013), who better to teach him how to braise than Samin? Soon, she was showered with notes herself. The time was ripe for Samin to put her decade-old book idea — one she’d had brewing since her early days at Chez — down on paper.

But first! She had one more “stalker letter” to write. To San Francisco illustrator Wendy MacNaughton whose smart, whimsical work she’d admired from afar. “I wanted light-hearted, timeless illustrations — not photographs. I didn’t want people feeling bad when their dish doesn’t look like the picture,” she says. (Thank you.) “Wendy can find the beauty in anything.”

MacNaughton draws meticulously, and quickly, and always from life, as Samin chops and stirs and squeezes — say, water from balls of chard for cucu sabzi, a Persian frittata so green and delicate, it’ll ruin those eggy French things forever. True collaborators, they share hearty laughs and a love of Bud Lite Lime, which they often sip while working in MacNaughton’s kitchen. (More mod, less messy.)

Once the book comes out, Nosrat plans to resume teaching at places like 18 Reasons and San Francisco Cooking School but also take it on the road into low-income communities and food deserts everywhere. “You are afraid to cook? You only make mac n’ cheese from a box? I’m here!” she says. “I want to connect with you. Whoever you are.”

Pollan, for one, has no doubt she will.“Samin is eloquent, passionate, and clear,” he says. “Her literary gift is to be able to recreate these qualities on the page.”

Samin, however, is still a little overwhelmed. “Man, I’m like a brown girl who grew up in San Diego in the 80s,” she says. “My whole life I’ve been an outsider wanting to be accepted by the mainstream.” And now here she is, an Iranian-American woman with a big personality and even bigger heart, on the cusp — if publishers’ predictions are right — of being a nicer, more talented Rachael Ray. A more approachable Alice Waters. The next … Julia Child?

But Samin’s goal isn’t to become a household name. “I want more people to cook,” she says. “When I show someone how to properly use salt, it’s like crack. Their mind is blown. I want to be the teacher that, you know, gives you the thing and sends you into the world.”