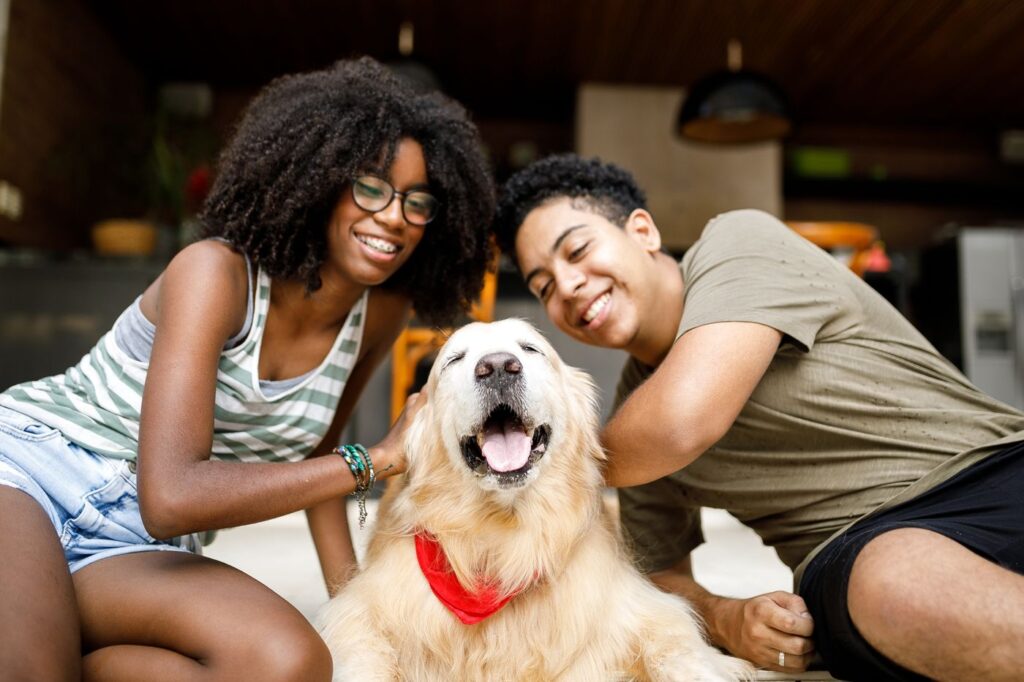 Maybe I’m a monster, but all the posts of pandemic puppies have annoyed me. As have the calls from friends that precede them. “I’ve got news!” no longer applies to just engagements and pregnancy but rescue mutts and $4,000 bernedoodles. It’s not that I don’t find all these new dogs adorable — I do. It’s just that with everyone I e-meet, it feels like I’m one step closer to succumbing to my family’s command: that we get a dog, too.

Thirty-one days into quarantine, they ambushed me after the 31st dinner I’d cooked in a row, with a PowerPoint presentation entitled “WHY WE SHOULD GET A DOG,” littered with pictures of irresistible pups and prayer-hand emoji. My sweet little 11-year-old daughter poured her heart and soul into these slides and argued her case like an extra-small RBG, and still: Being the cold-hearted mother I guess I am, I remained unconvinced. And told her so. And made her cry.

I didn’t want a dog pre-COVID, and I don’t want one post-COVID, though I admit I can see the appeal of a dog mid-COVID.

The begging continued. My kids told me I’m “ruining everything.” In the heat of quarantine bliss my husband said he wants a dog so that when we get divorced he has someone who loves him. Around Day 120, I semi-acquiesced: Okay. We can get a dog, I said, on one condition — and one word: DOGSHARE. Part-time. Splitsies. A cuddly King Charles or bark-y beagle, maybe even a giant Newfoundland (please God, anything but a golden retriever) that will shuttle evenly between two loving, likeminded homes, like the child of an amicable divorce. My friend Samantha is onboard. She lives by San Francisco’s Ocean Beach. Our urban dog would have a beach house!

It’s an idea I’d been chewing on for a while. It sounds dreamy. All that puppy love and affection for half the price. The pros appear plenty. Week on, week off. No $35/hour dogsitters. No pleading with friends to pleaaase watch Wobbles. We could hike any trail! Loll on any beach! Rent any Airbnb. Fly back east to visit family without spending money to board a dog and a plane. The cons seemed nonexistent, until I started talking about it. “Once you have a dog, you’re not going to want to share her,” warned Nina, snuggling her new Cockapoo the other night on Zoom. “It won’t know its true owners,” counseled Maddy. “The dog will get confused.” Bullshit! (Which, I declared, I don’t want to pick up either.)

I rang a professional dog person. “Am I being selfish?” I asked Clive Wynne, a behavioral scientist, founding director of the Canine Science Collaboratory at Arizona State University, and author of the 2019 book Dog Is Love. “Oh, I don’t think so,” he assured. “Dogs experience strong emotional connections, but they also come into and out of relationships easily.I see no reason at all that a dog couldn’t find it tremendously satisfying. I bet the dog would be thrilled!”

In his three-decade career, Dr. Wynne has never known anyone to dogshare, he said, but it sounds like a decent antidote to the modern ill of dog loneliness. In normal, non-quarantined times, “We bring dogs into our busy lives, then treat them like Wii consoles,” he said. “Alexa doesn’t get depressed if you don’t speak to her for a week, but a dog does.” A dog shared across two parties, he reasoned, is better than a dog too often ignored by one. After all, what will become of all the pandemic pups once the pandemic ends (if it ever ends) and their owners get back to their busy lives?

After mulling it over, Cameron Woo, co-founder of long-running magazine The Bark, agreed. “The traditional concept of the nuclear family has been turned upside down … What we consider a traditional dog’s family could, too.”

Woo certainly has a point.Why, in a world where we share cars and houses and clothes, hasn’t this clearly win-win notion of dogsharing caught on?Services like Copuppy and Let’s Share a Dogcropped up several years ago, allowing strangers to enjoy a furry fling for a walk or a weekend, but neither ever really took off. Breakups often lead to embattled co-custody of pets, and the legal contracts that go with it. So why not two families willing to share a Fido — forever — from the get-go?

“It’s not the dogs, it’s the humans,” said Dr. Wynne. Consistency is key for dogs, which calls for agreement among people. How many walks a day? Is the dog allowed on the couch? At the table? Is that $7,000 surgery necessary? Dogsharing wouldn’t work for everybody, he warned.

It works for Heather McIlhany. “It’s the freaking best,” said the D.C.-based marketing executive. She and her ex-boyfriend share two Jack Russell mixes, swapping every week and splitting all expenses. Just because she loves having her dogs half time doesn’t mean she loves them any less, she points out.“A dog shouldn’t be treated like an end table. When I’m with Cora and Crash, we go for long walks. But they also puke on the couch, bark at every falling leaf. If I had them every week, it might feel like a burden.” Sure, she gets “a little pang” watching the dogs run into her ex’s house, nary a look back, and since the pandemic began it’s been lonelier. But then they’re reunited and it feels so good. “I tell everyone they should set their life up this way!”

For Lulu, a French bulldog in San Francisco, it’s been fabulous.“She has two families,” said Suma Gona, a psychiatrist. For the last ten years, they’ve split the week with another couple. “I thought it was crazy, but they just fell in love with Lulu. They take her to acupuncture! She has this whole other life!” At 14, it has also been a long life. No doubt due, in part, to all the attention that’s come from their unique arrangement — which will likely expire with Lulu. “The kids want to get another dog, but I don’t know …” said Dr. Gona, considering the full-time commitment. “That would be a lot.”

My fear exactly. Dogs are work! I whined to Dr. Borns-Weil. “Well, I also have a ball python,” she offered. “They like to wrap around your arm and you only have to feed them once a week.” (Albeit “a defrosted medium-size rat.”) I floated the option to my family.