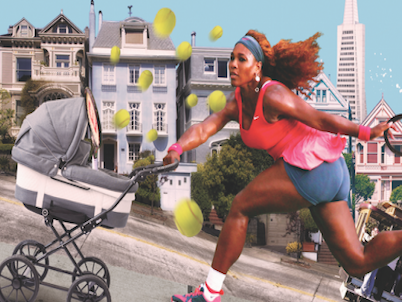 Congratulations! You’re pregnant (due in late August). We’re so excited for you. And for us—it’s been a while since we’ve had a non-tech celebrity in town, and with a baby to boot!

Rumor has it that you and Alexis [Ohanian, cofounder of Reddit] are putting down roots and raising your future Wimbledon champ in San Francisco. You have been spending an awful lot of time here lately,crashing a tennis game in Dolores Park, chasing down a phone thief at Mission Chinese, joining the board of SurveyMonkey. You even recently admitted you’ve been “craving tacos”—tweeted like a true local!

Before you officially move in full-time (fingers crossed), there are some things you should know about what it means to raise a kid in S.F. For starters, there are the hills and the kid-unfriendly restaurants and the absolute dearth of teenage babysitters (they’re all too busy mastering Mandarin or plotting Stanford acceptance strategies to wipe your baby’s ass). And there’s the side-eye you’ll get for breastfeeding in public, even though if you don’t do it, you’re a criminal.

You’ll figure all that out, no doubt. But since you’re so busy, I’d like to let you in on some facts of parental life in San Francisco:

• It’s just a fact that before your child learns to tie his or her (we’ll go with her) own laces, she will spy, with her little eye, wrinkly penises and silver spray-painted penises and double-XL penises poking through black leather straps.

• She will not be assigned to a public school you like, but to one you vehemently don’t like on the opposite side of town. (This may not be an issue.)

• She will never learn to swim, unless you commit to attending a 30-minute swim class at noon every Saturday for three years.

• Her first word will be doggie, and she’ll use it every time she sees that dude who hangs out across from the Haight Street Whole Foods yelling at his two pit bulls.

• She will correct your composting and yell, “Jackson says that’s poison!” every time you pass McDonald’s.

• She will understand how two women make a baby.

• She will specifically request sashimi, not nigiri; shabu-shabu, not soup dumplings.

• Before naptime, she will play at a playground with sweeping views of the Golden Gate Bridge and clamber over Andy Golds­worthy art in a national park.

• She will live in a blissfully foggy bubble, and you will worry, with friends over a bottle of Soave brut at the new champagne bar in Hayes Valley, that maybe she should live among people with varying viewpoints on topics like guns and Trump and climate change, but then you will remember that you don’t want her to live among those people.

• On Halloween, she will dress up as something super clever, like a little old lady fighting eviction, and she will think trick-or-treating means scrambling for candy as it’s shot from a homebuilt cannon above a garage that has been transformed by Burning Man veterans into an old-time saloon serving artisanal whiskey so parents can have fun, too.

• On April 20, while watching a never-ending stream of people entering Golden Gate Park from her car seat, she will tell you, “It smells like a skunk,” and she will explain that it’s because it’s Mary Janna Day, a holiday where people burn leaves.

• On her birthday, you will suggest a picnic at the park, but she will ask for a party at Pump It Up or House of Air, also known as Hells on Earth, where all the other parents have their kids’ parties—except for those parents who transform their Calistoga compounds into Moana movie sets, complete with virgin mai tais, handmade grass skirts, and a performance by Auli‘i Cravalho herself, just because they met her the other weekend in Hawaii and thought it would be fun.

• And on every Martin Luther King Jr. Day, she will carry a handmade sign that says “Always Share” and “Be Kind to Everyone,” and she’ll march around the block singing “This Little Light of Mine” with her classmates of all colors as bystanders wave and Muni drivers honk and shopkeepers smile. Because peace and love and equality is what her preschool—like San Francisco itself—preaches. It’s a really great school. If you can get in.

I think you have a good shot.

P.S. All my friends have moved since they’ve had kids. Can we hang out?