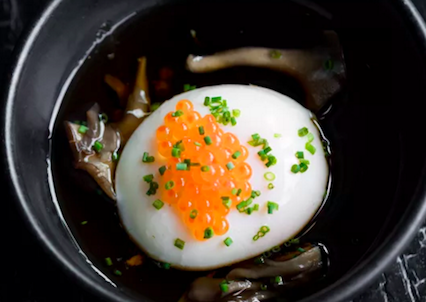 It felt, at first, a little bit like flying first class. In part, because of our seats: comfy, caramel-colored leather cushions that would fit right in on row 2A. Then came the hot towels, followed by the soothing voice of our server inquiring whether we’d like something to drink.

Yes, please. The tightly curated beer list, minus the standard Sapporo, was calling. Then again, so was the sake. I started with the “72 Clocks” Daiginjo, which refers to the time it takes the Hiroshima-based brewery to polish the rice. It came in an earthy, mini-ceramic pitcher that emptied far too fast for $19, accompanied by a feather-light glass as delicate and clean as the sake itself.

Robin’s omakase-only menu bridges Japan and California as smoothly as an A380 Dreamliner, but otherwise any similarities to the in-flight experience ended as soon as the first dish (of at least a dozen) landed on the table. Airplane food this is not.

It’s the kind of sushi experience San Francisco has long lacked: one that’s neither austere nor Ace Wasabi. Where going out for serious fish doesn’t have to mean a boring menu, bright lights, and brisk service and an unpretentious, dimly lit, sexy scene doesn’t have to mean sake bombs and monster-sized, cream cheese-stuffed maki rolls named after aging rock stars.

It also means spendy. Robin charges $79 dollars (and up) per person for 15 or so pieces. Tack on an additional sea urchin dish — or five — and suddenly your tab goes from a $200 treat to an oops-we-just-spent $500 event.

But compared to other top omakase spots in the city, the procession of dishes is a solid value, especially when it includes a velvety A5 Wagyu, gently seared, and streaked with Half Moon Bay-cultivated wasabi (that’s been grated on shark skin, by the way), then showered with frozen foie gras “snow.” As well as a bowl of hand-pulled chilled sesame noodles blanketed with Australian black truffles. And uni. Lots of uni. Premium stuff, plucked off coasts everywhere, from Santa Barbara to Baja to Chile, to yes, Hokkaido.

Plus, it’s cheaper than therapy, which is also what my two tableside evenings at Robin brought to mind. In his calm, caring way, our sushi server felt more like our sushi therapist. He leaned in, stared into our eyes, and asked the hard questions: Do we prefer fatty and rich? Or lean and clean? What don’t we like? How do we feel about raw meat? And above all: Are we even uni fans?

I am. My friend was not. “Oh, Adam converts people,” he warned. (Not her: even the creamy, dreamy uni-topped wagyu tartare on a crisp, toasted nori chip with Asian pear, failed to win her affection.)

Adam, as in Adam Tortosa, Robin’s chef-owner who cut his toro in LA under Katsuya Uechi. (And keeps a framed, signed letter from him in the loo to let you know.) He spent the last two years honing his skills at Akiko (which is now my second favorite sushi place).

Robin’s sushi bar — a wide, beautiful slab of slate set just above the wood bar, so diners can watch the four-man team slicing and molding, tweezing and torching — is unlike most sushi bars of its kind. Most obviously because it’s run by a white guy.

One who looks like a younger, blonder Seinfeld’s Cosmo Kramer. And who has the utmost respect for Japanese tradition. He just isn’t wedded to it, as evidenced by his ingredients on display: hunks of fresh peaches; purees of Granny Smith apples; a tray of house-made potato chips; plastic containers of tomato confit and charred salsas; a lab-like line-up of squeeze bottles filled with ponzu and aged soy alongside heretical horseradish-based sauces. (“Why don’t sushi chefs use horseradish?” he pondered aloud. “It’s like America’s wasabi and no one touches it!”)

Also baffling to Tortosa: sushi chefs’ reliance on fish from Japan. “I don’t know why people don’t use the fish off our coast,” he said, slicing us the buttery-smooth belly of an albacore caught this morning on its way up to Canada. “I mean, it’s right fucking here!”

He laid a sliver of local fig across a steelhead from a sustainable trout farm up in Lassen. He spooned a serving of smoked white sturgeon caviar from Sacramento onto a ramp aioli-dipped house-made potato chip. He painted a fat, creamy slab of uni, from Fort Bragg, with a sticky-sweet, sunny-yellow shiro dashi-emulsified egg yolk that, together, tasted like I’d just dove into the ocean on a hot summer day. I wanted to do it again.

And on a beautiful Matsukawa starry flounder from Japan, he placed a pinch of grapefruit and a single shred of opal basil. Somehow, its slight spice belonged — with the mild, firm fish, and the tart citrus, and the sweet ponzu — as if basil has been a sushi staple for centuries.

The unlikely herb was at home atop a New Zealand king salmon, too, which was almost as red as its sweet tomato confit and layered with a silky whipped tofu.

In a way that’s not tacky or tasteless but subtle and seamless — and respectful of his painstakingly sourced product — Tortosa manages to combine improbable flavors and textures to make each nigiri something more than just a piece of fish.

Every dish was a work of art, worthy of the ceramic vessel it was served in. Each piece is handmade in Richmond by Jered’s Pottery (aka the new Heath). Apart from the pinch-pot chopstick rests that looked like my kids could’ve made them, it was impressive to see how much effort went into matching tableware to ocean fare.

A smooth bone-colored bowl was ringed in the same soft yellow hue as the diced galia melon with magochi sashimi, its delicate flavor enlivened by thin slices of Serrano. I especially loved the smooth, palm-sized bath my ‘onsen Jidori egg’ came in. A single egg cooked sous vide to a pudding-like consistency when swirled, popping with trout roe and chives and floating alongside meaty strips of maitake in a rich, dashi-soy broth. We slurped the broth, somewhat awkwardly, with wooden spoons that were a little too deep, like shrunken versions of the ladles worshippers use to wash their hands before entering a Shinto shrine.

Really, the only let downs came toward the end of each night. Once, I opted to finish with an albacore and grilled onion hand roll. It wilted into something resembling a flattened tube of tuna toothpaste and became chewy to the point of almost choky. I tried to “eat it before the nori melts,” like our sushi therapist advised, but apparently I couldn’t eat that quickly.

So the next time, I went for a real dessert, the only dessert: soft serve. (I love soft serve. But enough already, San Francisco!) Even if it was made with sake lees from Bayview and scattered with pistachios and blueberries, it was bland. Plus, I’d rather drink my sake.

Oh, and then there was the bill. Also not a highlight, as it was high, especially for a mellow Monday night. But, like a first class ticket on a transpacific flight, if you’ve got the money . . . it’s most definitely worth the splurge.