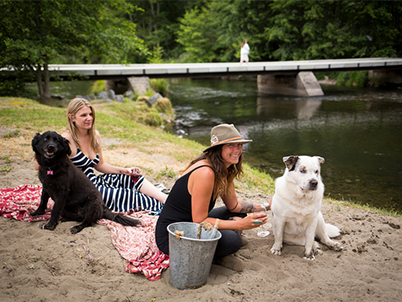 Only Hours From Napa, But A World Away

While Napa Valley and Sonoma are renowned for their world-class wines, tasting trips there generally come attached to luxurious digs, spa treatments, $25 tasting fees, Hummer limos and standstill traffic — and all the “no picnicking” pretension that goes with that.

It’s gotten to the point where a thirsty, fogged-in San Franciscan in search of summer sun, stellar wine and hotel rates less than $400 a night has to go out of state, especially when toting two children under the age of 5 and a husband who prefers his fishing rod to the French Laundry.

And so, we headed north to Oregon, not to the well-known Willamette Valley, in the state’s northwest, but about four hours to its south, a sprawling region better known for the “wild and scenic” (as the official designation has it) Rogue River and the Oregon Shakespeare Festival in Ashland than for the rolling vineyards in between.

We found a relaxed, blossoming wine country with empty roads and crowd-free tasting rooms — some surrounded by strip malls, others by sparkling rivers — pouring excellent versions of an impressively wide range of varietals.

“Oregon is not all pinot,” said Liz Wan, nodding to the persistent misunderstanding that Oregon wine means not just Willamette, but itsbest-known grape.

Ms. Wan is a walking Wikipedia of wine knowledge who serves as the de facto spokeswoman for a vast wine country without one. She is also a refreshingly rare sort of sommelier in an industry long dominated by buttoned-up white males: a perky Asian-American woman who wears flip- flops and greeted me with a “Hey, girl.” She splits her summers between making wine and overseeing the tasting room at Serra Vineyards and leading rustic inn-to-inn wine-tasting-rafting trips with Rogue Wilderness Adventures, which is how I met her.

“We have 150 microclimates south of Eugene,” she said, pouring me a Bordeaux blend. From Medford and Ashland to Grants Pass and Jacksonville, all the way north up Interstate 5 to Roseburg and teeny Elkton, the region features mountains, high desert and three river valleys, which in turn means a crazy range of climates. Southern Oregon doesn’t grow just one type of grape, but a whole bunch — and really well.

Varietals like chardonnay and cabernet franc thrive in the dry, hot Rogue Valley; pockets of the Umpqua Valley, which is spread across a fault line, excels in Spanish varietals like tempranillo; and throughout, you’ll find albariño, viognier, malbec, gewürztraminer, syrah and, yes, more pinot noir.

In the last few years, that diversity — as well as a laid-back scene and, winemakers say, an opportunity to put southern Oregon on the oenophile’s map — has attracted talent from the Loire and Napa Valleys, as well as prominent critics, who have begun handing out high scores and accolades.

It also means that this region has a branding challenge. “The best thing about southern Oregon wine is that you don’t just taste the same grape over and over again” is a refrain I heard from local winemakers, over and over again.

For visitors, though, an under-the-radar wine country without a recognizable “brand” can be a boon, offering more accessibility and affordability than you’re likely to find elsewhere.

WHICH IS ALSO TO SAY that not all of the region is pure eye-candy. A few miles north of Ashland, in the Rogue Valley, we turned right past a Chevy dealership and into Lithia Springs Resort, a remodeled clutch of clapboard cottages set in a manicured garden. We grabbed a map of tasting rooms and headed out. Driving through Medford, we saw more fast-food-chain outlets than pear orchards, which once reigned in the Rogue Valley. That is, until we came across a wildflower-lined hiking trail and, conveniently nearby, the sunny patio at Kriselle Cellar’s new tasting room, where we kicked things off with crisp sauvignon blanc and a cheese plate.

Ten years ago, there were 49 wineries in southern Oregon; today there are more than 150, according to Ms. Wan. And as the number of tasting rooms increases and word continues to spread about the quality of wine being made here, the swilling tourists are just beginning to arrive.

As we wound our way to the Applegate Valley, the Walmarts and Fred Meyers gave way to organic farms and estate vineyards. We pulled into Troon Vineyard, at age 42 the area’s oldest, updated with bocce and hammocks. “It’s snowballing,” said Herb Quady, a scruffy-bearded, second-generation winemaker who consults at Troon in addition to making his own wine. Mr. Quady is a California transplant, having moved here in 2003 after working at the Santa Cruz winery Bonny Doon. “In the last couple of years, southern Oregon wines have had a critical mass of recognition,” he said. “It’s, like, suddenly, we’re a region.”

Before his move, even Mr. Quady fell for the Oregon wine canard. “I used to think it was all lightweight Willamette pinots,” he admitted. “Then I did my research on the microclimates and the soil and the season length, and I was, like, wow. I could make some good wine here.”

Not just good, but really good, we realized as we continued cruising the valley. We visited ramshackle garagistas like Devitt; new rustic-chic Red Lily on the river; Schmidt, an old-timer with acres of blooming gardens; and Quady North, Mr. Quady’s tiny brick tasting room in downtown Jacksonville, a charming Old West town.

Something else struck us about these wineries: They were actually welcoming to children. Everywhere we went, there were crayons and coloring books and toy bins. Grassy lawns beckoned families to spread out a picnic blanket, enjoy a wood-fired pizza and stay awhile.

We found one such spot at new Dancin Vineyards, a mile outside Jacksonville, with a prime view of Mount McLoughlin. The affable, apron- clad owner, Dan Marca, and his wife, Cindy, moved here from Sacramento in 1999 (the vineyard’s moniker is a mash-up of their nicknames). Mr. Marca delivered Italian-sausage-stuffed mushrooms and blistered pizzas to our picnic table; our children, tired of coloring, played around a giant black walnut tree and sunny-yellow chicken coop, while we clinked glasses of the 2011 Septette pinot noir, toasting to a wine country that kids and parents can both love.

Tucked by the door was another bucket of toys (score!); we joined just two other tasters at the counter, both of whom, it turned out, were from Napa. One was a farmer who moved there recently with her new family to, as she put it, be “pioneers in a place where it’s still possible, and without $100 million.”

We made our way back down south along the Umpqua River, detouring off Route I-5 to sample spicy tempranillo at Abacela from Earl and Hilda Jones, pioneers of this Spanish varietal in America. Seth Berglund, who was behind the counter, poured us some of everything: viognier, malbec, syrah. He thought the branding dilemma was overblown.

“Everyone in the industry here is stressing: ‘We need an identity! What are we going to be known for?’ ” he said. “Why can’t southern Oregon just be ‘the Valley of Varietals’? I’ve been thinking about making a T-shirt.”

The next day, back in the Applegate, we sought out one last vineyard, Cowhorn. We tried four richly flavored Rhone-style wines and met the owner, Bill Steele, a former Wall Street equity analyst turned longhaired biodynamic winemaker. He, too, said that southern Oregon shouldn’t worry about its branding, but “just keep continuing to raise the bar.”

We grabbed a bottle of viognier, borrowed two glasses and found a hidden path that led to the Applegate River. With the sun beating down and the canyon rising above and not a soul in sight, we decided to strip down and dive in, a full-on family skinny dip. Try that in Napa.

Back in Ashland, we headed up a winding mountain road to Grizzly Peak and our home for our last night: Willow-Witt Ranch, a 440-acre off- the-grid farm run by a couple of 60-something women who promised to let the kids watch the 24 baby goats milk in the morning. The ranch was stripped of all conventional luxuries, lacking even a front desk. But we had a wheelbarrow to cart our stuff, a communal outdoor kitchen (and noncommunal outdoor shower), and a canvas tent complete with two comfy beds for $125 a night.

At dusk, we traipsed through the woods to the overflowing garden and honor freezer to collect our ingredients for dinner (including eggs and a Mason jar of goat milk for morning). By the light of our lantern, we made a fire in the wood stove, started chopping and lined up our loot on the table: a tempranillo from Abacela, Quady North’s syrah, a viognier from Cowhorn, Schmidt’s albariño. As the kids dozed off, we uncorked one, and then another.