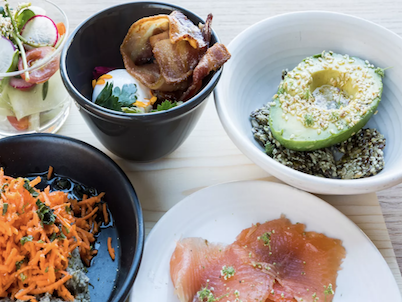 Old laundromats have been getting a new lease on urban life lately. And in San Francisco, not surprisingly, that means restaurant leases — from Tide Pods to table, so to speak.

I’ve lived in this city long enough that I used to do laundry where Nopa now serves burgers. But in the last year alone, the Doug’s Suds in Cole Valley has become a coffee shop called Wooden that is, yes, heavily wooded, with a resident wise-cracking parrot. In the Tenderloin, Barnzu serves Korean small plates where soiled pants were once cleaned. And in late May, on a quiet midday stretch of Market Street, the 52-year-old Little Hollywood Launderette became Kantine, San Francisco’s first Scandinavian half-day cafe.

Tucked between an HIV testing center and the once-iconic Orbit Room, the unassuming, window-walled space now serves smorrebrod and savory porridge from 7:30 a.m. until 3 p.m., when chef Nichole Accettola and her Danish-born husband and co-owner Joachim Majholm’s three kids get out of school.

Some neighbors were upset about the loss of their long-standing convenience. I don’t blame them. Doing laundry is a necessity — eating pork liver pate with pickled beets is not.

But on a recent Wednesday around 2 p.m., one white-haired, ruddy-cheeked couple was quite pleased. Wearing wool V-neck sweaters over white collars, creased slacks, and complementary caps, they clinked half-pints of lager and bellowed something cheery in Swedish.

In a town where the closest thing to a quick Scandinavian lunch has been the Swedish meatballs at Emeryville’s Ikea, clearly they were excited to have a place to come for pickled herring and lingcod fish cakes.

I order both, too, served as smorrebrod, or open-faced sandwiches. The lingcod fish cake is a cumulus cloud grounded by a single buttered slice of Danish sprouted rye. The fish itself is a bit bland, but offset by a chunky remoulade of pickled vegetables, capers, and tarragon, and the honeyed crunch of apple slaw, the sum total is lovely.

Until it’s in season here, Accettola gets her herring, whole, from Alaska. She fillets it, leaving the skin on one side; the other is brushed with Dijon and chopped dill. Then she dredges the fillets in rye flour before pan-frying and submerging in pickling brine. It’s served open-faced, on a small, buttered square of Danish sprouted rye bread. It’s dense and slightly sweet, dolled up with fuchsia curls of pickled onions and wisps of fresh dill. I can’t help but consider the smorrebrod a healthy, high-protein snack compared to the bulky loaves busting with fatty porchetta from Tartine Manufactory or pulled pork from 4504, the buttery biscuit-bacon-and-egg gut bombs from Devil’s Teeth or the oozy-cheesy Romanian pastrami-brisket from the Deli Board that have collectively come to define the sandwich in San Francisco; and let us not forget the the cocktail-drenched bacchanal that has become brunch.

Kantine offers an antidote: a civilized, Copenhagen-inspired counter to the gluttony. It’s an experiment in portion control, really, proving that a couple little bites of a lot of things can be just as, if not more, satisfying as many of one. Picture an airplane tray topped with the quality of food you’d expect from a fine dining-trained chef who worked around the clock with star chefs Barbara Lynch and Todd English in Boston, then fled to Copenhagen for 15 years — and brought a bit of Danish life back with her.

Here, a “board” is a literal slab of blonde wood configured with five ($15) or seven ($19) daily-changing items — chosen from a thoughtfully curated mix of a dozen or so — which you check off, like a form at the doctor’s office. It’s a choose-your-own Scandinavian-esque adventure, complete with three types of rye (sprouted, lacy cracker, or crispbread disc, which is more like the size of a vinyl record). Supremely silky local salmon, cured with salt and a touch of sugar, pink peppercorn and fennel, arrives thinly sliced — and unaccompanied by the obligatory big, fat bagel. Two tender strips of house-smoked bacon, spiced with juniper berry and coriander, come curled alone in a tiny bowl; there is no heaping side of hash browns in sight. A simple glass of diced cantaloupe, sprinkled with a sweetened mix of mint and tarragon, is in itself an “item” — and a worthy one at that.

Not all items are created equal, however. A couple cry for more salt or more seasoning or more something, like the three-lentil hummus. Hummus isn’t Scandinavian, of course, but as northern Europeans join the movement to eat less meat and more vegetables, it’s become a new staple. Sadly, the unfortunate-looking mound of lentil hummus lacked both flavor and visual appeal, making it the biggest disappointment of the bunch.

The bay shrimp, too, though pretty and pink, were as bland as I feared they might be. Scraping the bottom of the glass and stirring the dill and hard-boiled egg and house mayo together helped a little, but not enough to make me want to order it again.

Other dishes, though, literally brought me — in my Saucony sneakers — running back one morning: a yolky organic egg, floating in a bright-green pond of creamy spinach; a mildly curried egg salad with slivers of radish. A little glass lined with a creamy hay-smoked cheese topped with cherry tomatoes, cucumber slices, and sprouts was so simple and vitalizing I felt like the epitome of health just eating it. (Paging Gwyneth Paltrow. For better or worse, the GOOPieswould love this place.)

I do too. Everything at Kantine is on theme without being kitschy. Lattes come in Ikea glass mugs. Dido occasionally plays overhead. Table tags come with band names I’ve never heard of. (Biosphere? Efterklang?) I got Lars Ulrich almost every time. Maybe one day Metallica’s Marin-based drummer will come in and get himself?

Though, to be clear, cozy-hygge Kantine is not. Nor is it trying to be. “Kantine” is Danish for canteen: a place for hungry people to commune and consume. And so, it’s appropriately cavernous, at times chaotic, with a clean lines-cum-cafeteria aesthetic. Its holdover cement floors are heavily scuffed. Dirty mini dishes quickly pile up on your table. And on a crowded Sunday, the place heats up like a Finnish sauna. (How fitting.)

Still, Kantine gives the city something it has been missing, something that, as a free-roaming freelancer with a flexible lunch hour, I’ve been missing: a daytime cafe that feels as fresh and refreshing as the creamy-cold glass of thinned orange-muddled yogurt I ordered as a kick-off to all four of my meals. (I don’t think I’ve drank that much calcium since I was a kid.)

Perhaps most impressively, though, Accettola has managed to pull off something even rarer for a chef with her pedigree, in this competitive city: running what I predict will be a successful restaurant where she makes everything from scratch at a sustainable pace. Kantine operates at hours that work for her and her customers, with actually affordable prices — where a big, hearty bowl of purple barley and brown-rice porridge, brimming with kale, crimini mushrooms, and farmer cheese, stirred with sweet yolk and salty nubs of bacon, costs about as much as a single load of laundry.