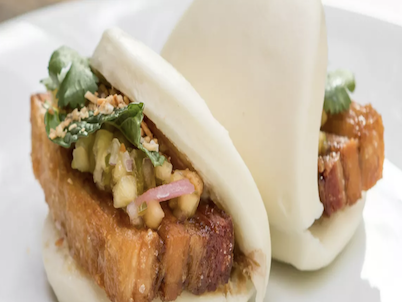 Everyone loves Ayesha Curry. She is warm and smart and real, with a tireless commitment to kids, her own as well as the 13 million children in America struggling with hunger, and a genuine adoration of her husband, the Golden State Warriors’ mouth-guard-dangling NBA star, Steph.

After joining her 5 million-strong Instagram followers and binge-watching her Food Network shows the other day, I became a fan, too. Of Ayesha the person. The businesswoman. The brand.

Just not of her restaurant: International Smoke, the sprawling, globally inspired, don’t-call-it-barbecue spot she opened with Michael Mina (his 33rd restaurant), street level at the slowly sinking Millennium Tower, in November, to much hype and booked-solid reservations.

Scanning the menu was like taking a quick culinary trip around the world: from wagyu shaking beef to jerk-rubbed duck wings to Argentine rib eye in a chimichurri to a Punjabi-spiced fish fry to a carne asada-stuffed baked potato alongside togarashi-spiked sticky rice. And that was my favorite thing about International Smoke (apart from the word “HUMAN” being stenciled on every bathroom door): its globetrotting, multicultural focus, its borders so blissfully wide-open I wouldn’t put it past Trump to swoop in at any minute and order them closed. I only wish International Smoke lived up to its promise.

Curry smartly conceived of a restaurant that mirrors her own Jamaican-Chinese-Polish-African-American background. Although she intended Smoke to be a mash-up of true international flavors, it played more like a muted, Epcot imitation fit more for an Anywhere USA mall than a sophisticated food city. Something along the way — from Ayesha’s home to the Mina Group LLC headquarters to the Millennium Tower — must have been lost in translation.

The place certainly had its pros: the frothy, coconut-milky, crushed-ice Horquito rum cocktail and the crisp fennel-radish-carrot crudite; the buttery-sweet curried cornbread and the garlic-chile hominy that should be bagged and offered to road-trippers as a substitute for corn nuts. The roasted, soy-caramel-glazed Brussels sprouts tasted like sticky-sweet bundles of joy. And the Thai shrimp tom khawas rich and spicy and better than any I’ve had from my go-to take-outs. Then again, if I’d been in the mood for red curry with shrimp, I would have stayed home and ordered it. This one, though, came flanked by an atypical garnish: more of that cornbread.

Otherwise, upon reading the menu, I wanted absolutely everything! Upon eating it… we were underwhelmed by almost everything. The Kalua “Instant Bacon” with Hawaiian teriyaki, cilantro, and pineapple salsa on a steamed bun was all bun, barely any bacon. I love a soft pillow, but its folded doughy-white puffs were so smothering they muffled any flavor. The green papaya slaw lacked so much, including kick, I thought perhaps the kitchen had accidentally shredded the fruit and then forgot about it. The smoked burrata came with a big show (a glass dish lifted in a magic puff of smoke) and a befuddling cold mush of shaved Brussels, spiced squash, apples, and pecans. The black garlic and miso cod was as salty as the sea, and the Vietnamese barbecue pork chop was striped with aesthetically pleasing charred marks, but tasted more like a quick flame-broil job than barbecue through and through.

Smoked pork — in various forms — was the supposed centerpiece of the lengthy menu, yet I’d take the simple charcoal-grilled, lime-tinged Maine lobster tail (for a ridiculous $58) over them all. The Korean scallion crepes were flaccid and forgettable; the sliders ranked low among all the sliders I’ve enjoyed in my life. Only the crunch of the tostadas topped with smoky-hot New Mexican adovada-style pork shoulder sated. And the smoked ribs, trimmed to an easy-to-eat St. Louis style, came coated in a too-mild Korean gochujang, spicy New Mexican adovada, or sweet, sticky American barbecue. Touched with caramelized sugar then blow-torched, the American barbecues were the best. The meat fell off the bone, but without more bark, more finger-sucking, soul-stirring depth, the ribs failed to make me fall in love.

I wanted to at least like our servers. As people they were fine, but as humans working in the hospitality industry, they lacked an understanding of their jobs. Instead of offering eye contact, a semblance of personality, and an ability to offer much more than poorly memorized descriptions of the $30, $40, $50 entrees, they seemed sort of miserable, mechanical, hoping to just get through their night rather than help us enjoy ours.

We had a minor issue not worth getting into here, but I’m glad it happened, as it brought over the manager, who was effusive and sincere and expertly handled it. I felt better knowing there was someone working the floor Ayesha would be pleased to know was taking good care of her customers, if she can’t.

Customers who are loyal Curry Family fans, packing the restaurant like it was Warriors stadium, and comprising a crowd equally, and refreshingly, as diverse. Customers who come from around the Bay, if not the country, to support Ayesha and Steph, to soak in their aura, and bask in their glory while shooting Buffalo Trace bourbon picklebacks chased by turmeric-curry-infused pickle juice.

Customers like the couple clad in NBA Finals hoodies we met at the bar. They’d trekked in from Vallejo for happy hour— and left unimpressed, but not unhappy. It’d be hard to be with $3 ponies of Miller High Life and $3.50 apiece ribs and barbecue red-chile-basted oysters. Still, “everything was so salty, I feel all swollen up!” laughed the middle-aged man, puffing out his cheeks. (I couldn’t argue.)

“I guess it was a little more gourmet than ballpark food,” added his wife. “I wouldn’t make a special trip again, but I’m glad we tried it.”

That’s the thing about a celebrity-owned restaurant like International Smoke. It has the easy advantage of getting people in the door, but then the food has to be good enough to bring them back. True sports fans will stand by their team through the ups and the downs. True Ayesha fans may, too. When it comes to restaurants, though — in San Francisco especially — food fans aren’t so forgiving.