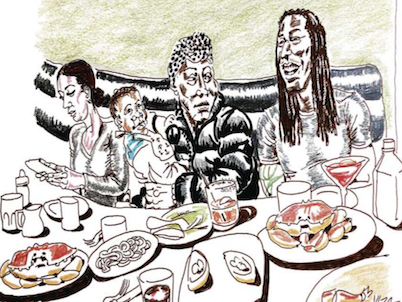 The Usual: For generations, Thanh Long has been the go-to for crab

In the summer of 1985, Annette Jackson and her high school boyfriend drove into the city in his drop-top Mercury Cougar toward Ocean Beach. Not to the beach— only once has she gone to the beach— but a few blocks east of it, to Thanh Long.

All senior year, her boyfriend kept telling her: “I’m going to save all my money and take you to a special dinner for graduation.” Graduation Day came and went, but he wasn’t quite yet flush enough. So, he gave her flowers instead and saved a little more.

“I’d never heard of no restaurant Thanh Long!” she says. “Thanh Long? I thought he was making it up!” The two dated all four years at Oakland High. They’d go to Mexicali Rose. “Sizzlers was always popping,” says Annette.

That first supper was special. “All of East Oakland was there!” she recalls. It turned out, everyone knew what 18-year-old Annette had just discovered: Somehow, Sunday nights at Thanh Long were a tradition. . And there was no better place in the Bay Area for Dungeness crab. Garlicky, peppery, buttery sweet roasted crab.

Now 53, Annette’s relationship with the restaurant has long outlasted the boyfriend. “Oh, I dropped him my first year of college!” she says. “But I kept the crab.”

Most Sundays, she and her girlfriends would make the pilgrimage from Merritt College for their favorite meal—and the crowds of cute, single guys who came craving it, too. Real gentlemen, she recalls. They’d buy Annette her friends drinks. Gift them garlic noodles. “Someone would usually pass us a platter of crab, and say, ‘Here you go, ladies!” She laughs. “I guess that’s why we went on Sundays.”

As life moved on, she’d go with her favorite cousin, with guys she dated, every birthday. And after watching him grab the crab in her New Years’ Eve gumbo and crack it with his bare little hands, she brought her son for his fourth birthday, too.

“He went beserk!” recalls Annette. “He got on his hands and knees at the table, all dressed up in his little plastic bib, and went to town like he’d been doing it for years,” The butter was running down his face, he was licking his arms.” She and his dad, Lenny Jones Jr., were cracking up. “We were like, ‘Did he really just eat an entire crab by himself?’” (He did.)

Lenny Jones III, now 28, has spent every birthday dinner since, like his mother—devouring Dungeness.

He has had hundreds of other dinners there, too: “look how much I’m spending dinners” with his high school sweetheart, Mariah; prom night dinners; boys’ night dinners; home-from-college dinners. One lone “I’m a vegan now” dinner. (Until, Lenny left hungry.)

Since then, he’s had countless any-old-time “I’m feeling crab” dinners. Even if it takes two hours, from Dublin, during Friday rush hour traffic to get there.

And only there. Thanh Long has been drawing crowds to Judah and 46th Avenue long before the stretch became a media darling as a magnet for bearded surfers and clog-clad women seeking espresso and toast and ceramics and succulents. Which is to say: predominantly white. People will wait hours for dinner at Outerlands and people will wait hours for dinner at Thanh Long— but these are noticeably not the same people. Neither Lenny nor his mom have ever been, nor really noticed, anywhere else on the block but Thanh Long.  “I only eat at Thanh Long when I come to the city,” says Annette.

The longtime host, Lani, lets them slide in sans reservations. Lenny fist-bumps the same server he’s fist-bumped since he was a kid.

At 6’3”, 256 pounds, his knees, when sitting, are now taller than the table. He forgoes the bib, unlike everyone else in the two-story, 150-seatrestaurant. He drinks Don Julio 1942 Tequila neat, with a side of pineapple juice. His mom lets him wear sweatpants. And he never lets her pay the bill. Which, of course, isn’t cheap.

On this night, they get two, roasted with founder Helene An’s “garlic sauce and secret spices. Plus, those garlic noodles—no one doesn’t get the garlic noodles—and an order of chicken fried rice, with an extra side of melted butter, which Annette pours over the bowl of rice.

They add the shaken beef, cubes of New York steak flambeed in Chardonnay. When it arrives, Lenny shakes his head at the piddling plate — and politely sends it back. “Can you put a few more greens on there?” he politely requests. As in: Where’s the beef? Lenny turns to his mom. “That’s a sign of disrespect, right there!” he says. Their Thanh Long is better than that.

Their Thanh Long is also a blissfully messy one. Not unlike, they admit, their life: a mix of ups and downs and obvious mother-son love. Lenny’s father  left long ago for prison and has since passed away. Annette’s sister served time, too. Getting a full ride to the University of Reno for football and signing with the Forty-Niners were definite highs.. The two concussions that followed, and his current free agentsituation, a bit of a low. “You are not going to Canada!” declares Annette. Maybe he’ll become a firefighter? “You are not going to be a firefighter!” she says, finishing off her glistening rice.

Lenny didn’t even start playing football until senior year. He recalls the coach saying: ‘Are you really going to let those big ol’ hands go to waste?’”

Clearly, no matter what happens, he hasn’t.

The crab crunches beneath his massive claws. No mini-forks for this table. “We’re finger people,” explains Annette, wresting a piece of fleshy meat from a leg and dragging it through the bottom of the accompanying bowl. “It’s about the butter and the pepper,” she instructs.

It’s also apparently about the shell. Lenny palms the featherlight, fire-red carapace, and sucks. “I saw an Asian man do that once,” he says.

Other than the prices, the only thing that’s really changed over the years, says Annette, is her drink. (A Hennessey margarita these days.) Also, she’s a grandma now.

In his four months, Lenny IV, has already been to Thanh Long three times. No crab for him— yet. Mariah brings avocado mash instead. She doesn’t do crab either. (Only that so-so shaken beef.) “But I’ll still come,” she says, rolling her eyes beneath lashes as long as her nails.

Everyone still comes. Annette and her Lennys — andlimos of lively ladies from Oakland; and decked-out couples from Concord; and graying trios from Vallejo who religiously rotate the tab; and chatty besties from Antioch who refuse to share. Even, yes, Danny Glover, as Thanh Long’s website proudly touts.

“They’re not lying,’ says the local celebrity, laughing over the phone. “I’m going to go with my niece tonight!” He’s been a regular since it first opened in the early 1970s.. It was his family’s first introduction to Vietnamese food, as it was for most Californians. Last year, Helene An was honored by the Smithsonian for introducing Vietnamese cuisine to mainstream America.

The crowd was mostly African American  then too, Glover tells me. People from the Western Addition, the Fillmore, before they were pushed out of the city, he says. “You get something that catches on in a community— especially the Bay Area’s relatively small African American community— and that’s it, word spreads. Also, it’s crab! You know what I’m saying?”

They come for the crab, they say. The best in the Bay Area. But after four decades, is it really the crab alone?

“People are always like, ‘Girl, do you have stock in that place?” one regular put it while waiting for the valet. We laughed.

Maybe not in the financial sense. But stock as far as faith and trust and roots.

It’s a rare thing anywhere, even in the food-obsessed Bay Area, for anyone to consistently commute across cities and bridges for a meal. But it’s an especially rare, wonderful, thing for generations of black people to trek to some foggy block otherwise swarmed with white people in Patagonia puffies fawning over fresh pain au levain, to a far-flung restaurant founded almost 50 years ago by a family of Vietnamese immigrants— and call it home.