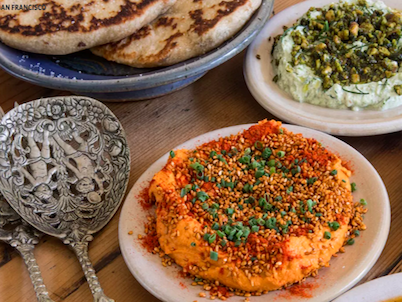 Dinner at Duna involves very few decisions, and for this we should be grateful. We’ve got enough to think about as we scroll endlessly, depressingly, through our Trump-strewn newsfeeds all day. Come dinnertime, it’s comforting to walk into a restaurant that’s homey and hearty and Hungarian — with a menu about as brief as a tweet.

It’s a little less comforting to have to stand in line and order at the counter while listening to people ask questions like “How’s the riesling?” and “How many dips should we order?” (My answer, after trying all five: all five.) Then survey the room for an open table. Then carry over your own glasses and carafe. And then have everything you ordered — especially when you ordered just about everything — come in rapid succession, like a blitzkrieg, mere seconds after your wine arrives.

If not before, as our chilled yogurt soup did one night. A peeve. Even the training manual at Pizzeria Uno, where I once worked, dictated that drinks be delivered within four minutes of a customer’s order.

It wasn’t like my soup was going to get cold or anything. So I ignored my pretty antique floral-patterned bowl of garlicky, house-made yogurt mixed with cultured kefir cream and brimming with bits of cool, garden-fresh cucumber, crumbled pecans, and a whole lot of dill, while I waited, for quite some time, for my glass of orange-hued rebula. (Both were ultimately delicious.)

Maybe delayed wine and DIY water are just what it takes to get a decently priced dinner in this town these days.

Due to the astronomical costs of running a restaurant in San Francisco, “fast-casual” spots keep proliferating — eateries with solid food and suitable ambiences that forgo welcoming hosts and doting servers and busting-their-asses bussers in favor of affordability. It’s a format that’s proving successful for the Little Gems and RT Rotisseries of the city, where people know what to expect.

But Duna — which debuted in June in the former Herbivore space, following chef-owners Nick Balla and Cortney Burns’s fleeting pop-up, Motze — is a bit of a different beast. It bills itself as “fine-casual.”

And fine it is. If fine means food that’s soulful, creative, and cooked with care, using local, organic — or as they put it, “noble” — ingredients. Accompanied by candlelight.

After three visits, I’m not convinced this kind of quickie, truncated experience works for Duna. Perhaps it works for the owners — and that certainly counts for something — but from the customer perspective it’s uneven, almost awkward (especially when you go to punch a tip on the iPad at evening’s end. Philosophical question: Is 20 percent still fair?).

Don’t get me wrong. Everyone was quite nice, including the woman calmly and knowledgeably taking orders. She’d spent the last three years in Budapest, eating stuffed cabbage and chicken paprikas. “Don’t tell my friends…” she whispered, as if her friends might hear her. “Duna is better.”

But nice only goes so far when you want, say, another slab of doughy, warm smoked potato flatbread, and are told, as we were on our first visit: “Sorry, you’ll have to get back in line.” (They’ve since rectified the issue by providing a phone number for already-seated diners to “text for re-orders.”)

And you will want more flatbread. We got seconds every time, as the dips — creamy, vibrant — routinely outlasted it. Standouts include roasted pumpkin seed doused with hot green chile and grapeseed oil; sweet preserved eggplant scattered with preserved kumquats and sprigs of mint; a spicy Liptauer paprika cheese thick with onion, garlic, and toasted sesame seeds that was reminiscent, in the very best way, of Trader Joe’s jalapeno pub cheese. When the last tear of bread was gone, rather than bother ordering another, we scraped the rest with our spoons.

The chopped salads — served family style, like every dish at Duna — are supposed to be eaten with spoons, too. I used my fork for the Sofia, which was essentially just a Greek salad named after the capital of Bulgaria. Nothing special, nothing more. But the Budapest was a bowl of beauty. A brightly colored jumble of bold flavors: juicy red tomatoes (cherry, Early Girl, andheirlooms), fiery electric-green padrons, and soft cubes of Point Reyes’s toma tossed with slices of smoky sausage, rings of piquant peppers, button mushrooms, and finished with plenty of paprika. The dressing — the vegetables’ natural juices soaked in red vinegar with garlic and marjoram — was simple and soupy and indeed worth slurping.

Balla and Burns have tried, yet again, to transform the formerly dull Herbivore space into something warm and woodsy, with bark and branches, woolly art and leafy plants. Intended to resemble the banks of the Danube River — for which Duna was named, perhaps? — it works well enough, but that drab gray institutional tiled floor will remain a thorn in Duna’s decor until they decide to do a real redesign.

Admittedly, no one but the critic seemed to care. Everyone in the long, narrow room clustered around votive-topped tables, as cozy and content as if they were in their own dining rooms (which is possible, as Duna does deliver).

If I squinted past the startup logo-emblazoned hoodies and the latest $300 clogs, it was almost as if 21st-century Valencia Street had time-traveled to 19th-century Budapest. But no, it was just the San Francisco elite digging into Duna’s “peasant” food.

A duo of cabbage rolls stuffed with chicken and pork snuggling beside slippery house-made sauerkraut, slices of smoked sausage and pork belly, meaty roasted mushrooms, and dried apples was at once delicate and hardy. The chicken paprikas, in a thick, pungent gravy poured over eggy, soft spatzle was just as satisfying. Only the lentil croquettes were a disappointment. A beloved holdover from Balla and Burns’s Bar Tartine days, but made over at Duna, they were dense and dry. Luckily they were surrounded by a gorgeous assembly of roasted spinach, turmeric-tinged cauliflower, and chile-infused yogurt — all of which we devoured.

Our empty dishes cluttered our table throughout the entire meal — until eventually I had to text someone to take them away.

But we abandoned our croquettes. Like the staff did our otherwise empty dishes, which cluttered our table throughout the entire meal — until eventually I had to text someone to take them away.

“Sunday suppers” at Duna are ticketed, intended to be a more civilized, supposedly slower affair, with cultural themes like “Road Trip to Southern Bulgaria” and “Paprika and Onion.” We’d reserved two seats on the “Boat Trip to Belgrade” (which must have been a speedboat, because somehow our $170 meal was over within 52 minutes). We relished our lively yogurt soup; mild lamb tartare peppered with raisins and parsley; and spicy, rich rock-cod stew nonetheless.

But nothing was as good as Duna’s dips. Especially not dessert: a tasteless frozen custard coated in a parched black-sesame crumble that left me wishing for its doppelganger — Carvel’s crunchies — instead. The “peanut-butter and jelly truffle balls” were the kind of finale only a diehard gluten-free diner could love.