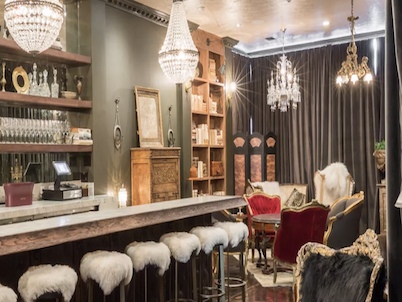 I’m not sure the man in a velvet maroon blazer who greeted us at the front door of Bar Crenn was French, but it doesn’t matter — he had me at “Bonjour.”Somewhere else, his affectation might’ve come off as forced or kitschy — like, “Hello, Americans: Welcome to a French restaurant.”

Not here. This opulent, dimly lit den is star chef Dominque Crenn’s, the Marina’s splashiest new spot since her first born, Atelier Crenn, opened next door in 2011. Crenn is one of America’s only multi-Michelin-starred female chef (Chef Suzette Gresham also maintains two at Acquerello). Nothing she does is kitschy: not the white, faux-fur-draped chaise or the chandeliers dripping crystal or the leopard-print thrones or the intentionally distressed books lining the shelves or the ginormous painting of a Coco Chanel lookalike presiding over our plates. It all could have felt gaudy or overwrought, but with Crenn’s touch, the sum total was tasteful, impeccably done. Bar Crenn is the most romantic place to sit and sip a pamplemousse negroni — and slurp Guy Savoy’s ice-poached oyster in its own gelee — in all of San Francisco.

And the most expensive: Bar Crenn was billed as a wine bar, but that’s a bit of a misnomer. If you want a table, you’ve got to buy a ticket through Tock: That’ll be $165 per person for the caviar tasting, $85 per person for the three-course “carte blanche” menu, or $50 per person for wine with “small bites.” If I’m going to spend at least $200 for two, I’m going to call it dinner. The only way to make this place affordable is to pop by for a glass (standing room only) or forgo all booze and order nothing but the brioche. Which, being a buttery, golden masterpiece of a mini loaf, would still be worth it.

As Crenn told Eater earlier, Bar Crenn’s design is intended to make us feel like we’re hanging out in her living room. (Her house must be pretty nice.) It’s not unlike George Chen’s aim for his elegant, “private chateau” Eight Tables or the couch-strewn vibe at SF Jazz’s newish B-Side lounge.

I’m down with living room-like dining. I don’t mind sinking into a cushy armchair or hunching over a coffee table. But to be fair, I usually do it while eating delivery pizza in front of Netflix, not cutting into a dainty pancetta-studded tarte flambee donated by Alain Ducasse. (Jews are supposed to recline on Passover, so why not on a Saturday night at a 1930s-style Parisian salon, too?)

Glancing around Bar Crenn’s long, narrow room, though, it was clear not everyone felt so comfortable. There was the trio squeezed side by side on a loveseat, facing out rather than toward each other, TV sitcom-style. The silver-haired foursome (men in sports jackets, ladies in pearls) shifting in their deep, velvet cushions, trying their best to make out the menu’s 10-point font in the dark. (“It sets a mood,” said our server. “But…”)

The flirty, well-heeled couples sitting knee to knee at the marble-topped bar were content. As were my sister and I, sliding into our mismatched settees, feeling chicer than we actually are — until we also felt something I hate feeling in a restaurant: cold. Seated beneath a ceiling vent blasting frigid air, it was like Siberia suddenly invaded France. We couldn’t switch because every one of the 26 seats was reserved or occupied; requests to make it warmer resulted in a warm stuffiness that we all agreed was worse. So, soigne Siberia it was. I thought about wrapping myself in the white faux-fur throw draped behind me, but realized that would’ve probably been frowned upon.

After all, Bar Crenn is civilized and sophisticated, a welcome detour off otherwise fratty, fleece-clad Chestnut Street. The kind of place where a hollowed eggshell arrives brimming with bone-marrow custard, smoky creme fraiche, a squeeze of Meyer lemon, and an abundance of sturgeon caviar on a silver pedestal; and Dungeness crab comes delicately sandwiched between slabs of creamy avocado, dotted with Marcona almonds and purple nasturtium.

Meanwhile, one pink scallop, recently pulled from the Puget Sound, curls up inside a seashell with horseradish-spiked creme fraiche, a few pearls of caviar, and a $20 price tag. And finally, an eggy salmon souffle baked with a layer of black cod and accompanied by a sweet tomato compote arrives so fluffy and fleshy and flavorful — yet it’s finis after four or five forkfuls and left us craving more.

Which is to say, at Bar Crenn, the portions are small, the prices are high, and midway through the carte blanche tasting, you start to worry that despite blowing big bucks, you might leave on a still-empty stomach.

Hence, my sister: “Another round of scallops!” she said to our server with gusto, without realizing that’d mean another $40 on our tab. We opted for seconds of the $5 oysters instead.

We also opted for the wine pairing. It was lovely — particularly the rare Loire Valley Sancerre — but it, too, wasn’t enough. Call me a wino, but for $65 I wanted more than the allotted three half-glasses spread across our almost three-hour supper. Or maybe it was just that the pacing was off; the Sancerre was poured long before our salmon souffle arrived. I took my first bite with my last sip. It would’ve been nice if our server had noticed and offered a splash more. At these prices, in this heady atmosphere, it would have been appropriate.

But Dominique Crenn doesn’t need to give anything away. In some circles, she has become as much a legend as the living French chefs to whom she pays homage. For a taste of her artistry — whether at Bar Crenn, adjacent Atelier Crenn, or Petit Crenn on Hayes Street — people happily pay. Even swoon in her presence. “Everyone forgets how to eat when she comes in,” our server said. And she’s in often. “I’ve been working for her for years, and she still has the same effect on me.”

Personally, watching Crenn, rock star that she is, chitchatting at the bar, I didn’t forget how to eat — I just wished I could keep eating.

My earlier fear about not getting enough food? Confirmed — even after we enjoyed every last morsel. (Everything except for the quenelle Lyonnaise, that is. Its twin mounds of fish mousseline were squishy and airy and doused in a too-fishy crayfish sauce. It all tasted like a failed French attempt at Gefilte fish.) Even after spreading more whipped beef fat onto my brioche than any respectable human being should. Even after devouring the most divine Madeleine of my life — bronzed and buttery, made with almond flour, filled with lemon curd, bursting with Sicilian pistachios, and served less than 60 seconds after leaving the oven — I was out hundreds of dollars and still hungry. No matter how enchanting an evening, that’s never a good feeling. Or maybe it’s just the American in me.