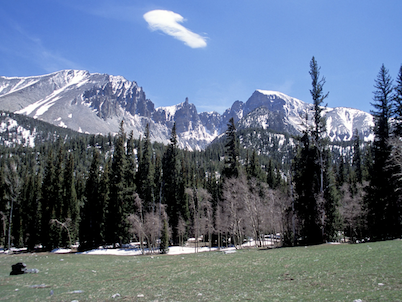 A 77,000-acre National Park Off the Tourist Path

Somewhere on the long, lonely, blissfully open road between Salt Lake City, and Baker, Nev. — a tiny town that is the entry point for Great Basin National Park — I texted the one friend I have who had been there.

Lisa’s mother hailed from the small town of Delta, 100 miles east, where we stopped for a quick shop. It was the last chance for our San Francisco family to buy lunchtime essentials like organic crunchy peanut butter and tangerine-flavored La Croix.

“It’s so quiet and peaceful,” Lisa texted wistfully of Great Basin, one of America’s least-visited national parks. “Also, you will probably run over some rabbits on the way. This is normal in these parts. Don’t freak out.”

We didn’t hit a rabbit, but we almost hit a sheep. A fluffy, cute, seemingly lost black sheep. It leapt onto Route 50 and right in front of our rental car. My husband honked and the poor thing scurried away, but I couldn’t help but consider it a fitting start to our long weekend.

Here on the Utah-Nevada border, Great Basin could be called the black sheep of the region’s national park family. Bryce, Zion, Arches, Canyonlands, even Capitol Reef, get all the attention — and annual visitors (Zion got a record 4.5 million visitors in 2017, to Great Basin’s 168,000, also a record). But, I soon realized, Great Basin gets something arguably better: anonymity.

“I’d never even heard of it,” said Megan Neemann of Salt Lake City, who I met in Baker and then again, amazingly, on the trail — even though, at some 77,000 acres, Great Basin has more than 60 miles of them. She was on a babymoon with her husband, Erik. Great Basin was his idea for a last-minute Memorial Weekend; it wasn’t exactly Plan B — more like Plan F. “I tried everywhere — Zion, Bryce, Arches — they were all crazy,” he said. “But I was able to get a room here just two weeks ago!”

And Baker — population 68, as of the last census — doesn’t have very many rooms.

Or very much of anything at all. There’s one store selling marshmallows, Lunchables and mousetraps. An espresso cart, the Baker’s Bean, is tucked away on a grassy corner (“If anyone else tried to offer lattes around here, it’d be a hot button-issue,” said Cheri Phillips, the barista and an owner.) And two restaurants: one that appeared to be closed but apparently wasn’t, and Kerouac’s, which was really good (something restaurants in or near national parks almost never are).

A sophisticated pizza and burger place, Kerouac’s was opened last year by Kate Claeys and Jake Cerese, ex-New Yorkers who moved to Baker on a whim. They designed and renovated the circa-1905 miners’ saloon, aided by artisans who worked with ponderosa pine, spruce and steel. Kerouac’s has all the urban accouterments, including seasonal, local ingredients and a fully stocked bar. We ate six meals there in three days.

And not just because it was across the road. Our home base was the Stargazer Inn, also owned and upgraded by Ms. Claeys and Mr. Cerese. For $98 a night, we had wood paneling, carpet, a mini-fridge and toaster and, most important, a shower. It was five minutes from the park and felt kind of like camping, which we had considered, but with a flight and two little kids in the mix, reconsidered.

Last summer, we took a family trip to Yosemite, and it was a zoo. We’d arrived at our cruise ship-size resort armed with a vivid mental list of Yosemite’s iconic sites — El Cap, Yosemite Falls, Half Dome — then spent the trip surrounded by fellow tourists likewise checking them off. We left feeling Californian and patriotic and like good parents. We’d shown our children the American West, in all its glory.

In Great Basin, though, we were like slacker parents: totally winging it. We pulled in Friday evening with no plan, no must-sees, no mental picture of the place whatsoever. It’s a rarity when traveling anywhere these days. And it felt freeing.

It was also free. As in, no entrance fee. No welcome gate. No traffic backup. Just a simple green-and-white roadside sign that read Great Basin National Park, which we cruised right past. We soon saw a smaller sign, for Baker Creek, and hung a left down a dusty dirt road. Creek sounded nice and my husband, Josh, had his fishing rod.

Remoteness aside, I realized that a big reason so few people come to Great Basin is because without an image of it etched in their minds, no one thinks to. People have no preconception of this national park, in part because it hasn’t been one for very long. Declared a national monument in 1922, it was only anointed national park status in 1986. (No wonder it held no childhood lore for me.) Yellowstone has Old Faithful. Banff has electric-turquoise Lake Louise. The Grand Canyon has, well, the Grand Canyon.And Great Basin, the vast, mountainous “cold desert” between the Sierra Nevada and the Wasatch Range, has … the Lehman Caves? It doesn’t have quite the same ring.

We set out on the Timber Creek-Baker Creek Loop trail, a 5.1-mile trek that starts at 8,000 feet and climbs another 1,600 or so — perhaps an error in judgment given that we were toting two kids under 10. They got their first blisters, kicked off their hiking boots and walked the rest of the way barefoot. (That’s not advisable in rattlesnake country — and I say this as the author of a book on the subject — but I’m also a slacker parent who just wanted to get back before dark.)

Once the whining subsided, we experienced true tranquillity. We picnicked creek-side in a meadow below snowcapped 11,926-foot Pyramid Peak. Josh cast futilely for native Bonneville cutthroat and I fell asleep to the sound of warblers — eventually awakened not by my children, but by a wild turkey. We wandered over boardwalks and mossy rocks, past bright-yellow balsamroot and through aspens shimmering green, their bark whittled with names dating back decades. It was rare proof that other hikers have, in fact, been here. We did not see a soul.

Come dinnertime, though, everyone is at Kerouac’s. Ms. Claeys welcomed us back and regaled us with tales of an enormous but innocuous snake she had discovered outside Room 5 earlier that day in mid-digestion of a bird.We say hello to the Neemanns, who had another great day: Erik climbed 13,063-foot Wheeler Peak; Megan, being pregnant, hung back.

My 6-year-old son, Oren, made fast friends with 30-year-old Sam Schneidman, who was “on his way” (sort of) to a wedding in Washington, D.C. He was initially bummed that he didn’t make it to Capitol ReefNational Park in south-central Utah as planned, but his geologist buddy from Reno had heard of Great Basin and dragged him here instead. Mr. Schneidman was glad he did, as were we. “This place just feels so unexpected, almost forbidden,” he said.

Ben Wong, a van-lifer from Brooklyn, rolled into the park in his Mercedes-Benz Sprinter after rock climbing with his fiancée a few hours away. They’d been living like nomads in their van for the last nine months. “We just looked at the map and said, ‘Hey, there’s some national park nearby, let’s go check it out!’” He glanced around. “We’re the only Asian people here,” he added, laughing.

It appeared to be true. Travelers from Asia, in fact, may be the fastest-growing segment of visitors to U.S. National Parks, increasing by 13 percent in 2016 from the previous year, and accounting for one in six of foreign visitors in 2016, according to a report from Visa. But Great Basin isn’t on the international tourist circuit.

Unlike in the big-name national parks, almost everyone we met was from Utah or Nevada; as Californians, we felt almost exotic. Our neighbor at the Stargazer, Monty Ashton, grew up nearby in Ely, Nev. His family came to scatter his uncle’s ashes up by Baker Lake. He and his 84-year-old mother, Shirley Ashton, have been coming to Great Basin long before it became a national park. And they were happy it did. To Ms. Ashton, a National Park Service designation means crowds and cafeterias. They haven’t showed up yet. “It just means people can’t ruin it now,” she said.

Lehman Caves, a limestone and marble underworld, though, is the park’s main attraction, and popular enough that the hourlong, 20-person tours often book up a month or so ahead. Still, we showed up at the Lehman Visitor Center the next morning around 8 and had our pick of time slots. Dripping with stalactites and bats and a rich history that includes Prohibition parties, the cave is pretty cool (literally and figuratively).

But a cave alone won’t woo me 600 miles from home. Stars, on the other hand, would. One of the least populated areas in the lower 48 — at 10,000 feet no less — Great Basin became an official International Dark Sky Parkin 2016. This is a collection of some 100 destinations — from Warrumbungle National Park in Australia to Hortobagy National Park in Hungary — recognized by the leading anti-light pollution organization for their nocturnal environment and exceptionally starry nights. It’s a designation of rising importance in our country, which is increasingly aglow.

“Half the park is after dark,” as one ranger put it. Unfortunately, the weekend we were there, the night sky was a mix of clouds and bright moonlight. We certainly saw a super-clear Big Dipper, but not the Milky Way or the meteors or the supposedly mind-blowing intergalactic show of stars darting across the sprawling sky. We did, though, get to ogle Jupiter and its red racing stripes through the high-tech telescopes that astronomer-rangers set up outside Lehman Visitor Center on Saturday nights.

Ultimately, though, it wasn’t what was overhead or underground that made Great Basin worth the journey.

It wasn’t Wheeler, the tallest peak in the park, as looming and humbling as it was. Or the big, fat marmot we saw squatting on the side of the road, looking at us like a hopeful hitchhiker.

It wasn’t even the 4,000- to 5,000-year-old bristlecone pines — a stark, surreal grove of gnarled, ancient wonders that have withstood all that this cold, harsh world has thrown at them.

What made the trip to Great Basin worth it was the affirmation that an empty national park is better than an epic one — in part, at least, because you feel less like a lemming and a more like a pioneer. (Of course, the Native Americans who lived here thousands of years ago were the real pioneers.) Plus, there’s something bonding about going where so few fanny pack-clad tourists have gone before; a camaraderie that comes from being in an isolated place together.

On our last day, amid stalemates and whines of “I’m tired,” we slipped and slid over late spring’s snowfields. The hike was three rigorous, arguably treacherous miles, at 11,000 feet, under the threat of thunderstorms. Good parents would turn back, I thought. But soon, the first bristlecones came into sight. Weathered, wise and weary, but still standing. “I want to touch the oldest living things on the planet!” said my 9-year-old daughter, Hazel. She broke into a sprint, her little brother trudging behind, slowly but surely. Blisters be damned.

Rachel Levin is the San Francisco restaurant critic for Eater and the author of “Look Big: And Other Tips for Surviving Animal Encounters of All Kinds” (Ten Speed Press).