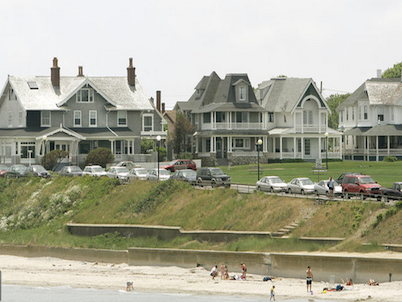 Uber and the Islanders

The “Help Wanted” sections in Martha’s Vineyard’s two local newspapers still read the same as they did 20 years ago, when I was looking for a summer job: server at the Seafood Shanty, carpenter’s assistant, rural mail carrier. Except for one, an ad with a glamorous-looking woman emerging from a shiny black car. “Drive with Uber,” it said. “Get paid weekly just for helping our community of riders get rides around Martha’s Vineyard.”

Uber, the ride-hailing app, began business on Martha’s Vineyard — as well as on Nantucket and Cape Cod — over Memorial Day Weekend, triggering mixed feelings among islanders and, of course, a barrage of resistance from the family-run taxi companies that have long dominated the island. “It will be the slow death of us,” Jim Hickey, a co-owner of Bluefish Taxi, told the Vineyard Gazette, in one of dozens of local articles and competing op-eds (with headlines from “Hashtag, Stay Local” to “Fan of Uber”) that have run since spring.

While many locals praise such technological advances coming to their community, some longtime visitors are unhappy about Uber infiltrating a place they would prefer remain timeless. “I don’t like it,” said Matt Fortenbaugh, 40, an Internet ad sales manager from Boston who spent summers growing up at his family’s home in East Chop, on the northern end of the island.

“McDonald’s, Uber, stay away,” he said. “You come out here for an escape. If you have all the conveniences you have at home, why bother with the hassle of taking a ferry? It used to be a badge of honor not to have a cellphone here. You’d say, ‘Leave me a message at the house.’ Uber is just another thing mainstreaming the island.”

While it is now available in 58 countries and more than 300 cities, operating in quaint seasonal vacation destinations is a new thing for Uber. (In spring, it also opened in other idyllic spots like the Berkshires and Mystic, Conn.; Kiawah, S.C.; and Eden, Utah.) But Uber’s on-demand model doesn’t quite seem to be working — at least not as well as it does in urban areas.

Islanders’ resistance to change is one reason. Uber’s resistance to small towns’ strict regulations is another. But ultimately it is the lack of reliable, round-the-clock drivers that has been the real obstacle. Cars will circle Oak Bluffs like sharks on a Saturday night. “But the drunk people can be annoying,” said Willie Simon, a nephew of the singer Carly Simon, and a part-time Uber driver. In Boston, where he is in school and drives for Uber part time, he might wait five minutes for a passenger, he said, whereas in Martha’s Vineyard it could be an hour. And if he is up island in Chilmark and the ping comes from Edgartown, a halfhour drive way, Mr. Simon said it is not worth the gasoline money or sitting in summer traffic to pick up a fare and then not have one waiting on the other end.

An occasional driver from Vineyard Haven who asked not to be identified because he has another job, said he earns roughly $250 a week as a driver. “It fills my tank, pays for lunch,” he said. “I’m not trying to make a living doing this.”

And that’s the thing: Few islanders are. Five or six drivers on the Vineyard was the estimate repeatedly given. “My friends have other ways of making 20 bucks an hour,” Mr. Simon said. “They have trucks or old cars they don’t feel like cleaning out.” Uber declined to comment on the number of drivers on the Cape and Islands. But Austin Geidt, the company’s head of global expansion, said, “We’ve seen overwhelming demand among riders and we’re always looking to bring more drivers onto platform to help meet that demand.”

This may be a bit overstated. Islanders’ transportation habits are well entrenched. Most locals and seasonal people have their own cars, parking is easy, and a bus ride is inexpensive (an all-day, island-wide pass is $8). Many people here said that while they are happy to have Uber — and see it as a solution to the island’s perennial drunk-driving problem, which worsens in summer — they would not use it.

What’s more, many tourists also don’t realize that Uber is available here. “Three full buses went by before we could get one,” said Bankole Ayodeji from Brooklyn, holding his toddler. “We didn’t even think about Uber. We would have totally taken it.”

On several occasions, when I opened my app in July, it flashed: “No Cars Available.” When I eventually did get Uber, on a Friday morning, I ended up paying $35, including tip, for a 13-mile drive from Vineyard Haven to Chilmark. I rode alone in an Audi sedan with leather seats. A taxi the following Saturday morning from Chilmark, called after another failed Uber attempt, cost me $60, including tip, to take me just two miles farther. I sat on a frayed tapestry, the driver was nice and on time and said his gig came with seasonal housing. (Which is harder to find on the island than Uber.)

It’s the same on Nantucket, said Briana Johnson, 25, a bartender at the Rose and Crown. “I can never get a Uber in the morning,” she said. “But I’ve taken it three nights after work. It’s been the same guy every time.” Dealing with small town regulations has led to some complications for Uber. After starting service in East Hampton two years ago, Uber suspended its operations in June because it refused to comply with local rules that all drivers have a local business office. On the Vineyard, Edgartown has fines up to $375 a day for any driver caught picking up passengers unless they adhere to the same licenses and laws as its taxis — including displaying the company logo on both sides of every vehicle and the town name on the back.

Uber was a good fit in East Hampton, where the social scene is an extension of New York City, and SoulCycle and Starbucks line the streets. But Uber’s arrival represents a bigger cultural clash on Martha’s Vineyard, where people still hitchhike, uphold the existence of dry towns, and leave their doors unlocked. The only chains that squeaked through are Stop & Shop and a Dairy Queen camouflaged by cedar shake shingles. And for better or worse, the old rumbling vans that await the ferries are as much a part of the landscape as the stone walls and sailboat-dotted ponds.

You would expect islanders (who eschew all things corporate) would support their local taxis in the face of a behemoth like Uber. And some do, citing potential congestion around the ferries and the fact that cabs will stick around come winter. But many locals see Uber as a refreshing alternative to a broken taxi system, plagued by rude drivers, rundown vehicles and steep, inconsistent fares.

“Every time Uber is mentioned in the local papers, it’s followed by hundreds of hateful comments about the taxis. Really mean stuff,” said Mr. Hickey of Bluefish Taxi. (He’s not exaggerating: “Is any creature more reviled on this fair isle than the surly taxi driver driving like an escaped psychiatric inmate in his dingy van? Perhaps the lowly deer tick … Or perhaps not,” posted Rex Treadwell of Tisbury.)

“I don’t even know why Uber wants to be on Martha’s Vineyard,” Mr. Hickey said. “They must think there’s gold in the hills. I work 100 hours a week and am just getting by.”

Despite Uber’s recruitment efforts, its doubtful more drivers will sign on at this point. After all the hoopla, as its inaugural season winds down, Uber has been a bit of a bust. Even Mr. Hickey admits his “slow death” comment back in April has yet to prove true. Business is busier than ever, said Casey O’Connor, who helps manage 25-year-old Stagecoach Taxi, which recently added an app and tablets to compete.

Still, the island will always appeal to purists, like Coco Dowling, a Columbia University sophomore and summer clerk at Edgartown Books. “The other day, I biked from my house to Back Door Donuts at sunset,” she said. “I think it made my doughnut taste better. If I’d just tapped my iPhone for an Uber, it wouldn’t have been the same.”