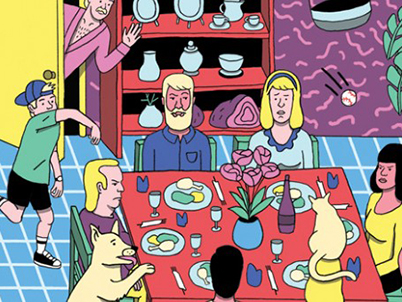 The Comfort Food of Strangers

At first I think we might have come to the wrong address. When my cousin Dave and I ring the bell of a Bartlett Street duplex right on time, minutes pass before the door opens—revealing a blue-haired guy in a white V-neck T-shirt with a toddler hanging all over him. “Hi,” he says, as we size each other up. The presence of a cute, soon-to-be-crying little person catches me off guard. It’s one thing to have dinner with my own children or those of friends, but eating elbow-to-elbow with some random kid is not really my idea of a night out. Then again, this is more of a night in.

We slip off our shoes, climb the old Victorian’s carpeted stairs, and are fumbling with the baby gate when Eden, the guy’s wife and our host for the evening, ushers us in. On Feastly, a new San Francisco–based meal-sharing site, she’d advertised the dinner she’s about to serve us as a “hearty Thai family supper”—but standing awkwardly around her stove making small talk, I’m wondering what I’ve signed up for, exactly.

It was only a matter of time before the sharing economy took over the home kitchen. In the last few months, startups like Feastly, EatWith, and Cookapp have arrived in San Francisco, luring locals hungry for the next big thing into the homes of total strangers who like to cook and hope to make a few bucks, maybe find some new friends, and perhaps, if they’re lucky, gain a following.

Eden’s Mission rental is nowhere near as hip as the restaurants near it. Plastic toys are strewn about; toiletries clutter the split bath. Stacked against the dining room wall are boxes of bulk diapers, draped with purple gauze to minimize their intrusion. But the table is lovingly set with carved-wood chopsticks and floating elephant-shaped candles.

I’m half wishing that I were at home watching Homeland and eating Lers Ros takeout when I catch a whiff of fresh lemongrass and ginger. After my first sip of tom yum gai—and some gratis sauvignon blanc—I’m feeling soothed. And soon enough, I’m laughing with a table of six strangers over pumpkin curry and the cow-tipping of Smart cars.

Eden spent just “three days, once” in Thailand, she says, but she worked for several years under a Thai chef in Austin and ghostwrote a Thai cookbook. Because this is her first Feastly supper, the company’s chief operating officer, Leigh Goldstein, is at the table too, making sure that all is kosher, figuratively speaking. As it turns out, the $40 meal’s pacing is off, the two curries lack kick, and the dessert is plastic-wrapped mints—but overall, the meal is pretty good. Not Lers Ros good, but more fun than sitting at home—which for some is a huge part of the appeal of this weird new breed of dining experience.

“We see the dinner table as the original social network,” says Feastly founder Noah Karesh, who conceived the company after he and his girlfriend were invited home for supper by an avocado seller during a visit to Guatemala. “The meal was magical,” Karesh recalls. He wanted to re-create that authenticity here and, in doing so, build a community. “Someone may have 5,000 Facebook friends, but still eat dinner alone,” he says. “We want to bridge the divide between offline and online.”

It seems to be working. What were once considered underground supper clubs are inching toward the mainstream—at least in urban areas. In June, EatWith founder Guy Michlin moved his headquarters here from Tel Aviv to be closer, he says, to Greylock Partners, his new investors. Cookapp launched in Buenos Aires in 2013 and expanded to New York and San Francisco earlier this year. Year-old Feastly also recently relocated here from Washington, D.C. And there are others, like Cozymeal and SupperShare and PlaceInvaders.

The sites have much in common. Meal prices are set by the cooks, all of whom are vetted (some more vigorously than others, based on my experience—EatWith says that its acceptance rate is only 4 percent). Each site offers a staggering variety of themes and cuisines, from singles’ oyster night to paleo desserts to a paella party. “Restaurants can get boring,” Feastly’s Goldstein tells me during our meal at Eden’s house. “You know what to expect. This is more like an adventure.”

Still, this kind of adventure can be a tough sell in a city already drowning in upwards of 2,400 restaurants. Michlin, who has had respectable success with EatWith in 162 cities around the world, admits that launching in the Bay Area has been a challenge. “Tel Aviv has a food scene, Barcelona has a food scene, every city has a food scene—but I’ve never seen anything like this,” he says. “San Francisco is very competitive. We have to draw diners away from restaurants. It hasn’t been easy.”

It isn’t easy for me, either: My friends don’t jump at my house-hopping invites. Cousin Dave is into the idea because he’s an up-for-anything kind of guy, but my friend Raina, visiting from Manhattan, has zero interest in EatWith’s fried chicken night at Lindsay’s apartment. She hates chitchatting with people she’ll never see again, and there are a zillion real restaurants that she wants to try instead. Lavinia reluctantly agrees to EatWith’s Pugliese Pasta Night at Kai’s but then regrets it—there are too many olives for her taste. My friend Anne—who thinks that we’re planning to hit a new restaurant in Noe until she rereads my text and realizes that we’re actually going to Seafood Wednesday at the house of a man named Mitch—replies, “Shit, do we have to?”

But Seafood Wednesday proves to be a happy meal. The work of Mitch, a payment and fraud analyst and a Cookapp member with multiple CSA memberships, and his friend Justine, it’s worth the $65 price tag. “It’s Seafood Wednesday because the fish comes in on Tuesday,” explains Mitch. He’s the kind of home cook who carries vanilla beans back from French Polynesia—Justine used one of them in a tarte tatin that I’m still thinking about. Their multicourse meal is as good as any I’ve had at my favorite San Francisco restaurants—more memorable, in a way, because it wasn’t at a restaurant.

As we eat his food in his immaculate, Zen-inspired home, Mitch explains why he joined Cookapp. “My friends don’t care that I spent 10 hours making this fish fumet broth,” he says. “I like cooking for people who appreciate it.” He surveys our motley table. “And maybe I’ll make friends who do, too.”

Maybe. That’s a lot of pressure to put on someone who just came for the fresh-caught poached albacore. But when you sign up for one of these dinners, you’re signing up for a peek into people’s lives. You might learn that your host uses Natural Organics for Hair Loss shampoo or is trying to get pregnant. You’ll likely be invited to yoga or a playdate or, at the very least, asked to come again.

But would I? Why chance a half-baked chicken at Chad’s house when Zuni accepts walk-ins? The city is saturated with exceptional restaurants, and we’re spoiled. That said, food-sharing sites, like food trucks before them, are bound to expose some truly great cooks. And where there’s good food in San Francisco, there are always takers.

As Feastly’s Goldstein says, showing up on someone’s doorstep for supper is an adventure. And it’s one that I’m up for—occasionally. But at the end of the day, I’d probably take the sure bet of the communal table at Nopa over someone’s random dining table in NoPa.