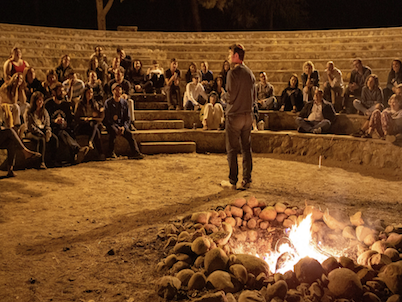 As if on cue, the first camper I meet is a guy named Josh: a nice, 27-year-old Jewish boy with kind eyes, a subtle smile and the same name as my husband, another nice Jewish boy, back home.

“Do you know where Malbec is?” asks this Josh, Josh Blake, rolling his eyes, and then his suitcase, over a wide dirt path flanked by rickety cabins that have been renamed for the weekend. (Malbec and Cabernet, for the men; Pinot Grigio and Rosé for the women; Raisins for all.) “I don’t want to walk all the way over there, if it’s back there …” he says, sounding not unlike Woody Allen.

I don’t blame him. The camp is desert-hot and dusty. And he’s ultimately here, he later admits over bagels, because his parents paid the all-inclusive $525 for him to be. They met on this very land, albeit half a mile away. “Talk about pressure!” he says, laughing.

Ilana Rosenberg, 31, sitting nearby, agrees. “My mother said, ‘Have fun! Go meet your Jewish husband!’ My sister was like, ‘Mom, she could find a Jewish wife, too, you know’.”

American Jewish University owns these 2,800 acres in Southern California’s Simi Valley, which is home to rolling hills and herds of cows, the university’s Brandeis-Bardin Campus and Camp Alonim. Over the next three nights and four days, this 66-year-old summer camp for Jewish kids has been commandeered by a new kind of summer camp — Trybal Gatherings, for Jewish adults.

Trybal Gatherings was founded by Carine Warsawski, 34, a buoyant, Boston-bred M.B.A., with the goal of fostering lasting community among Jews in their 20s and 30s, and, ahem, a few in their 40s.

She held her first Gathering at Camp Eisner in the Berkshires in 2017, roping in mostly friends of friends. Over Labor Day weekend, it sold out, with 125 campers and a wait-list dozens’ deep. Last year, she added Wisconsin; next summer Atlanta, and has plans to expand from Seattle to Austin to Toronto.

Whereas traditions like Birthright Israel offer free trips to the homeland, Ms. Warsawski’s aim is to offer an immersive, low-commitment experience closer to home — one rooted not in Zionism or religious doctrine, but in the shared nostalgia of a Jewish-American rite of passage, complete with archery and horseback riding, and a roster that reads like it’s from the Old Testament. (At one point, I’d forgotten my name-necklace. “That’s O.K.!” someone joked. “It’s probably either Sarah or Rachel.”)

There are two main differences between Jewish kids’ camp and Jewish adults’ camp: No bedtime, and booze, lots of it. Kiddie-pools brimming with hard seltzer at Bubbe’s Beer Garden. Bottles of cheap wine at supper. Compostable flutes of bubbly at Arts & Crafts.

Also, adult campers have careers, though no one talks about them. Web developers and screenwriters, wedding planners and wardrobe stylists. And yes, a few doctors and lawyers. The majority came solo; others hand-in-hand and interfaith or happily married in matching outfits, like Emily and Rachel Leavitt — my Secret Santa, er, Mystery Moses.

It’s a mix of die-hard camp people reliving their glory days, once-homesick campers redoing their awkward years, and first-timers wondering what all the fuss is about. “My parents were immigrants from Iran! They didn’t know about camp!” says Baha Aghajani, 30. Neither did Saraf Shmutz, 39, who moved from Tel Aviv to San Diego. “My summers were ‘go play soccer and bug off.’” 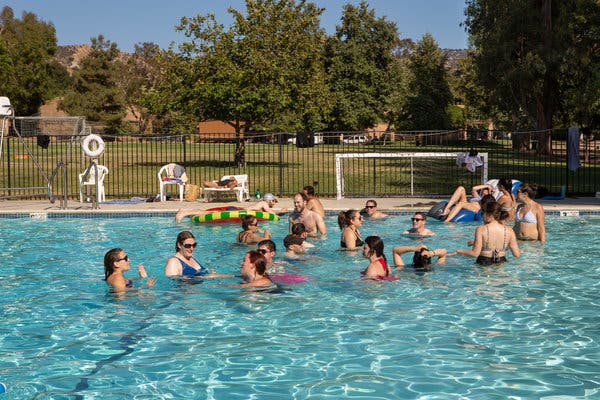 As a writer who hasn’t been back to her camp, Young Judaea, in New Hampshire, in 25 years, I signed up to learn what’s moving Jews to opt for uncomfortable bunk beds and kosher-style mess halls, in lieu of a real vacation.

Trybal isn’t the only over-21 camp cropping up these days. Nor is it the only Jewish one. Camp Nai Nai Nai, which also operates on both coasts, and attracts a post-college, more conservative crowd. And “55+” Orthodox Jews have been davening at summer retreats for decades at places like Isabella Freedman where campers crochet kippahs and take day trips to Tanglewood, in the Berkshires.

Trybal is arguably the only camp, though, that starts the day with an “Abe Weissman Workout,” a calisthenics routine straight out of “The Marvelous Mrs. Maisel.” (Tomato juice refreshers included, but no rompers.)

It’s also, explains Ms. Warsawski, “a place for people who are more -ish than Jew.” Like Molly Shapiro, 28, of Berkeley. ““This is my jam!” she says. “Synagogues today aren’t really designed for us. We want something less traditional, more affordable, more fun. I mean, playing cornhole isn’t Jewish, but we’re playing cornhole together!”

Togetherness is what Trybal is all about. The schedule is packed from early morning to midnight with get-to-know-you-games and group activities like partner massage and mah-jongg, pickling and pool time. 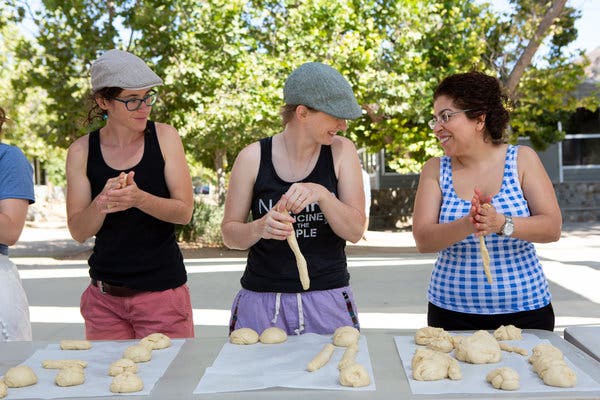 The next morning, I pass up dreamcatcher-making for challah baking. “Oh yeah, this is what I’m here for,” says Abel Horwitz, a young Robert Downey Jr., kneading dough we’ll later braid and adorn with toppings beyond the traditional sesame. Rainbow sprinkles. Peaches. Jalapeños. “Will 20 loaves be enough for all 60 of us tonight,” some Jews worry.

Next, it’s a tossup between the relationship workshop and the ropes course. I decide I like humans more than heights and head over to hear what the visiting Rabbi Sherre Hirsch, has to say. She reads a passage from the 20th-century philosopher Emmanuel Levinas and tells us to partner up. A 26-year-old named Sam and I stare into each other’s faces for a full five minutes. “Sit with the discomfort,” the rabbi urges. Reluctantly, I do. I smile. He winks. I wiggle, examining his wrinkle-free forehead and bushy eyebrows bound to grow bushier in old age, until my awkwardness turns to calm. I’m overwhelmed by a deep feeling of curiosity and compassion for this man, for myself, for humanity.

“That was a good reminder,” Ms. Aghajani says afterward. “To give people more of a chance. To not swipe so fast.”

After a grilled cheese buffet, there’s solar art and yoga and Slip-n-Slide kickball. I head for the hammocks, where a guy with long red hair is lounging in a tie-dyed Helvetica T-shirt that reads “Falafel & Sabich & Hummus & Schwarma.” It’s his third Trybal. He is the camp guitarist, and a rocket scientist in real life.

“I come to be a kid again,” Jeremy Hollander, 34, says. He pauses. “And to, you know, be with my people.” In real life, he doesn’t bring up the fact he’s Jewish. “‘Hollander’ isn’t ‘Schwartzenbaum’. People see me and usually think I’m Scottish or something.” He feels safer that way. Especially today, he says, with rising anti-Semitism. “The flame is being fanned. You never know who has what opinions. Here, I can let my hair down.” (Although, technically, it’s in a ponytail.)

“The only one thing I have to worry about at camp,” he says, “is when am I going to squeeze in a shower?”

Still, before sundown, we all emerge from our bunks neat and clean and dressed in white. “Can you believe I got this for $2.99 at Saks Off Fifth!” exclaims Lauren Katz, a volunteer staffer wearing lace. (We can’t.)

We gather in a stone-lined grove, to sing and sway and cheek-kiss “Shabbat Shalom,” before making our way to the dining hall for a sit-down dinner of roast chicken. And, of course, plenty of challah.

It’s all so familiar to me. The tunes are different, but the Hebrew words are the same. The trees are eucalyptus, not pine, and Mr. Hollander is not the longhaired, tie-dye-clad musician from my old camp, and yet — he could be.

I agree with what he said earlier. There is something easy and assuring about spending a summer weekend like I used to (albeit for eight whole weeks): with my people. Or, at least with people who remind me of my people. New friends bonded by old memories.

Trybal is like a modern millennial shtetl, where gesundheits fly. And “Hava Nagila” plays at a Hawaiian luau. And campfire stories include, “How I Became a ‘Nice Jewish Guys’ Calendar Model.”

It’s a world where conversation flows from the Netflix show “Shtisel” to the lack of Jews in Santa Barbara to the universal disdain for online dating (despite the fact that Trybal is sponsored by JSwipe), to whether Ms. Rosenberg indeed met her future husband.

“We’ll see,” she says, smiling. She did make-out at Arts & Crafts with the Trybal barista: a boy she barely remembers being at her bat mitzvah.On the last night, I slip quietly out of the luau, where the D.J. is rocking “Lean On Me.” I leave the Leavitt ladies in their twin Hawaiian shirts and my Rosé bunkmates dancing the macarena. Mr. Shmutz and the Cabernets are making reunion plans. Mr. Blake is flirting with one of his crushes.

I have an early flight to catch. Back to my husband and kids and, in a way, the future. In the morning, I’ll miss the friendship bracelets and the compliment circle and, like a true last day of camp: tears. For a moment I have FOMO. And then I realize, it’s fine. Sometimes an Irish goodbye is just as good as a Jewish one.