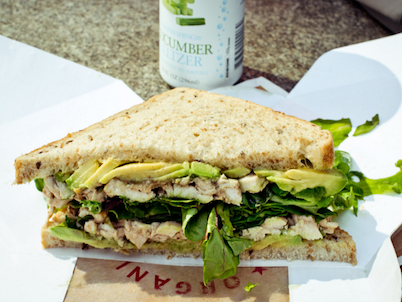 The deli menu at the Gramercy Food Market, a 24-hour bodega at the corner of East 22nd Street and Second Avenue, offers half a dozen grilled chicken sandwiches named for men of a certain stature: There’s the Al Pacino (with spicy dressing), the Larry King (with Russian dressing) and the John Lennon (with chipotle sauce). Each comes with a free bag of Lay’s and a Pepsi. But Wylie Dufresne doesn’t do lunch here. Only breakfast. And only before 11 a.m. (to avoid the $1 late-breakfast fee). And so frequently that the guy behind the counter knows his order: one egg on a roll ($2). Except Dufresne takes two eggs (for an extra 50 cents). “It’s a classic New York egg-and-cheese — the best,” says the chef, who lives nearby. “There are so many bad ones. It’s so satisfying when it’s done right.”

Dufresne takes the foil-wrapped sandwich with him down 23rd Street, walking at a rapid clip. He’s dressed more like a hiker than a world-renowned chef revered for artfully plated, scientifically forward food, including delicacies like fried mayonnaise and savory everything-bagel ice cream. The iconic dishes he served at his now-shuttered restaurant WD-50 influenced an entire generation of molecular gastronomists. But on this day, he’s preparing for the opening of Du’s Donuts & Coffee, a much more casual joint situated at the William Vale Hotel in Williamsburg. (The space is now open.)

“My friend says I look like I’m ‘forever camping,’” he admits, referring to the waterproof backpack usually strapped across his chest, and his dry-wick North Face shorts crammed with mini flashlights and a pocketknife.

As for the hot breakfast sandwich in his hand, he says, “You can’t eat it yet. It’s not ready.” Not ready? “The cheese hasn’t melted yet. It’s still steaming.” Also, he needs coffee — which he didn’t order at the deli because, he says, “I won’t drink bad coffee.” And he is constantly on the hunt for good coffee.

Since the closing of his restaurant Alder two years ago, Dufresne has roamed Manhattan in search of two “meaningful coffee experiences” a day. He pulls a binder clip, fat with punch cards, out of one of his many pockets to prove it. He recounts stories of buying two coffees and only receiving one punch, being called “Willy” by baristas — and sometimes using his eldest daughter’s name, Sawyer, only to see it scrawled onto his cup as Soyer.“Guess they’ve never heard of Tom?” Dufresne laughs. He fans out his punch cards like a poker player proud of his hand: Everyman. Birch. Ground Support. Toby’s Estate. “Ah, they owe me a free one…” he says, pleased.

Turns out, so does Brooklyn Roasting Company, where he ends up this morning. Standing in line, corralled by velvet ropes, he whips out his phone and started the timer. “I always time it,” he says. (He refuses to wait for longer than eight minutes.)

He picks up his short latte (no sugar, no lid). It’s a warm spring day, but even in the dead of winter, Dufresne’s latte is iced — with the proper milk-to-espresso ratio only his most regular baristas get right. Purists might balk at putting milk in coffee, Dufresne says, “but for me, it’s all about coffee andmilk. They’re friends,” he explains. “Like bread and butter. Wine and cheese.”

Speaking of, 15 minutes after leaving the bodega, his cheese is ready. Dufresne unwraps the sandwich to reveal a lightly toasted Kaiser roll, eggs scrambled, a slice of American oozing in its orange-hued glory. Though Du’s is strictly doughnuts (10 highly technical flavors, including peanut butter yuzu as well as Creamsicle), eventually he plans to add an egg-and-cheese of his own — on an onion Kaiser. He really likes onion Kaisers. In fact, Dufresne has a lot of likes (and dislikes). Some more mass-market than you might expect from a James Beard Award-winning chef just back from the World’s 50 Best Restaurants ceremonies in Melbourne.

He likes Popeye’s fried chicken so much he served it at his wedding. He likes the occasional McDonalds burger (no ketchup, no pickles, no sauce). He really likes the NBC Nightly News with Lester Holt, enough to DVR it. And despite the ostensible competition, he deems Dunkin’ Donuts’ chocolate glazed “perfect.”

Unlike most of America, though, he prefers to finish his coffee while seated rather than taking it to go. “I don’t like holding anything,” he explains. (Umbrellas, in Wylie’s world, are especially ridiculous.) “Scrubbies,” however, are essential. He makes a beeline for Home Depot, which he navigates with the speed and expertise of a star employee, and goes directly to the Scotch-Brite Extreme Scrubs. “So much better than Scrub Daddy,” he says. “Shark Tank’s biggest seller ever!”

Errands done, Dufresne has one last stop before it’s time to test the doughnuts at Du’s: Pret a Manger. He eats Pret for lunch pretty much every day. The chain has 50 locations in Manhattan, and “I’ve got four in my rotation,” Dufresne says. But only one order: the balsamic chicken and avocado sandwich, a cucumber seltzer and a brownie bite. “It’s fantastic.” As good as Maile’s, he says, referring to his wife, who is the editor in chief of Food Network magazine.

He first tried Pret when Sawyer was a toddler. It was easy. She liked chicken. On his day off, they’d sit on a rock in Union Square, near where he grew up, and share a sandwich. “I remembered thinking, ‘That’s tasty.’”Years later, without WD-50 to feed him, and in a moment of nostalgia, he rediscovered Pret’s chicken sandwich. “Next thing I knew,” he says, “I was eating it four times a week.” Soon, Dufresne started bringing his laptop, taking phone calls; Pret became his de facto office. “Setting up investor meetings, my business partner once asked, in all seriousness: ‘Which Pret do you want to meet at?’” he recalls, laughing. “This woman was giving us $75,000. I picked the Nomad instead.”

Only twice has his Pret order strayed — to the chicken soup, and only because he had a cold. He has the utmost praise for the prepackaged sandwich. “It’s smartly engineered,” he says, explaining that the grilled chicken, not the mesclun, is dressed in the balsamic vinaigrette and sits between the dry lettuce and the avocado, so the bread doesn’t “sog out.” He takes it outside to Sawyer’s rock and eats every bite except the brownie bite. He likes to save it for later, for his second coffee experience.

Meanwhile, Dufresne can’t help but laugh about his steadfast devotion to eating Pret’s chicken sandwich. “We’re all creatures of habit,” he offers. “At least it’s not a candy bar.”