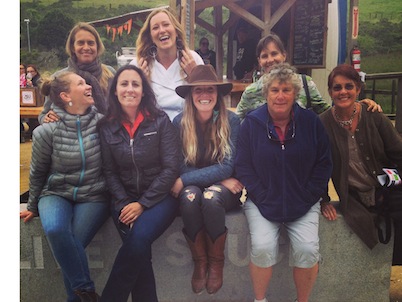 Modern Farmer talked to Marnie Jackson, who traded in her urban life for a rural one in Marin, CA. Now she’s the founder of West Marin’s new Homesteader Group and says she’d rather slit birds’ necks than get her nails done. Pictured above is the club touring  Hog Island Oyster Farms, led by homesteader member Elizabeth Hill of West Marin Food & Farm Tours.

So you fled the suburbs for Nicasio?

Eight years ago, we were living in Menlo Park, in Silicon Valley, and we were starting to get rolled into that life: nannies, nail salons, Nintendo, and I was, like, wait a minute, this doesn’t feel right; this isn’t where I want to raise my kids. I’m American, but I grew up in a small Italian village with a 400-year -farmhouse next door. In Menlo, we had a veggie garden and chickens in our backyard, and I liked to hang my laundry outside to dry. But people didn’t think that looked very good in the Stanford neighborhood. I was on the local news and everything. A friend of mine from West Marin called and said, “You don’t belong there. Move up here.” Three weeks later we found a house and actually did.

How was the transition into rural life?

We became animal acquirers, we got horses and rabbits and sheep and laying hens. We live on a hill above a pond. But it wasn’t all roses that first year: there were also things like mountain lions and ticks with Lyme. When we found a rattlesnake curled up in our baby’s room, I said to my husband: I can’t believe we did this! It’s funny — in the suburbs we had block parties and neighbors who lived three feet from away. But I immediately found deeper connections in Nicasio, even though we can’t even see another house from ours’ and our friends live miles away.

What gave you the idea to start a homesteading group?

Well, first I’d actually started a book club, but everyone was into romance books or science books and I realized all I wanted to read was farming books. It just got, well, boring. We’d just sit around chatting, drinking wine, and I thought it would be more fun if we actually did something. Like our grandmothers used to. The ladies would come over, they’d get their aprons on, it was called “Putting Up Your Vegetables.” They’d pickle and can tomatoes and make jam. Everyone helping each other. I posted it on our local community website and word spread, we’ve got about 6 to 13 women, all ages, some in their twenties, some in their sixties.

One woman said, ‘I’d love to join but all I know how to do is make shoes.’ I said, ‘Are you serious?! Teach us how to make shoes!’

So, what’s it all about?

Sharing skills. That’s what we do. Once a month, someone teaches the group something new. The first meeting was at my house. I’ve got angora rabbits so we met by the rabbit hutches and I taught everyone how to care for the rabbits, how to sheer their fur, how to spin it into wool. We have sheep, too, so I like to take the soft fuzzy angora and blend it with the wool and make these great hats for the foggy weather. We also have one woman who knows how to make cheese, so we gathered in my kitchen one afternoon and she taught us all to make ricotta. It’s all very organic, Another member said, I’ll know how to catch wild swarms of bees. She had a whole presentation with handouts, online videos, a bibliography, and everything. I was, like, wow, all I did was talk about rabbits!

Any skills you don’t want to learn?

Nope. One woman said, “I’d love to join but all I know how to do is make shoes.” I said, “Are you serious?! Teach us how to make shoes!” Myriam Pasternack, of Devil’s Gulch Farm is going to teach us how to tan rabbit hides. She’s been doing this for 30 years; she’s amazing. She has medals from Obama for her volunteer efforts in Haiti! So when she called me asking to join, I was almost embarrassed. I thought, what can we possibly teach Myriam Pasternack? Turns out, she’d never made cheese before! So that was cool. Just standing next to her, I feel like I’m learning something.

Suddenly everyone wants goats! I’ve already got too much on my plate. But some members started a goat circle. They’ll mentor and milk and help care for each other’s goats. And I just ordered 15 chicks — we’re going to raise heritage turkeys. I told everyone, though, you’ve got to commit to slaughtering your own bird. It’s a lot of work. I’ll teach everyone how to do it, but when the time comes, you take your bird to your own corner. Then we’ll all come together on the tarp and pluck and eviscerate and clean, and take out the guts and intestines and legs and neck and all that slaughtering entails.

Any requirements to join the club?

My only requirement is no lookie-loos. Some people have said, “Oh, I just want to come watch.” Nuh uh. You’ve got to come ready to get dirty and muddy and bloody.