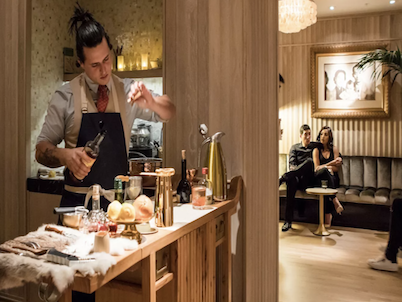 The walk to Chinatown’s most expensive restaurant isn’t easy. For one, hidden behind a chain-link fence down an otherwise desolate alley, the place is hard to find. But that’s not what I mean. What I mean is: Striding past so many homeless people huddled in doorways on your way to blow a thousand bucks on dinner is, well, hard to justify.

True, it’s an encounter we have in this increasingly stratified city every single day — but as I stepped around an old man outstretched in a sleeping bag on Broadway, I felt acutely conflicted about my upcoming evening at Eight Tables.

I also felt excited (if, in jeans, underdressed). The new, yes, eight-table restaurant was arguably San Francisco’s most anticipated opening of the year. George Chen is the brains behind Union Street’s 1990s trailblazing Betelnut, four restaurants in Shanghai, and in March, ChinaLive, the $20 million Eataly of dim sum downstairs. And now he was opening his “home” — or an opulent stage set of it — to the .5 percent, si fang cai-style. Or “private chateau cuisine,” as Chen puts it, a lavish, 10-course feast that takes entertaining tips from 17th-century China.

Sitting on a crushed-velvet settee waiting for my date, looking at framed black-and-white Chen family photos and listening to Miles Davis on a midcentury console record player, it indeed felt like I was in someone’s living room. Though when a fellow diner checked in and stiffly took a seat beside me, it felt more akin to an upscale doctor’s waiting room.

After several minutes of awkward silence, the fellow diner spoke: “I’ve never been to a restaurant like this,” he said.

Me neither. Because of the price and pomp, some might consider it the French Laundry with chopsticks; a Qing Dynasty-style Quince; a less-austere Benu. But, really, Eight Tables is unlike any restaurant this side of the Pacific — and exactly what chef Chen intended it to be: dinner at his place. The elegant, tan-hued, multi-room maze was regal but warm, with white embossed wallpaper fashioned from antique wedding dress patterns, cushy leather banquettes, and circular, semi-private tables that were comically large for two.

It also includes a full (and appropriately pedigreed) staff: Anthony Keels, a genius bartender who defected from Saison, along with GM Andrew Fuentes; Tony Kim, a sociable sommelier who came from the Clift; and a mannerly server named Huntly, who genuinely thanked us for asking his name. “People rarely do,” he lamented. Then snapped his fingers. “It’s just, ‘deliver my drinks, serve my food.’”

Which he did, flawlessly. He was aided by a fleet of mostly men wearing light-beige three-piece Ralph Lauren suits with a rainbow of patterned Hermès ties, who collectively looked like groomsmen at a WASPy summer wedding — and Chen, who came around to each table like the proud father, to introduce each course. (Chen was also wearing jeans, by the way, and a stained chef’s coat, looking a little schlubbier than a fine dining chef parading through his dining room usually does. I found it refreshing.)

I also caught a glimpse of an elderly Asian couple wearing white socks and matching Asics, and instantly felt better about my outfit. A good reminder that this is San Francisco: underdressing always goes.

The first course was a grid of mini multicolored porcelain bowls containing the “nine essential flavors” of Chinese cuisine. These bite-sized beauties tasted even better than they looked: sweet, a jujube date bursting with chrysanthemum honey; salty, sous-vide chicken coiled with cured duck-egg yolk; smoky, dark soy-marinated smelt wok-fried then smoked; numbing, paper-thin slices of beef tendon simmered in red and green Sichuan peppercorns that left my lips tingling until the next course.

Which was a next-level shrimp har gow dumpling: a delicate, open-faced quadrant brimming with Russian golden osetra caviar, trout roe, chives, creme fraiche, encircled by dollops of uni one night, curled on top another. Scooping it, and savoring it, like a Hoodsie Cup with a mother-of-pearl spoon, it had me wishing I could flag down this creation from any old dim sum cart, anytime.

But no, everything about Eight Tables is the antithesis of “anytime.” (For most civilians, it’s special-occasion time, if not once in a lifetime.)

What Chen has done at Eight Tables is take standard Chinese dishes and turn them into more glamorous versions of themselves. You know, like Queer Eye for the Straight Guy.A supplemental course referred to as “beef and broccoli,” for instance, was anything but the gloppy go-to take-out order. Rather, bright-green baby bulbs of tender Gailan hearts were plated sparingly with Miyasaki A5 wagyu, marbled hunks the color of cooked rhubarb and the texture of softened butter — and worth every one of its 6,000 pennies. (Although, on another night, it was a less transcendent experience.)

Barbecue “shao kao” became a trio that included sweet, smoky strips of Iberico char siu with a kumquat glaze; a crisp deconstructed Cantonese-style pork-belly sandwich about half the size of a Kit Kat, with more crunch; and a crackling Peking duck skin topped with Kaluga caviar teetering over a piece of feather-light shrimp toast — maybe my favorite bite of the night, save for the mushy fish eggs (which were farmed in the Hubei province of China, and not yet quite up to snuff. Still, Chen explained, he wanted to support their efforts).

On my first visit, Norwegian Icelandic cod steamed in banana leaf with hot ginger scallion oil, buried with lotus root stuffed and topped with shreds of pickled white melon,was silky, mild, and memorable, but a couple of weeks later, prepared with local cod and pickled cucumber, it was too firm, dry to the point of tasting almost parched. In a place that aims for perfection, the slightest imperfection — and inconsistencies — stands out. The velvet chicken, too, suffered a similar fate. Tender breast poached in shallot oil and enmeshed in slippery, snow-white egg whites and matsutake mushrooms came blanketed in Burgundy truffles, and yet, it was a bit bland. A kind of comfort food dish I’d be happy to eat elsewhere; here it was the faintest of them all.

It was a blip immediately forgotten, though, with the first forkful of the unctuous red “dongpo” pork that followed. The soy-braised, thick-cut pork belly looked, and tasted, as rich as a layered chocolate cake.

We would’ve been content to consider it dessert, actually. We were about eight courses in. And — having opted for the “beverage pairing” — about eight glasses in. We began with a Gosset brut, peaked with a decadent Peter Michael Bordeaux blend (paired with that pork), and in between, enjoyed the prettiest cocktail I’ve ever sipped. The Lily Pond: a palm-sized bowl of Martin Miller’s gin and floating nasturtium, mixed with “forest water” — cucumber juice, sorrel, and red shiso, spun in a centrifuge — prepared tableside, with tweezers and a flourish of liquid nitrogen, making the cocktail the new bananas Foster. Meanwhile, my friend, who rarely drinks, and declined the pairing, was loving, and feeling, his Thai Iced Tea Milk Punch, a white rum-based wonder that was smooth and subtle and creamy, like a real Thai iced tea, made with half-and-half yet magically clear.

Did we really need the two desserts that followed, on the heels of a foie gras-stuffed potsticker, no less? The first was a bracing chrysanthemum granita with plum preserve, and the second was what pastry chef Luis Villavelazquez dubbed “Chinese sea grass”: passion-fruit mousse capped with pickled sea beans and crinkled seagrass rice crackers and frothing with translucent, mesquite-infused bubbles that reminded me of the time I accidentally put dish soap instead of detergent in the dishwasher. It was more spectacle than satisfying, but — and perhaps this was the point — an unforgettable finale.

Did we really need any of it? Of course not. A dinner like this is all about indulgence.

What that means, I’m not quite sure. I never dined with 17th-century Qing dynasty nobles. Nor, for that matter, with 2017 Hong Kong elite. All I know is that after four hours hanging out with Anthony and Tony, Huntly and George, it felt a little like bidding farewell to new friends. Friends who hand you a bill, in a book of Chinese poetry (and inelegantly let you know that the service charge is shared throughout the house, but “anything extra” goes to them, which required us, woozy writers, to do unnecessary math in a moment that should be frictionless). Still, they’re the kind of friends you wish could come over and mix up milk punch at your place — the kind of friends only a fortunate few are able to afford.