The Usual: Tekka’s Most Regular Regular

It’s 8:49 p.m. on a dark, drizzly Monday, and Dan Weinberg and Shoshana Leibner are right on time for their reservation. After 2,000 dinners over two decades, Dan knows: Show up before 8:45 p.m., and Yoshimi Shimizu won’t have finished wiping down the counter from the first seating. Show up too long after 8:45 p.m., though, and her chef husband, Noboru, might not let even him in.

Dan and Shoshana have barely unwound their hot towels before they inquire about another reservation. “Are you able to do 10, for Scott’s birthday?” asks Dan.

“Ten’s too many,” Noboru calls from the back. He will do seven.

Tekka (537 Balboa St.) doesn’t technically take reservations. Its 10 seats typically command a serious sidewalk wait, especially with the owners’ preference to not necessarily fill all of them. The kind of wait where San Francisco’s sushi-obsessed civilians show up as early as 4:30 p.m. with camping chairs and beer and bundle up in Balboa Street’s fog, and wait, and wait, and occasionally watch — with a mix of awe and envy — as apron-clad Yoshimi opens the door around 6:30 p.m., peeks out from behind the little red curtain, and wordlessly waves in some unassuming couple who just walked up. Regulars.

Regulars who put in their time, and over time, earned Noboru’s trust, and Yoshimi’s cell phone number. Regulars who just shoot her a text, and she saves them a seat, plops a magnum of sake on the counter, and then serves them course after course after course — an off-menu omakase off-limits to everyone else — until they kindly have to tell her to stop.

Regulars like Dan, a freelance IT guy with a graying ponytail, and his partner of 20 years, Shoshana, a pioneer of flotation-tank meditation.

And regulars like their friends, who they met at Tekka: like Scott and Carolyn, and Bruce, Phillip, Marcel, Henry, and that nice guy who moved away years ago. “What was his name again?” asks Shoshana, calling up a photo on her phone from an especially fun night at Tekka, among reams of photos of especially fun nights at Tekka.

They do attend Dan and Shoshana’s annual Hanukkah party, after all, always bringing a platter of sashimi bigger than the two of them combined. As soon as they walk in, everyone — including Scott and Carolyn, and Bruce, Phillip, Marcel and Henry, who bartends — bypasses the latkes and homemade applesauce and makes a beeline for the buttery hamachi. Dan understands. He loves sashimi, too. Especially Noboru’s sashimi: pieces so fresh and wide and fat, he says, “you could surf on them.” 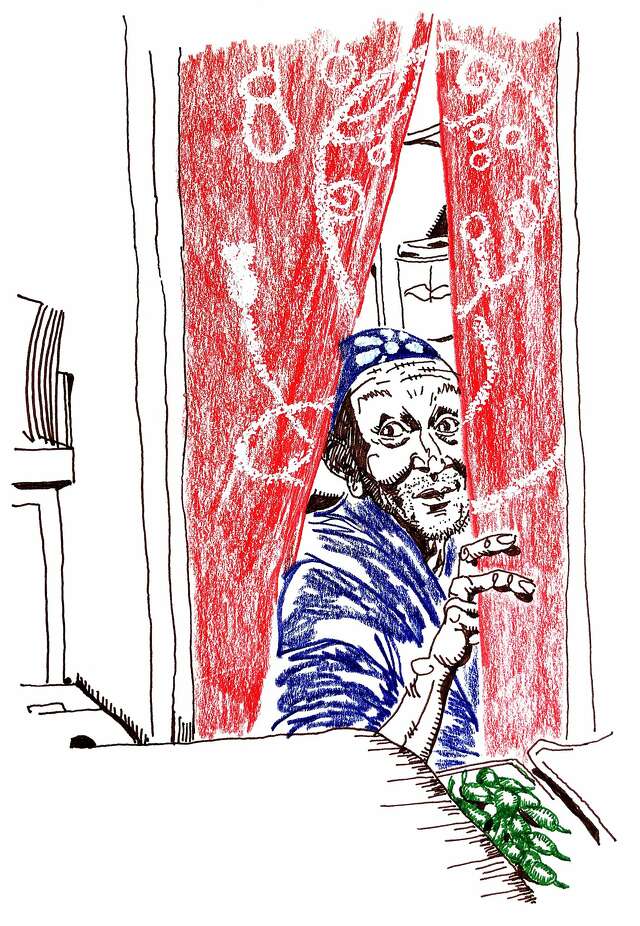 In the last few years, the city has seen an influx of sleek Japanese restaurants, with Michelin stars and $200 menus and counters filled with diners focused more on curating their Instagram feeds than consuming fish, making the atmosphere feel more Apple Genius Bar than sushi bar.

But Tekka, which turns 30 this month, is the antithesis of the trend, a tiny time warp in a city moving at warp speed. Tekka feels like the kitchen of a couple who have been married for 50 years — a cluttered, cash-only kitchen walled in old photos and Japanese prints and placards of handwritten love letters from customers he’s invited to write one, including Dan and Shoshana.

In one corner, by a window, where at any other San Francisco restaurant a rent-generating table would be, is essentially storage: cases of Sapporo topped by an upturned stool and dusty space heater. And behind the bar: shelves of mismatched dishes, a burnt toaster-oven for eel, an old Sony clock flashing red digits. Also nearby is a small television with a DVR that Dan bought for Noboru ages ago, after the one he’d bought him before broke.

It used to loop Bee Gees videos all night, every night. Noboru loves the Bee Gees.

He has ever since he came to this country at 19. He joined the U.S. Army and fought in Vietnam as a fast-track to citizenship. A father of three, he spent most of his career working for a Japanese airline and partying overseas, until Yoshimi told him, no more: They would open a restaurant in the Inner Richmond.

“I like to dance discotheque,” he says, striking a petite John Travolta pose. “Remember, Nobu? When we’d have dance parties here until 2 a.m.?” asks Dan. He smiles. He does.

One day, Noboru received a cease-and-desist letter from the Bee Gees’ people saying it’s illegal to play the same music video over and over in a public space. Another regular, an attorney, fought it pro bono on the chef’s behalf, and the Bee Gees came back on.

Dan and Shoshana are, too. How could they not be?

They’re the only people in the place, their place: sipping bottomless ceramic cups of sake and eating creamy-cured squid topped with uni and bottarga; and steaming bowls of nasu; and ground pork bathed in ginger; and a piping hot tangle of sauteed enoki mushrooms revealed under a crumple of tin foil; and flaky halibut katsu; and a soothing broth brimming with bok choy. “No more, please,” begs Dan. “We’re done.”

Noboru takes a seat on a crate in the kitchen and calls Japan, on speaker. “That’s his old friend,’ says Dan, pointing to a photo above the bar. He’s sick, his heart. Yoshimi and Noboru come out, holding up their shared cell phone for Dan and Shoshana to say hi; the four of them crowd around, as if squeezing into FaceTime, except they’re not on FaceTime.

“Come see me before I go!” says the cheery voice on the other end. “We will!” Dan and Shoshana yell into the phone. They promise.

In the beginning, Dan ate at Tekka several times a week. When he started coming four nights in a row, Noboru cut him off. “‘Three nights is the limit,’ he told me. ‘Take a break.’” So, Dan slunk back to Ebisu. “The owner there was like, ‘Where have you been?’”

The thing about Ebisu, though, about every other restaurant in the city (“even the very best restaurants in the city,” says Dan), is that they’re just never as good. They’re never as fun. They’re always more expensive. And “they’re never like . . . this.”

By this, he means homey, happy, abundant, a restaurant that feels less like a night out and more like a night in.

Tekka is open weeknights only, two seatings a night. Occasionally they’ll close on a random Wednesday for, say, a golf tournament. Noboru and Yoshimi love golf. There was a time, a few years ago, when another regular supposedly rigged Yelp to say that Tekka had closed. It hadn’t.

“It can’t!” cries Dan, who knows that Yoshimi and Noboru are getting tired, and that sooner than later, it will.

These days, Dan goes once or twice a week. Not always with Shoshana, but always on his birthday. (As well as the night before his birthday. “Not everybody can fit at once,” he explains.) He always comes on Noboru’s birthday, and on Yoshimi’s birthday and on June 16, Tekka’s birthday. (All dates etched into his calendar.)

And always on Fridays, after 8:45 p.m., with his merry band of regulars.

And almost always that supersize slab of sashimi is too much for Shoshana. She walks her leftover fish into the back for Yoshimi to wrap, which she does, often in a real dish. “She knows we’ll bring it back,” says Dan. Shoshana likes to cook it up with butter for breakfast.

Sometimes she cooks for Noboru and Yoshimi, too. They love her turmeric-tinged roast chicken, which she’ll bring to them in a Tupperware container on request.

When Shoshana was going through breast cancer, she could barely eat anything at all. Sashimi would just stick to the roof of her dry mouth, she says. But she came anyway. Yoshimi made her broth. Noboru buoyed her spirit. Tekka nourished her soul.

“Dan and I might be fighting, and then as soon as we sit down, everything’s fine,” says Shoshana. “It’s like you walk through this door, and you’re in a different world.”

It’s like you’re in a different city. Or at least the city it used to be, before the $21 cocktails and the $1 million one-bedrooms and the $100 billion valuations. A city where an immigrant couple can run a true mom-and-pop restaurant on their own terms, and raise a family — and unintentionally create another one, that crosses cultures and countries and decades and bloodlines.

A city where almost anyone can afford an exclusive omakase experience in the chef’s kitchen. Well if, and really only if, you’re a regular.

Noboru and Yoshimi unabashedly play favorites, and no one faults them for it. “This place exists for them,” says Dan. True, every restaurant takes care of its regulars — but not all regulars take equal care of their restaurant, of the lives and livelihood of the people who run it.

It’s close to midnight by the time Dan and Shoshana get up to leave. Dan pulls a small wad of twenties from his wallet and bids Yoshimi and Noboru a long, Jewish goodbye at the door, as if it might be a while until they meet again. “OK, goodnight,” he says. “See you Friday.”