Joel Zimei and Deli Board’s Adam Mesnick are talking, as apparently men do, about meat sweats. Meat sweats? “You know, if you eat a burger and a hot dog at a tailgate, and then at the game you’re like, ‘I’m going to get a cheesesteak!’ and then you go home later and have filet mignon for dinner,” explains Joel, biting into a sandwich the size of a newborn. “That’s it: meat sweats.”

Does Deli Board give him meat sweats? Nah, he says. It’s a lot of meat, but not enough meat to make him meat-sweat. Joel regular-sweats, though, rather profusely and frequently and even in the fog.

It’s his outfit: a 10-part, 30-pound furry getup he dons on average four hours a day, five times a week, six months a year — plus, another month or so in a good year (which it’s looking like this year isn’t).

“I had a little thermometer and it’s 37 degrees hotter for me than it is for you,” says the 46-year-old part-man, part-seal. Lou Seal. The San Francisco Giants’ mascot — a character, and costume, that Joel has lived and breathed (in) for the last 21 years.
Running around a stadium dressed as a seal requires sustenance. Oracle Park has plenty of food options, of course, more than most ballparks, and new ones every season. Like Super Duper and Javi’s empanadas, and Cream’s ice cream sandwiches and Tony’s Slice House, which unfortunately Joel can’t have, he says. Lactose issues.

The media room, which feeds mascots too, often does it up, offering chicken kare-kare and pinakbet on Filipino Heritage Night, or wok-fired gai lan and fried rice on Chinese Heritage Night. But nothing, says Joel — not even Crazy Crab’z “phenomenal” crab sandwich — compares to Deli Board.

Sometimes, he’ll send one of his “seal-curity” guys over to Deli Board for a pregame pickup. “It’s usually after a loss, when we need good luck,” he says. “I’ll be like, ‘GO GET THE LUCKY SANDWICH!!’”

Joel admits he is “ridiculously super-duper-stitious.” There was a bagel shop off Townsend that used to be his lucky lunch. The Giants won the 2010 and the 2012 and 2014 World Series with those bagels after all. But when the shop’s ownership changed, Joel realized, so did his luck.

In 2015, he discovered Deli Board at 1058 Folsom St. Although he didn’t know it at first. His wife happened to bring him home some ginormous turkey clublike concoction one day — without realizing it was sandwich royalty.

“It was one of those euphoric food moments,” Joel recalls. “I remember scarfing it down, thinking I shouldn’t eat the second half. But then, of course, I did.”

A few months later, he got a Twitter notification, something along the lines of: “Hey @LouSeal01! I made you a sandwich. Come try it sometime.” Joel realized it was the same place he’d had the sandwich, and bonus: He lived nearby.

So, he put on one of his three World Series rings (proof of identification and all) and walked the few long SoMa blocks over to Deli Board. Adam was manning the register.

Adam was starstruck and Joel was overjoyed. “Except I couldn’t eat my own sandwich,” he says. Cheese. So, Adam remade it for him without the provolone. Joel exchanged it for a signed Lou Seal bobblehead. And a new friendship was born. 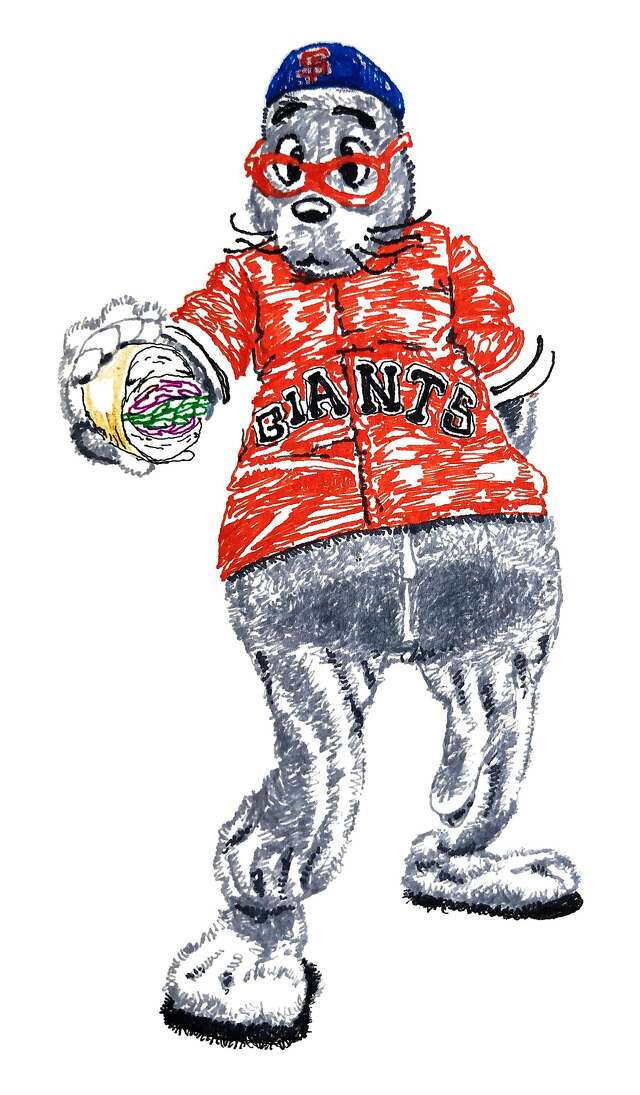 “I had an issue for a while,” admits Joel. “I gained a couple of pounds.” He’d started lunching there a few times a week via electric scooter. “It’s only a two-minute ride!”

He now walks. He also treats Deli Board like a treat. “Thanksgiving wouldn’t be special if it was every day, either.”

Over the years, Lou Seal has become as popular among San Francisco baseball fans as Deli Board has among San Francisco sandwich fans. Both are loyal and cult-y and lean heavily male, judging from their recent respective daytime crowds. (Baseball I get. But sandwiches?)

“My first few years as Lou Seal, I’d get a lot of ‘Hey, sewer rat! Down in front!’” says Joel, who has yet to miss a single game — after some 1,700 games. With his humorous hip tosses, hip-hop moves and free hugs, he has built the character into one of the nation’s most beloved mascots, complete with a Hulu documentary series (“Behind the Mask, Season 2”) to its name.

“Sometimes I’ll get heckled by a baseball purist who doesn’t want the frills and just wants to watch the game. I get it, but I’m, like, ‘Sorry, man, go back in time.’” Now, says Joel, all he has to do is saunter into a section with his pot belly and raise his paws (flippers?) over his head “and the crowd just erupts,” he says. “It’s crazy.”

Lou Seal makes it look easy. But Joel works hard. Fans ask him to officiate their weddings and perform at tech parties and autograph their Lou Seal tattoos. He does upwards of 300 outside events a year. That’s in addition to his “offseason” gig as the leader of the Golden State Warriors’ Hoop Troop. No seal costume required, just general crowd-pumping and T-shirt-launching. Only thing is, he says: “Now that the Warriors are always in the NBA finals, I don’t really have an off-season.”

Adam works hard, too. He’s a no-frills purist himself, the sole owner, sans investors, of a bare-bones, 20-seat sandwich counter dedicated to handcrafted meats he can barely afford to sell in this city anymore. Still. “I will not compromise on quality,” says Adam. “What am I going to do? Bring in some s—y turkey just so I can sell a $9 sandwich?”

Spend a lunch hour chatting and chowing with Adam and Joel on Folsom Street, and you start to see the sandwich as something bigger than itself. (If that’s even possible at Deli Board.)

Nor to the neighborhood. In this stretch of SoMa, Deli Board is a means of connection, an unofficial community center in a disparate community. And in his own way, Adam, like Lou Seal, is the character who brings everyone together. He just talks more than a mascot.

His longtime refrigerator repairman, Falla, comes by in uniform to kibbitz, even though everything’s running fine. Lou Seal gave him and his family a special high-five at the game the other night. A homeless man walks in. “Hey, Yoni. How’s it going? You want a root beer and chips?” asks Adam. On his way to grab them, he stops to shake hands with a well-coiffed, TV-handsome man. Justin Fichelson from Bravo’s “Million Dollar Listing.”

Deli Board gets its share of local notables. Michael Krasny likes the corned beef with nothing but his native Cleveland mustard on a French roll. Before moving to Sacramento, Gavin Newsom’s go-to was the Ron (roast beef with coleslaw and avocado). Late mayor Ed Lee was a regular (pastrami with cheese, light mayo, light sauce), as are a disproportionate number of public defenders and judges, given Deli Board’s proximity to 850 Bryant. There’s an artist-neighbor the staff nicknamed “Brian the Babe,” who eats lunch here every day, alternating between the Cobb salad (yes, Deli Board does salads) and the turkey-bacon-avocado-stuffed Armando, always saving the second half for supper.

He doesn’t make his off-menu buffalo-style wings for just anyone. And Joel doesn’t spontaneously drop by dressed as Lou Seal for just anyone, either.

“I’m a sandwich guy,” says Joel. A Deli Board guy. “I won’t eat some crappy sandwich somewhere else.” Neither will he, or Adam, eat hot dogs with mayo. “It’s disgusting!” they declare in unison.

They’re like two burgers in a bun, meat-lovers talking stadium mustards and Bumgarner and middle age, marveling over how time flies. How they never thought they’d still be doing what they’re doing. How they’d never want to do anything else.

It’s easy to envision them 20 years from now, sitting here at Deli Board doing the same, reflecting on careers spent less on making money, and more on making people happy, be it through baseball or corned beef.

Deli Board’s menu includes stalwarts like the Zoe, an ex-girlfriend; the Goldie, his aunt; and the D. Rubin, his friend and “a great play on the Reuben.” And for a brief moment in time, the Lou Seal.

A lifelong Cleveland Indians fan, Adam thought of it as his own little ode to his adopted team. “I’ll never name a sandwich after a ballplayer,” says Adam. “They just get traded.” Not Lou Seal.

Is there any greater honor for a Sandwich Guy to have a sandwich named after him?

“If he hadn’t named a sandwich after me …” says Joel wistfully. “We would have never met.”

No matter that the sandwich is no longer on the menu.

As will, perhaps, the Giants. If Lou Seal eats enough Leroy Browns.