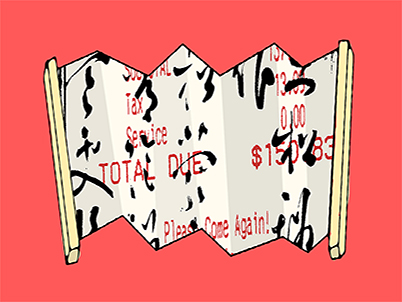 The Price of Poetry

Published by Lucky Peach, performed at La Cocina’s “Voices from the Kitchen”

On Clay Street, in San Francisco’s Chinatown, next to Adult Media Exotica and across from a Chinese community center, there is a restaurant called Jai Yun, which is closed more often than it’s open.

Accolades and Zagat stickers dating back to 2006 cover a door that remains locked behind an accordion metal gate—unless Chef Nei Chia Ji has a reservation, which is a rarity. Diners come in, mostly via OpenTable, sporadically and at a sprinkle: a table for two on a Thursday night, perhaps; a party of five on a Friday. Christmas Day last year was a biggie: thirty tables booked, but a bunch were no-shows. And the ones who did arrive suffered horrible service, admits Nei, who speaks no English aside from “What Night?” “What Time?” and “How Many People?”

The language barrier is his biggest problem, says the five-foot, sixty-year-old chef from Nanjing, through a translator. “It’s difficult to call someone if my refrigerator breaks. It’s difficult to confirm reservations. It’s difficult to communicate my philosophy to customers, or to helpers.” So he often does it all himself: the farmers’ market shopping, the prepping, the cooking, the toilet scrubbing, the dishwashing. The first time I ate there, a Friday night last fall, he also did the serving. We were the only customers in the place—which would be cozy if Jai Yun was the size of, say, a walk-in closet. But it’s not. It’s a two-floor, brightly lit palace, humming with the sound of that refrigerator and festooned with fake flowers and red tassels and paper dragons. At capacity, it seats 160.

When he lived in China, Nei had been a government manager. He quit for cooking school in the ’80s, when the doors to the world were just beginning to open. People were used to filling up with fatty deep-fried foods like pig intestines, he says. Nutritious, seasonal, beautiful fare was a foreign concept—and became the foundation of his cooking. He was well read and had “advanced ideas about the quality of life,” he says. He didn’t like the MSG-saturated dishes in restaurants, and knew he could do better. He opened a small restaurant in Nanjing and had success serving healthy dishes like a tofu-beansprout-bamboo stew and shinjin cai, a stir fry of leafy greens, lotus roots, and mushrooms, so he expanded to a two-hundred-seat space. He had many Chinese-American regulars, one of whom said he would sponsor Nei to come to the States to pursue his dream of opening a fine-dining, ingredient-driven, “healthy” Chinese restaurant there. In 1995, Nei landed at a Marriott in Maryland, flipping burgers—not what he had in mind.

He returned to China. A friend encouraged him to try again—this time in San Francisco, where he might have more luck, given its significant Asian population. Like most, Nei was after the American Dream—and a better future for his son—but he also hoped to change the Western bias toward Chinese immigrants. “That we’re all about getting rich quick,” he says, “haggling over every penny.” In 1999, after cooking for a couple of local Chinese restaurants, he opened his own. Jai Yun’s original Pacific Avenue location was more intimate—just thirty seats, a true hole in the wall. “In a good way,” says Charles Phan, a chef who would come in frequently. Business was solid, but Nei thought he should be closer to the financial district. Not because of the big expense budgets, he says, but because of people’s education levels and open-mindedness. And their willingness to try food like his—inspired.

Jai Yun’s seasonal prix-fixe menu is based on Nei’s personal interpretations of ancient Chinese poems. Each menu set reflects a different poem, he explains. And each line is a different dish, which results in a parade of nine to eighteen plates that collectively tell a story. One, he says, that only his well-educated, culturally Chinese customers can understand. Everyone else just eats. (And ponders the quality of the food versus the steep prices, which start at $98 per person, for two, and can go up to $168 per person or higher for dishes with special ingredients.)

On my second visit, thanks to the translator, I begin to appreciate this man and his menu. Our first course is a gorgeous palette of twelve tiny dishes, each a different taste: bitter melon, spicy cabbage, sweet tofu salad. “Like life,” Nei says. Then the abalone arrives. A pile of fleshy, snow-white meat draped in sautéed egg whites; it’s soft and subtle, a little salty, and as feminine as a food could be. Above it is a sprig of parsley and a cherry. The dish has no official name, he says; it’s a young girl staring up at the moon through at tree. It represents purity. I take another look at the halved maraschino cherry perched above the parsley, and think, Totally. By the time the “Dancing Ghosts” arrives—a tangle of spicy, flash-fried enoki mushrooms—I get it: I’m eating Nei’s poem. “Do you know any American poems I could cook?” he asks. “Maybe then more people could comprehend.”

He’s had a few “helpers” in the past that spoke English and Mandarin and promoted his business. 2009 was a good year—steady reservations, good press—until Nei had to let his helper go for knowingly overcharging customers. Since then, it’s been very hard. A couple of front-house folks have come and go, including a professional Mandarin-English translator Nei once hired, thinking that might solve the problem. “But even he couldn’t understand me and my poetry,” says Nei. Few people do—not even Nei’s son, who financially supports him and his restaurant, but doesn’t necessarily ascribe to his vision.

“Profit is not my priority,” Nei says. “No one understands that, especially the younger Chinese generations.” So why such high prices? “Because my food deserves it. Like Gary Danko,” he says.  Ingredient costs are high, he says, although labor costs are minimal—it’s all him, save for the servers he pays to have on call for when reservations come in. Ultimately, though, Nei is able to continue to operate Jai Yun because of his son, who helps cover the (below-market) rent. Nei busts out a photograph of him and Danko on which the celebrity chef has scrawled, “Amazing Meal!” in black Sharpie. Danko offered him a job once, Nei tells me. Charles Phan has, too. “They said, ‘Come cook for me, you won’t have to spend a penny.’”

“But that is not my dream,” he says, sitting in his empty restaurant on a Wednesday at six o’clock. He slips on his glasses and flips through a three-ring binder crammed with ideas and banquet menus and poems he’s penned on page after page of loose-leaf paper.

“Have you heard the term ‘starving artist?’” I ask. Nei stares blankly until the translator explains. “Yes! Yes!” Nei nods frantically, cheeks flushed. He flashes the first real smile I’ve seen and gives me an enthusiastic thumbs up.