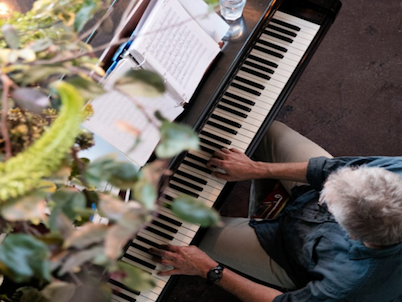 The Piano Man of Zuni Cafe

The six o’clock sun streams through the floor-to-ceiling windows, illuminating the long copper-topped bar and an oddity for a Thursday evening or any evening, really, at Zuni Café: a room full of empty tables.

Bob Carrau doesn’t seem to notice. He strolls in with his embroidered seat cushion under one arm and a tattered yellow Mexican market bag slung over the other, like he has twice a week, every week, for the last nine years. He nods hello to the hosts, whose names, he admits, he really should know by now, and heads downstairs, to Zuni’s underworld—where dishes are washed and ties are ironed and the staff shares big bowls of pasta—and grabs a small ceramic Mexican plate from his cubby: his tip plate.

Bob’s not hungry. He had a couple of carrots before he arrived, but otherwise, he never eats before he plays. He rarely sticks around to eat afterward either, unless friends come in. Doesn’t matter what plates pass by: the thick slices of levain with sea salt-sprinkled butter; the Caesar of all Caesars. Not even Zuni’s famed roasted chicken, nestled in warm bread salad, tempts. (As much as he likes it, he likes his partner Tony’s roast chicken more.)

Somehow, unlike everyone else in the restaurant, his mind isn’t on the food. It’s on his music.

For the next three hours, beneath “a flower arrangement Liberace could die for,” he’ll play a polished K. Kawai grand piano that’s stood there almost as long as the restaurant itself.

First, Bob opens his wallet. “Don’t tell anyone I’m doing this,” he says, and proceeds to do what everyone knows everyone with a tip jar—in Bob’s case, a tip plate—does: and feeds himself a five dollar bill.

Bob never wanted to play for tips! He wasn’t even sure he wanted to play for people. On an average night, he might pull in thirty bucks; fifty on a good night. Tonight—Game 1 of the NBA Finals for the Golden State Warriors—it’s so far looking slow.

“I’ve learned, how I play has no bearing on how much people tip,” he says laughing. “Depends on the night, their mood…” He could make a million mistakes, he says, and some big hitter might still slip him a twenty. Bob appreciates every penny, but he doesn’t play for the money. He can barely believe Zuni pays him at all.

“I guess that means I’m a professional?” He half-balks/half-marvels at the thought as he pulls what looks like forty pounds of spiral-bound jazz fake books out of his bag, some dating back decades.

From fifth grade through age fifty, playing piano was just a hobby for Bob. Something he did on his own, rarely if ever singing along, and always without fanfare. If there happened to be a piano at a friend’s house, he’d sneak off while everyone was making dinner. A performer, he was not, he promises. “I’d just see a piano and want to know what it would sound like.”

But the thing is: his friends thought it sounded pretty good.

And his friends owned restaurants. Like Alice Waters (whose speeches and books he sometimes cowrites, including her latest, Fanny in France, which comes out this fall.) And Gilbert Pilgram of Zuni, which had a piano in need of a player. So one rainy Monday afternoon in 2007, he invited Bob to come in and play a few tunes while he and Judy Rodgers worked on the books.

He doesn’t remember what he played, just how he felt playing. The acoustics were incredible. He gazes from the polished cement floors to the mile-high cathedral-like ceilings. “This room is just beautiful,” he says. “Especially when no one is in it.”

Tonight it’s just a few fellow regulars: a gray-haired woman in a trench coat sitting by herself. Another who gives him what he calls “the Princess Di wave” as she passes the piano. A bearded man in a blazer stops to give him a hearty hug, marveling at having his pick of tables. “Who knew the Zuni crowd were such Warriors fans?”

Bob agrees. The Zuni crowd used to be “gayer,” he says, chatting as his fingers flutter effortlessly over the keys to “The Caissons Go Rolling Along,” a WWII tune he sneaks in every time. “The first night I ever played at Zuni, the U.S. had just sent more troops to Iraq, or somewhere, and I was just sitting at the piano, looking around the room, realizing how insulated we were from the world,” he says. “It’s my own silly little protest.”

Bob was a regular back when Zuni was a sliver of an American-Mexican place. Before Judy Rogers took over in 1987, installed the brick oven, expanded, and turned Zuni Café into the iconic restaurant it is today.

There was always a piano, he recalls. “This one old guy from the Fillmore would play the blues and I’d just stare at his fingers, at how fast they could move.” Like I now sit and stare at his.

“Zuni was the kind of place you’d come to cruise,” Bob reminisced. In his thirties, he’d drop by around 11 p.m., hoping to maybe meet someone. “I never did,” he says laughing. “But it felt like you could.”

Now a graying fifty-eight year old in a twenty-year relationship, Bob’s certainly not here to meet men. He’s here to play. And people watch. “I’m a voyeur,” he says. “This gig allows me to be out in public, without, you know, really going out.” Originally a gofer-turned-screenwriter for Lucasfilm (he actually wrote his first script with George), he can’t help but watch the well-coiffed gaggles slurping Fanny Bays and sipping fresh lime margaritas and wonder who they are, where they’ve been, why they’re here.

Hardly, says Gilbert, who appreciates the warmth and intimacy that live music adds to a restaurant, a rarity in this age of piped-in playlists. “What I love about Bob is he’s not your typical lounge player. You’ll never catch him playing “New York, New York.” He has standards.”

Once, though, Michael Tilson Thomas cruised through and gave him a thumbs-up. That felt good. A few years ago, Hillary Clinton came in, with a friend of his who asked her if she had any requests. She suggested “Moon River,” then ordered a Manhattan. But her friend urged her to try Zuni’s margarita. “‘Oh, I’ll just have both,’ she said!” Bob recounts. “Wait, maybe don’t print that. She’s trying to get elected president of the United States!” (Oh c’mon, if Gerald Ford liked his lunchtime martinis and Teddy Roosevelt drank mint juleps and even President Obama puts back an occasional pint, there’s no harm in Hillary Clinton double-fisting a couple of cocktails is there?)

Bob flips the pages of his fake book. He has no premeditated lineup. “I let the room tell me what to play,” he says, and launches into a riff of “Have You Met Miss Jones?”

Time for his break.

He rises and wanders out the side door, onto Market Street. “This stretch used to be scarier, all addicts and homeless,” he says, strolling a few doors down to his “office,” an entrance to a mattress shop and a respite from San Francisco’s wintry summer wind. He points to a shiny tech bus and the sleek new sushi spot across the street. A woman jogs by, as does a man pushing a baby stroller, then two matching hoodies. “You never used to see any of these people here—or if you did, they were lost.”

An almost forty-year-old restaurant with a wall of windows exposes more than just the waning evening light. Somehow, though, because this is Zuni, the changing city remains beyond the glass.

The clock strikes nine and a few Warriors’ revelers start to trickle in. Bob packs up his music, closes the lid on his borrowed piano, and slips the sole fiver back into his wallet. Time to head home. Perhaps Tony’s roasted a chicken.