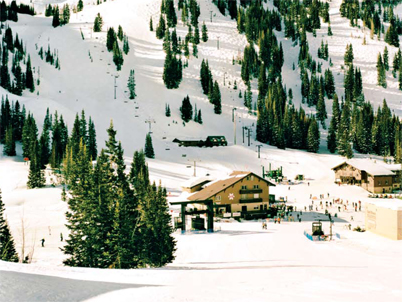 “I had such a crush on him when I was a kid,” says my friend Didi Linburn, pigtails peeking out from beneath her pink ski helmet rather than the wool pompom hat she wore as a kid. I peer into the tiny ski shop at the Alta Peruvian Lodge and catch a glimpse of a cute guy in glasses behind the counter. “No idea how old he is,” she says, “but I’ve seen him here every winter since I was 15.”

Twenty-two years later, and Didi and her teenage crush are still here? I’ve yet to even take a run down the powder white slopes, but I already sense that Alta, Utah, just might be as special as everyone says it is — including my self-proclaimed “Altaholic” husband.

Tired of not getting an invite to his annual “guys’ trip,” and admittedly jealous about the other love in his life, I decided to tagalong on Didi’s annual father-daughter jaunt. And finally experience for myself this almighty Alta–with just seven lifts (and not much else) spread across 2,200 acres of heart-pumping hikes and narrow chutes, chest-deep powder, and total lack of pretension.

Skis slung over our shoulders, we walk out the weathered wooden door of the lodge, taking in a deep breath of fresh — albeit thin — mountain air. I’m instantly happy to be here at 10,550 feet, on leased U.S. Forest Service land at the resolutely un-corporate resort, where faded one-pieces outnumber Bogner jackets, chairlifts seat at most four across, and five no-frills lodges, scattered up Little Cottonwood Canyon, sleep 1,200 skiers, tops. Skiers. Not shoppers. Not ski bunnies. And, above all, not snowboarders. As the mountain motto goes, Alta is for skiers.

During my stay, I see it flaunted on banners, baseball caps, bumper stickers. Alta is, after all, one of just three resorts left in the country that ban boarders, since Taos Ski Valley opened its slopes to all in March. Geared up, Didi, her dad, and I creep along in a bar-less triple chair, surrounded by nothing save blue sky and the towering peaks of the Wasatch Range. “Same as it was in the ’60s,”says Geoff Linburn, who first came to Alta from California in search of what he’d heard was the best snow in the West.

Back then, lift tickets cost $8, and there were only five slowly moving chairlifts, but apart from building a couple more and raising ticket prices to a reasonable $64, Alta remains Alta. Didi’s dad smiles. “Still the best snow in the West.” A whopping 500 inches annually of light-as-a-feather powder — and I can’t wait to try it. But that will take some effort.

Without a convenient tram to Alta’s best terrain, the limited number of skiers allowed uphill work for every turn with an almost perverse pleasure. As a typically lazy, play-it-safe sort of skier, I’m intimidated.

We hop off the Sugarloaf chair and join the parade of people inching their way, single file, up, up, up, and gliding precariously, over, over, over, only to climb again. Is this really worth it? I think to myself, sweating in the snow. I contemplate taking off my skis, but then I look up. “Aw, it’s a bootpacker!” one guy yells at another fellow who’s stomping with his boards on his shoulders rather than suffering the steep sidestep with everyone else. I press on, inspired by the unspoken camaraderie on the traverse toward Devil’s Castle — a wide-open bowl and depository of powder — and the shared anticipation among strangers bound by a passion for Alta’s almost guaranteed fresh tracks.

Still, exhausted — okay, panting really — I stop and watch as the hard-core hikers keep stomping; my heart is pounding. I look downhill at the untouched powder and decide I’ve had enough hiking. Time to ski.

After a blissful day on the slopes, the return to the Peruvian Lodge is a comedown. The guest rooms remind me of my college dorm. There are shared bathrooms and a Ping-Pong table but no TVs. Still, the Peruvian, like all of Alta’s lodges, has a 75 percent return rate.

I’m honestly baffled, but by the end of dinner — a slippers-acceptable, family-style affair, where a wine collector wearing turquoise sweatpants shares rare bottles he brought from home and our table swaps stories like old friends — I start to understand. But, unlike most of the longtime guests, who remain fiercely loyal to “their” lodge, never venturing steps away to check out another, I’m curious and leave Didi a few nights later for Alta’s Rustler Lodge, where things are a tad more civilized (read: pricey).

Now I have a television and my own bathroom, and reservations are taken for the window-walled dining room, where the next morning, I overhear a waiter bellow “Welcome back!” to guest Roger Urban, who has been staying here since his bachelor days. He and his wife — looking very ’80s (like the lodge) in their matching rainbow-striped rugbys — fuel up at the breakfast buffet, while their teenage daughter, Alexandra, heads out for a lesson with the same instructor she’s always had.

Meanwhile, I finish my eggs alone and realize that I miss the chaos of the Peruvian’s hostel-like atmosphere. I slip on my skis and hop the rope tow to meet Didi for another day on the slopes.

From the chatter around the lift line, it’s clear that it’s not just the powder that draws people to Alta — it’s also the people themselves. Old college buddies, moms and sons, widows who used to come with their husbands … everyone returns without question. Likewise, all the locals I meet say they’d intended to come out for a season and do the ski-bum thing. But before they knew it, 10, 20, 30 years had passed — and they’re still here. “Alta just swallows you up,” says Craig Dillon, Didi’s ski shop crush, who, it turns out, is 41 and has lived here half his life.

And so, because people never leave Alta, it’s only natural that they grow old here. Not in the typical, canasta-by-the-pool way of growing old. Rather, Alta is like a real-life Cocoon, where the mountain is the fountain of youth. Senior passes start at age 80.Didi and I return to the Sugarloaf chair and ride up with an86-year-old couple. “Skiing is only getting easier!” the husband says, beaming. “Free tickets!” says his wife. Inspired, I make a mental note to be just like them in 50 years. As we climb, once again, toward Devil’s Castle, a father whizzes by with a tiny skier bouncing on his shoulders. “Daddy? Are we at Devil’s Castle yet?” He hikes as far as possible, plops his daughter in knee-deep powder, and off she goes: a 4-year-old making fresh tracks. I watch, dumbfounded.

And determined. I decide to hike out as far as I can. I want those fresh tracks, and this time I’m willing to work for them. Heart racing, legs aching, I reach the end of the ridge. I rest for a moment and then dip in. Flying solo through feet of untouched powder, carving near-perfect turns, snow spraying like the pros, I realize that I’m floating. This is it. This is why I’ve come to Alta.

Later that evening, lounging around the Peruvian lobby after dinner — with Scrabble, impromptu sing-alongs, nothing to face tomorrow but more fresh snow — I get the feeling I’m continuing a tradition at risk of being lost forever to the fast-paced, froufrou world beyond Little Cottonwood Canyon. “Everything changes in your life … so much,” reflects Leslie Johnson, who’s been coming here every winter since 1982. “Friends move on … my family’s homes have come and gone … but Alta, Alta never changes.”

I get it. I’m hooked. Another Altaholic is born.