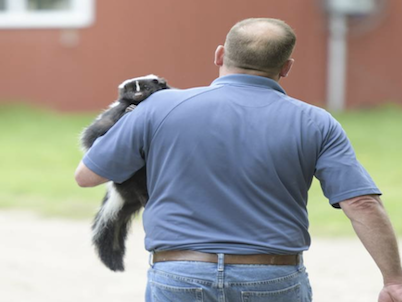 Taming the Beast in Your Basement

“I get lot of calls about animals in pools,” said Ray Hartley. “Squirrels in pools. Skunks in pools. Usually I tell people, ‘You don’t need me. You’ve got a skimmer, just gently scoop it up!’ ” Recently, though, a woman rang about a deer in her pool.

“That was a first,” said Mr. Hartley, owner of Intrepid Wildlife Services in Westchester County, N.Y. His tagline: “Your castle shouldn’t be a zoo.”

We can deal with pesky seagulls on the beach. But when it comes to raccoons in our chimney, chipmunks in our yard and bats in our bedroom, we human beings are helpless, especially in this era of Uber-Insta-On-Demand everything. Why would we handle a snake in our garage when we don’t even hand-select our own groceries?

Mr. Hartley is one of a growing breed of professional critter gitters—also known as nuisance-wildlife-control operators. They are a fearless group of (mostly) men willing to rescue us from wildlife that has gotten in our way. (Or is it vice versa?)

“It blows my mind what people pay me to do,” said Mr. Hartley.

And lately people have been paying for woodchucks—starting at $400 for up to four visits. Woodchucks, or groundhogs, tear up the lawn, burrow tunnels, erode the foundation and eat away at the electrical. “I jumped, like, 250% on woodchucks!” he said. “Been jamming on squirrels, too.”

And last summer—every summer—bats, 24/7. Bats in toasters. Bats in washing machines. “Bats and squirrels are my bread and buttah,” he said, joking.

He fields anywhere from 200 to 300 frantic calls a month,he said. Winter (mating skunks), spring (flying squirrels), summer (rabid bats) or fall (den-seeking raccoons), all you’ve got to do is call. Whether it’s two in the afternoon, or four in the morning—he’ll rush over in his Toyota Tundra Rock Warrior. And charge accordingly.

Mr. Hartley, 53, got his start snaring beaver and catching coyotes in the 1990s in rural New Hampshire—long before the industry had formal training and Facebook groups and national conferences. He was pretty much a lone wolf back then, self-taught, aided by a bimonthly magazine called Wildlife Control Technology and his buddy’s VHS: “Snaring Beaver Alive.”

“The farmers loved me,” he recalled.

They paid him in bushels of corn and bottles of maple syrup. But he didn’t love New Hampshire. “Too many do-it-yourselfers,” he said. “Business is way better in Westchester.” (Plus, people there pay cash.)

Business is booming, said many of the wildlife-control operators who attended last year’s Wildlife Expo in New Orleans, which had a record turnout and offered programs such as “Zoonotic Disease: What You Wish You Didn’t Have to Know” and infrared rat tours of downtown. The annual industry event is put on by the National Pest Management and the National Wildlife Control Operators associations.

“The industry has grown exponentially,” said Mike Tucker, 60, who has been chasing squirrels in Minneapolis for 40 years. He and Mr. Hartley stood on the second floor of Harrah’s New Orleans Hotel & Casino surrounded by furry replicas of rats and cans of Critter Ridder repellent.

“It’s urbanization,” explained Mr. Tucker, sporting a navy “Wildlife Removal Services” cap. “We’ve made it more hospitable for animals. Sleeping under a porch is cozier than sleeping under a rock. We put out our birdfeeders… We house them, we feed them, and then we complain about them!”

As city populations surge and developers push into previously uninhabited areas, humans and wildlife are interacting more. And more interaction means more conflict. “People are used to having a pool guy and a landscape guy, now they need a raccoon guy,” said Mr. Tucker.

As an industry veteran, Mr. Hartley led a conference session called, “Preparing for the Unexpected Jobs.” He showed a video of himself pulling a growling raccoon out of a client’s bathroom wall by (gloved) hand, then wrangling it into a steel Tomahawk Live Trap. “That’s how we do it, folks!” he said.

Escorting out uninvited guests is a big part of the gig, but so is sealing up entry points and installing devices such as chimney caps to prevent home invasions in the first place.

Educating clients is, too. “People call up all the time saying, ‘Oh my God. There’s a coyote in my backyard!’ ” said Mr. Hartley. “I’m like, ‘Yup, that’s nature. Call me if it gets aggressive.’”

Added Mr. Tucker: “Customers are clueless. A guy once demanded I find the squirrel eggs in his attic. He was from New Jersey. Not that that matters.”

Rates range, uh, wildly, depending on animal and location, urgency, severity and number of visits required. A middle-of-the-night bat call in Chappaqua might be $325; a midday squirrel call, minimum $485; a raccoon eviction in San Francisco, $140 for an inspection and $400 for Junio Costa—aka Mr. Raccoon—to, say, catch pole one feasting in your kitchen.

Most wildlife-control operators do it all—snakes, squirrels, skunks—but they often have a soft spot for certain animals. Keith Markun, owner of Beast Wildlife Solutions in St. Paul, Minn., likes working with birds and bats, and has a bat colony etched on his arms to prove it.

Jimmy Hunter, of Nashville, has seen an influx of armadillos. And Gregg Schumaker is all about skunks. He calls himself the Skunk Whisperer of Northern Michigan, where he removes some 200 a year from vacation homes and high-end hotels. He also has a skunk as a pet. His name is Tybalt, like the Shakespeare character, and he is allowed to sit on the couch.

“I like the smell of the spray,” Mr. Schumaker admitted. “A lot of people do.”

Newbie Dan Bailey, 24, with a degree in wildlife biology, handles a lot of snakes in New England. Once, he removed a 2-foot-long milk snake from a nail salon. “That was fun!” he said at the expo, beaming beside a stack of pigeon birth-control pamphlets.

It may take time for him to learn what Mr. Hartley and his peers confirmed after decades of house calls. What’s the craziest animal they’ve ever dealt with?

They replied in unison: “People.”

Rachel Levin is the author of “LOOK BIG: And Other Tips for Surviving Animal Encounters of All Kinds.”