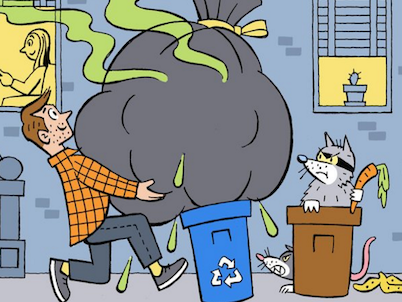 Taking out the Trash? That’s Still a Man’s Job

On a recent Monday night in San Francisco, as I lounged in the living room watching “The Marvelous Mrs. Maisel,” out of the corner of my eye I also watched my husband, Josh, march around our house as he does every Monday night, collecting pails and tying plastic bags.

Next, he dons his headlamp (which underscores: serious business), grabs his Leatherman and spends the next 15 minutes or so outside in the dark fending off raccoons and annihilating the latest crop of Amazon Primeboxes; cramming the week’s wine bottles and every last LaCroix can into the blue bin; dumping eggshells and avocado rinds and our kids’ abandoned crusts into the green compost bin; and bungee-ing the filled-to-the-brim black garbage bin. And then bu-bump-ing-bu-bump-ing the trio one by one, down the entryway to the curb. Eventually Josh returns, washes his hands, and joins me, cozy on the couch.

This is our weekly ritual. There’s no acknowledgment of the obvious inequity. No you-do-it-next-time admonishment. He accepts his role without a hint of bitterness. (In a way I do not when it comes to, say, driving car pool or coordinating play dates.) Every Monday around 9 p.m., I feel a tinge of guilt, except … not really.

Almost every woman I know who lives with a man shirks this chore. It’s as if all hard-won equality in the home is tossed on trash night. It may be the last bastion of accepted 1950s behavior. And in this case — and this case alone — women are fine with that.

As one friend pointed out: “Women deal with the rest of the garbage.”

For many, it’s the simple ick factor. “I don’t do trash juices,” said Gabriela Herman, 36, a photographer who lives with her husband and 17-month-old daughter in a brownstone in the Bedford-Stuyvesant neighborhood of Brooklyn.

“Ew, it’s the actual bins,” said Ashita Trika, 39, a senior product manager with an M.B.A. who lives in a single-family home in San Francisco with her three children and husband, Noble Athimattathil. “I have no idea what he does, I just know it gets done,” she said of the garbage procedure. “Sometimes I’ll see the empties on the curb — but I don’t bring them in or anything. Noble owns trash end to end. He takes the mental load and the physical load. It’s freeing.”

Mr. Athimattathil, 40, grew up in Yonkers, where he said his father always took out the trash, until he passed the job down. “My sister and I would both be sitting on the couch watching TV,” he recalled. “And my dad would always say: ‘Noble, take out the garbage.’ Why not my sister? She had two arms and two legs!”

Trash night in Portland is especially taxing, she said, because it occurs only once every other week. Moreover, the standard bin is half the size of the compost and recycling, which are picked up weekly. “It’s the liberal hippie thing. There must have been some kind of movement,” said Ms. Casey, who grew up in Chicago.

She added: “If we ever have extra space in our can it’s like Christmas! And we start running around the house looking for things to throw in.”

Rarely is “Who’s on Trash?” an actual discussion among couples. The division of labor just happens. But Deya Warren and her husband, Gus, likely talked about it, she said, if only because they were given a book before getting married called “The Hard Questions,” which offers discussion topics like: “Do we eat out a lot? Or a little?” “What kind of bed do we sleep on? A king size? A water bed?” (Water beds?)

“The whole idea was that you should talk about the little things because, over time, they inevitably become bigger things,” said Ms. Warren, a 39-year-old entrepreneur and mother of three in Bronxville, N.Y. “Trash beyond grosses me out. I know it’s a gender stereotype, but I don’t care. I’m the one with the drill! I’ve dismantled our broken dishwasher and put it back together! I’m confident enough in my defiance of traditional roles. Gus can take out the garbage.”

What about all the single ladies, that highly scrutinized cohort?

Sophie Galant, 24, a consultant, lives with female roommates in a San Francisco apartment and routinely passes the honor of trash duty to guy friends who come for dinner. “I always ask them to take it out on their way out,” she said. “It smells. And I don’t want it to drip on me.”

Laura Manzano, 26, who moved from her college dorm in Virginia to a three-unit building in the Bushwick section of Brooklyn, has never dealt with the trash. “Anthony does it all,” she said matter-of-factly, referring to her superintendent. “We don’t even tip him. Maybe I should start?” (Yes.)

Elizabeth Hand, 41, a stay-at-home mother in the Cobble Hill neighborhood of Brooklyn, long had a helpful neighbor. “This elderly Italian man named Augie who’d lived here forever,” she said. “He would just do it for us. I had no idea how much work it was, until he passed away. We miss him.”

Trash chutes in the hallways can make the task easier for apartment dwellers, though some still struggle. “Tom has a habit of taking the trash out from under the kitchen sink, tying the tall bag, then just leaving it on the floor, in the garbage can — but obviously unusable, now that it’s tied,” said Jenny Patt, a lawyer who lives in Peter Cooper Village in Manhattan, referring to her partner. “As though that counts for something.”

When quarters are close, there are often heated battles over bins, on whose property they should reside, and who lugs them out each week.

In a recent thread on Nextdoor, the regional social network, a man in the Carroll Gardens neighborhood of Brooklyn asked people to petition the city to change their collection time from morning rush hour to off-peak hours. This set off impassioned, paragraphs-long responses, including complaints over noise; comparisons to Europe; scorn at the offense of commuting by car; and the general sentiment that bags are more efficient than bins, and that the city’s metal trash cans of yore were barbaric.

(But are Manhattan’s Hefty mountains any better? Apparently people think so. Rats seem to like them as well.)

Recycling has added to the burden. “It’s insane how much cardboard we generate,” Ms. Herman said. “We get Amazon, like, daily. Fresh Direct, Blue Apron … We have a whole staging area! Sometimes, it’s stacked to the ceiling.” Some admit to such anxiety about box breakdown that they get packages sent to work.

Dawn Perry, 38, the food director at Real Simple magazine, is a self-proclaimed recycling Nazi. “I went to Boulder,” she said, referring to the eco-conscious college in Colorado. When Ms. Perry and her husband, Matt Duckor, moved to a garden apartment in Bedford-Stuyvesant, they started seeing some “crazy behavior in the trash bins,” she said. Like plastic where clearly only paper should be. (And don’t even get her started about the lack of curbside composting.)

“One day I semi-aggressively said to a neighbor: ‘Are you going to break that down?’” Ms. Perry said. Mr. Duckor furthermore printed (and laminated) diagramed recycling directions to post above the shared bins. He also mentioned a recent maggot issue. “All he had to say was ‘maggots,’” Ms. Perry said, “and people listened.”

Last year, Danielle Fennoy, 37, and her family moved from a 45-unit building in Prospect Heights, Brooklyn, to a triplex in Bedford-Stuyvesant. “It was the biggest wake-up call on the planet,” said Ms. Fennoy, the co-owner of Revamp Interior Design. “I thought: ‘Seriously? Now I’m the trash lady?’” An early riser, she would put out the bags before work, a method that avoided rodent, or human, invasion. “I’d be out there in my jammies, with my neighbors. That part was nice. The camaraderie. ‘Like, here we are … trash day, again.’”

Until one trash day, she had a revelation: “I woke up and said, ‘You know what? I’ve got enough on my plate.’” She told her husband to take over trash. “And he was, like, ‘O.K.’”

Lauren Gersick, 36, a college counselor in San Francisco who shares the chore with her wife, believes that garbage night’s gender divide isn’t so much about women eschewing heavy bins or leaky bags. It’s not about a fear of rats or raccoons, or some sort of contrarian feministic stance.

It’s about men’s desire to get out of the house, Ms. Gersick thinks; a sanctioned opportunity to step out, away from the children and the chaos, into the dark solitude of night.