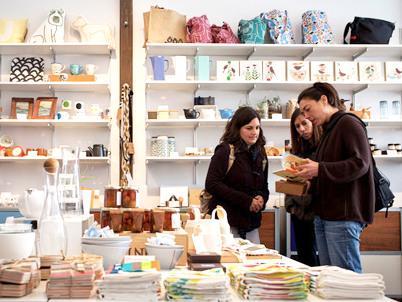 Years ago, realtors attempted to gussy up a gritty slice of the Western Addition area of San Francisco — home to wig shops, greasy diners and its fair share of crime — with a catchy acronym, NoPa, after its city-central location, north of the Panhandle. When the restaurant Nopa took over an abandoned Laundromat in 2006, the moniker started to catch on — and it now seems to have officially stuck. Rents are rising, retail options are evolving, and the neighborhood is expanding up, down and around Divisadero Street. Check-cashing joints have become trendy salons; landscaped parklets and do-it-yourself schools have cropped up; and artisanal pies and pizza are making a Popeyes look increasingly out of place. With plans for better bike lanes, a branch of the cult-favorite grocery and ice cream shop Bi-Rite coming this fall, and a Four Barrel cafe and “toast bar” (called the Mill) opening soon, NoPa is poised to become the next Mission — just leafier and more low-key.

All things DIY is the focus at this unassuming 800 square foot space. Spend a foggy summer evening learning how to stretch your own mozzarella, assemble a terrarium. build a quilt, or pickle, jam, and can. Single classes are around $40; reservations for private groups are available too.

The Fillmore may be the city’s most renowned live music venue, but the intimate “Indy” — with its 500-person capacity — has become one of its most popular, hosting everyone from big-name bands like Green Day to rising local singer-songwriters like Nicki Bluhm. There are also Monday movie nights, for free (the two-drink minimum sure beats a $6 bucket of popcorn.)

This art gallery-cum-curio collection moved here in April from its “no-man’s-land” location, a sales clerk said, barely looking up from his iPad. “NoPa is going to be way better for us.” On offer: reclaimed apothecary matchstick bottles, wooden puzzle serving platters and illustrated books and stationary from Little Otsu, a mini-version of the former Mission storefront.

San Francisco didn’t need another Neopolitan-style, cracker-thin-crust pizza place, but in 2010, Divisadero Street got a quality one, from the chef Sharon Ardiana. Highlights include the Calabrian “Moto,” topped with chile flakes and house-made sausage, and a newly opened (and heated) garden patio. (Expect a wait.)

A couple of surfers-skaters (and self-proclaimed partiers) with a thing for screen-printing opened this flagship apparel store and studio in March. Their Golden Gate Bridge “San Franpsycho” logo is already ubiquitous — before long, it may become the new go-to tourist T-shirt choice.