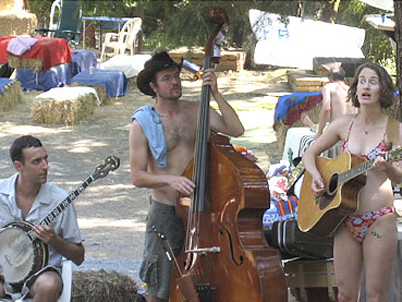 Soup with Everything: A Freaky All-American Party in Northern California

Where is this place? We tilted the handmade map every which way, reread the directions a fourth time and made yet another U-turn on a gorgeous dirt road lined with craggy oaks and broken fences. We’d driven four hours from San Francisco into the golden hills of Northern California with a sack of jalapeño peppers, and were nervous we wouldn’t make it before the welcome gate closed.

For years, I’d been hearing about Soup — a five-day retreat from the doldrums of daily life at a 400-acre homestead, off the grid and blissfully in the middle of nowhere. Inspired by the fable of the stone soup, in which a traveler unites a hungry village so that it can feed itself, the Soup celebration gathers 250 people, by invitation only, who come bearing organic vegetables (and herbs), as well as creativity, costumes, consciousness-raising conversation and extraordinary musical talent — to commune in honor of, well, community.

What began in 1994 as a hippie-pagan outgrowth of the Grateful Dead tour has evolved into a family-friendly feel-good festival of eco-entrepreneurs and nonprofit executives, lawyers and doctors, Pilates teachers, politicos — and, at last count, 45 kids, happy to be dragged along to their parents’ party. Eighty-dollar passes are as hard to score as Willy Wonka’s golden tickets, and all proceeds are donated to a local charity.

Last year, two recycled-paper tickets depicting smiley pink Buddhas arrived in the mail, inviting my boyfriend and me to “Lucky Soup 13.” As a buttoned-up Boston native, I’d always decided Soup was not my thing; but, for a second, I felt as if I’d won the lottery. Then I remembered a college friend: “I was totally into the massage circle,” he had said, “until this big, shirtless, hairy guy squeezed in front of me. It was hot; he was sweaty. It wasn’t pretty.”

We rolled in at dusk to a sea of Westfalia campers, Subarus plastered in anti-Bush bumper stickers, biodiesel Mercedeses and a few shiny new BMWs.

As if sensing our unease, our sole Soupster friend materialized, with a woman wearing angel wings. “Where were you guys?” he asked. “You just missed the Midsummer’s Eve wine tasting in the garden.” I pictured pink fairies and men in loincloths flitting about. I was bummed. Wine would have been a good start.

Set up like a sukkah was the welcome gate, or “luck activation portal,” a metal structure with hanging hula hoops covered in multicolored cloth. “Leave your troubles behind,” the sign said. As I stepped through, a gorgeous woman dressed in a flowing, all-red “I Dream of Jeannie” outfit appeared.

“Spin the wheel and select your tribe!” Jeannie instructed. Four of clubs. My boyfriend got seven of diamonds. “You’ll be separated during tribe time,” she advised. Tribe time?

We set up above the pond, our neighbors just inches away. A dinner bell rang. We lined up for a locally grown organic veggie meal and filled up with Dragon’s Drool: fresh-filtered water that drips from a stone dragon’s mouth. We were encouraged to sit anywhere, per the pre-Soup e-mail message: “Cliquey can be icky. … We’re all in the same broth.” We grabbed a seat next to the one guy we knew.

As I was scraping my plate into the compost, yet another glowing woman in wings tossed glitter on my face. Showtime.

We shared a hay bale with a psychiatrist from New York. “I try to come to Soup every year,” he said. “It’s that good — to the last drop. Way better than Burning Man.”

The entertainment began. A pair of newbies performed a hilarious skit about getting lost, just like us. A Soup veteran warned the attentive audience against FOMO (“fear of missing out,” since there’s so much to do at Soup). And then a familiar-looking folk singer walked onto the tiny stage: Kris Delmhorst. “No way!” I said to my boyfriend. As her soulful, carefree voice filled the starry sky, there was nowhere else I would rather have been.

A series of Bay Area-based bands played: JP*Orbit, Hot Buttered Rum, New Monsoon. People poured onto the hay-strewn dance floor. I looked up at the hot tubs perched on a hill and saw a gaggle of naked folks rocking out. Two descended to the floor to slow-dance. One guy in a skirt twirled wildly in front of the stage.

Morning dawned with fair-trade coffee, fresh fruit and announcements. Up jumped a barefooted woman: “At 1 p.m. in the lounge, I’ll be holding a playshop on alternative menstrual products.’” (I skipped it but learned later she was talking about an environmentally safe natural gum rubber cup called the Keeper.) “Two o’clock under that tree,” said a skinny guy in glasses, “I’ll be discussing a loophole in the U.S. tax system. You don’t have to pay the military portion.”

“Not true!” a lawyer yelled from the lawn.

A 7-year-old named Rose was offering a fun one: “Yummy Smoothies You Can Make.”

“Let’s hit it,” my boyfriend said.

It was too hot and sticky to take advantage of the massage tent. Still, all the tables were occupied. The pond was filled with float tubes and frolicking naked bodies. I wallowed like a pig in the mud, but the water was too warm, so I opted for the outdoor shower instead. Standing under a cold stream, trying to maintain eye contact with a six-foot male model, I thought about my summer camp days, when I refused to shower with two other 10-year-old girls.

Over at “Noodles,” the 12-and-under Soupster set was captivated by the EarthCapades, a husband-and-wife juggling team clad in rainbow-colored leotards and singing about how to save the planet. After dark, we were equally captivated when they transformed into buck-naked, back-bending flame-throwers.

Saturday night, everyone dressed in their ’80s best for the junior high dance, under our hand-painted stars. There was a photo collage of Soupsters from their awkward years; there was spin the bottle, too. I helped myself to a cup of spiked punch, bopped to “Borderline,” and lo and behold, my boyfriend was break-dancing on stage.

The true meat of every Soup is the Ritual. At Soup 13, it was a silent walk in the woods. After being blessed with burning sage, all 250 of us followed a belly-dancing Princeton grad, Pied Piper-style, along a winding path. A lovely stroll, but the point was lost on me.

Still, Soup doesn’t really end when the party does — it continues all year in various forms, with moonlight hikes and music jams, progressive potlucks and political campaigning. Soup is larger than the limited number invited to the party, bound only by the Ladle listserv and a feeling of family.

Back at camp, drums beat. The sun began its descent, casting that lazy late-day glow across the lawn. A crew of cooks had already begun chopping, grilling and stirring. A ginormous grate was covered in yellow peppers and Yukon gold potatoes, purple eggplant and corn on the cob, zucchini, squash, Swiss chard.

The pot was just like the one I imagined in the fable. It simmered for hours, manned by multiple stirrers, until finally the Soup was served. I looked around my bowl for our jalapeños. “Sorry,” one of the cooks said. “Too spicy for the kids.” The Soup was tamer than I’d thought.

The next day, I sat on the grass, listening to a speaker from the nonprofit organization Challenge Day, the beneficiary of last summer’s Soup. As he talked about his own isolation and his commitment to stopping gang violence by helping teenagers connect with one another, I was moved to tears.

In just a few short days, I’d become a Soupster — at least enough of one to return for Soup 14, which began on Wednesday and continues through this weekend.

“Part-community celebration, part-freaky summer camp, part-grassroots fundraiser, part-private party, part-Utopia,” wrote David Minkow, one of the founders of Soup, in a later e-mail message to the Ladle listserv. “Whatever it is, we’re lucky to experience it.”

Agreed. There’s something to this soupy subculture and the community it’s created; a physical, tangible community — the kind you’ll never find surfing MySpace.