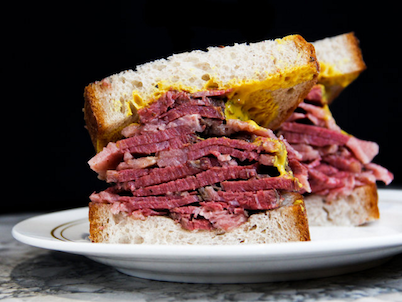 Pastrami in Hong Kong, But No Dr. Brown’s

You know you’re not in New York anymore when a restaurant website has a page with the line “What is a delicatessen?” up top.

Manhattan may be losing one of its top pastrami palaces when the Carnegie Deli closes, but Hong Kong recently welcomed Morty’s, which opened in April in the bustling Central district, on the ground floor of Jardine House. The office tower is home to mostly lawyers, financiers and dentists, a clientele that in New York would probably be familiar with lox, bagels, smoked meats and the like. But this is Asia.

A Chinese businessman, standing in a long weekday lunch line recently, said he had not visited New York but had become a regular at Morty’s. He ordered the Reuben. Why? He had seen one on “Seinfeld” and thought it looked good.

Even 8,000 miles and an ocean away from Manhattan, it is good, if flanked by a flaccid pickle and a tad light on the Thousand Island dressing. But the pastrami Reuben (heretically, not stuffed with corned beef) is tender, sweet and smoky, with the perfect hint of pepper. It’s hand-sliced — not too thick, not too thin — and served on soft house-baked rye, with Swiss and sauerkraut.

The space is slim and sleek, perhaps a little too sleek to feel like a true deli; the ketchup and mustard squeeze bottles sit on marble counters, and the menu lacks staples like egg creams and chopped liver. (No Dr. Brown’s either, but there is a full bar.)

The founder, Gerald Li, is Chinese, but he grew up in Toronto eating Reubens regularly and wanted to bring deli culture to Hong Kong. He teamed up with his friend Brian Tock, grandson of Morty Tock, who immigrated in 1920 from Europe to New York, where he learned to smoke meat. Morty’s pastrami recipe lives on at his Hong Kong namesake, where a 45-day aging process calls for 20 days of curing and 24 hours of cooking, followed by smoking with American hickory. (Morty’s smokes its own chicken, turkey and duck, too.) To help ease the wait, strangers — Australians, Britons, Chinese, Filipinos — are often seated in booths together.

At this particular lunch there was not a New Yorker in sight, though according to our server, “they seem to like it O.K.” Their only complaint? Even the large sandwich isn’t big enough.