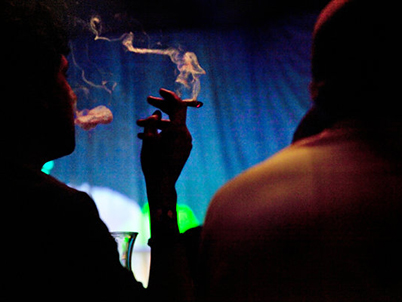 Pass the Pork Belly, and the Joint

SAN FRANCISCO — On a dark corner here in the Mission District on March 31, the doors opened at 7 p.m. for an under-the-radar pop-up dinner. Stationed at the entrance was a man who meticulously carded each of the 60 guests, even two with white hair.

Inside the bar, long tables were set with wineglasses, place cards and something you don’t see much of anymore: ashtrays.

A university professor who arrived a little late slid into his seat, saying, “You know, you can smell this place from across the street.”

The dinner was the third iteration of the Luck Pot, a series of get-togethers intended for adult users of marijuana, sponsored in part by a rotating group of medical-cannabis companies based in Northern California. To get in, guests have to present a state-authorized medical-marijuana identification card, made possible by a program established in 1996 by theCalifornia Department of Public Health.

The Luck Pot was started by two 30-something friends who spoke on the condition of anonymity, citing the hazy legal status surrounding the cannabis industry. (This, despite the fact that the event itself appears to be legal in California: The city’s public health department treats a private party at a public place as if it were in a private home, so medical cannabis at such an event would be fine, according to Nancy Sarieh, a spokeswoman for the city’s public health department; Robert Raich, a lawyer who specializes in medical-cannibas law, concurred.)

That night, a woman in a polka-dot dress welcomed guests with what looked like bar snacks: glazed pecans, pretzels, chile-lime peanuts. Unlike the usual nibbles, each came with a suggested dose. “These are what we call our ‘everyday edibles,’ ” said Lauren Fraser, a 29-year-old former mutual-funds manager and now the president of the Oakland-based Auntie Dolores, a company that specializes in cannabis-laced foodstuffs.

Mandi Bateman, a 38-year-old pony-tailed Pilates teacher who had driven in from Sausalito, Calif., seemed uneasy. “I guess I still have that lingering fear you could get arrested for smoking pot,” she said. Getting high with a bunch of strangers was not her main motivation for attending this night. “I thought I might meet some hot men,” Ms. Bateman said. “But then I realized, wait, I don’t want to date a stoner.”

Her odds were decent. The male-to-female ratio was roughly two-to-one, and this was hardly a scruffy “Dazed and Confused” kind of crowd. Tickets were $120 each, and among those in attendance were software engineers, organic chemists, lawyers, authors, Stanford M.B.A.s and tech types from Google, Pandora and Salesforce.

Also in attendance were several “potrepreneurs,” who seemed poised for 2016, when marijuana is expected to become legal in California. Among them was a co-sponsor, Mike Ray, 35, a former Wall Street trader who is now the director at Bloom Farms. Asked about the differences between finance and the nascent pot industry, Mr. Ray said, “The people are much nicer” in the latter.

For Arianne Simone, 28, a Reiki master with a perfectly coifed Afro, the evening was a total surprise. “My boyfriend said, ‘We’re going to a dinner tonight with lots of weed,’ and I was, like: ‘Yea! Yea! Yea!’ ” Scott Samuelson, 42, a commercial television producer, said that he was there for the food. “I’d heard it was the Korean pop-up,” he said. “The pot was just a bonus.”

One of the Luck Pot’s co-hosts, clad in a blazer, welcomed people to their seats. “On your tables is the first of three joints,” he said, acting as a kind of pot sommelier. “Tonight we’re showcasing flower grown by a Sonoma collective of 10 farmers with a total of 150 years’ combined experience in artisanal indoor crops.”

A professionally rolled fatty lay in each ashtray. The first joint of the evening was a strain called Girl Scout Cookies. “It’s an indica-sativa mix, 59 days flowering,” he said. “You’ll taste sweet evergreen with light hints of pepper-spiciness.” He touched on an aspect that wine sommeliers do not discuss, the effect. “This should make you feel focused and relaxed,” he said. “A little heavy-headed. So spark up. Eat. Enjoy.”

As people wrapped pork belly in lettuce cups and blew puffs of smoke, they were asked to sum themselves up in four words. “Kyle,” the Reiki master’s boyfriend said. “I like Afros.” “Justin,” another man said. “I hate cancer.” “Husband home with kids,” said Celine Schafer, a 37-year-old mother of three.

The talk turned to how, exactly, they had procured their medical-marijuana cards. “I told the Skype doctor I had trouble sleeping,” Ms. Schafer said. “He told me to ‘hit the vape.’ ”

“Everyone says, ‘I have insomnia, I have anxiety,’ ” griped Andrew Bock, 34. “I’m like, ‘I have Crohn’s, I’m legit!’ ” The chitchat covered standard topics: bad UberPool experiences, soaring housing costs, the Bay Area versus New York. “I was miserable in Manhattan,” said the good-looking Mr. Bock, who was seated across from Ms. Bateman. Her glassy eyes widened when he said he lived in Sausalito, too. “I’m a block from the beach, I drive an electric carand I just bought a paddleboard,” he said, mocking himself as the California cliché.

“Please pass the joint,” the professor said, as if it were the pepper.

It was heartening to see that, even in these Purell-crazed times, people are willing to share joints.

The man named Justin didn’t want to give his last name, out of fear that he could get into trouble because, he said, he grows marijuana in the house he rents and sells it for recreational use, paying his unwitting 94-year-old landlord in cash. But in this smoky space, his career choice was not something he had to keep secret.

Michael Koch, 38, a father of two and the owner of an online advertising agency, spoke more openly. “I was an indica guy in college, when I’d just lie around,” he said. “But now that I have a job and kids and responsibilities, I smoke sativa. It works for me.” (Indica marijuana tends to have a calming, sedative effect on the user, while sativa is more uplifting and energetic.)

The servers began whisking away the plates. A panic set in. “Wait, is that it?” one guest asked. “There’s got to be more food,” the professor said. “It’s a pot dinner.”

People rejoiced when the second course arrived: a potato stew with pork neck and a joint made with a strain called Fire OG. “Twenty-one percent THC,” the co-host said. “It’s sweet and earthy, slightly woodsy. This’ll give you a mental uplift and a full body mellow.”

Perhaps too mellow. Suddenly, a chair toppled over. “Woman down!” someone yelled. Three guys helped the laughing lady to her feet. As dinner progressed, conversation regressed. “My grandmother used to use these for cashews,” said Mr. Bock, gesturing toward a glass-ridged ashtray.

“My grandma put al-monds in hers,” someone else said, pronouncing the first syllable so that it rhymed with “pal.” “It’s ahhl-mond,” Ms. Schafer chimed in. A number of guests began to chirp the word “almond” over and over again, and the table broke into hysterics.

Accompanying the third course was Holy Grail, the final pot of the night and the strongest. The co-host walked around with a Ziploc bag, distributing. “Does everyone have a joint that wants one?” he asked, like a preschool teacher passing out snacks. “Oh, my God, there’s actually too much pot,” Mr. Koch said, pointing to several half-smoked joints still in the ashtray. Ms. Schafer smiled and tucked one into her purse. “For my husband,” she said.