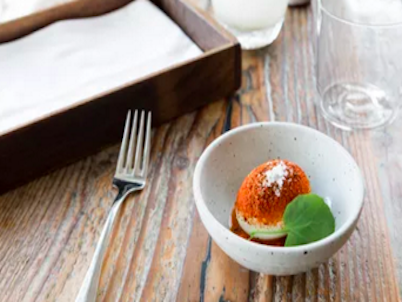 In restaurant real estate, people often talk about cursed locations. You know, where one day it’s New American, the next it’s Thai, two weeks later you walk by and it’s an always-empty spaghetti house. Is it bad food or just bad juju? You don’t actually know because you never even gave it a chance. Expectations are lower for cursed locations.

But then there are blessed locations. Rare gems that consistently house beloved restaurants that eventually shutter or expand elsewhere, leaving behind their good bones and even better vibes. Expectations are higher for blessed locations.

The window-walled space at Octavia and Bush has long been the latter. And as soon as I punctured Melissa Perello’s divine “deviled egg” — showered in dried marash pepper and a chile fresno relish that unleashed a scent so invigorating it could be the new Red Bull — I knew the latest incarnation of this corner lived up to, if not surpassed, its lineage.

Long gone was the New England stuffiness of the Meeting House, a place I was never old enough, or paid enough, to try (but apparently Joanna Karlinsky’s biscuits were so adored she continued baking them for customers until last year); gone was the genteel white linen and wainscoting of the original Quince; the dark-wood, golf-clubhouse air of Baker and Baker. Now, at this rarified 19th-century address, we have Octavia, open since 2015.

Spare yet warm, with wide-planked distressed floors, black Shaker-style chairs, and servers clad in long denim aprons, you could call Octavia’s look upscale Amish. An airy Pac Heights barn packed nightly with blazers and silver hair, yes, but also short dresses and long locks, new boyfriends, old friends, Frances fans making the cross-Market trek. Everyone swooning over dinner out as it used to be: unadulterated. Before hovering became the standard and mixologists became a must, before tightly crammed communal tables and fast-casual counters and drawn-out tasting menus.

Oh, Octavia has one, if you wish. A tasting menu. And we wished one weeknight. Though, unlike most, it wasn’t a big to-do, or, at $75 per person, a boggling bill. It just allowed us to sample anywhere from nine to 12 dishes in four courses — and catch up, without having to agonize over the brief but beguiling menu.

Should we get the meaty Pt. Reyes lingcod in a lightly creamy nori beurre blanc scattered with perfect fingerling potatoes, sweet onions, and pearls of Manila clams? (We should.) What about the wild nettle tagliatelle in a tangle of bacon, egg yolk, peppercorns, and pangrattato? (Most definitely.) The ricotta malfatti stuffed with chanterelles, cauliflower, and French sorrel? (Dry and dull; that’s the one entree we should’ve skipped.)

What about the tomatoes? “Nah, a tomato is a tomato,” my friend declared, arguing that he could slice and drizzle olive oil over the same fruit at home. But the firm, sweet, multihued heirloom hunks, sprinkled with sea salt and sprigs of basil, won him over. Proving that when a restaurant like Octavia offers you tomatoes on a warm September eve, you bite.

A $14 avocado, however? You’re welcome to balk. “It’s a Brokaw avocado,” the server explained, seemingly as unsure as we were what exactly that meant. Clearly it was code for pricey avocado, albeit one that was as smooth and creamy as a savory pot de creme. Covered with broccolini and crisp quinoa, however, it looked more like a Chia Pet.

Any moments of mediocrity were fleeting: Chalky chickpea poppyseed sable crackers overpowered otherwise delightful pickled anchovies on one night, plump mussels with smoked pimenton another. But at least both were only a one-bite, six-buck disappointment. A palm-sized bowl of chilled squid-ink noodles with bottarga and fennel, in a pungent lemon agrumato, appeared to be a nightly staple, but unfortunately tasted more like next-day Bento box leftovers pulled from the fridge. After giving them a second chance on my second visit, I guiltlessly snubbed them on my third.

But that allowed for an encore order of the delicata squash — brawny, beautiful, donut-sized rings coated in a thin, crisp, tempura batter accompanied by a puddle of citrusy aioli and dash of chile.

On one night our petit filet begged for an extra pinch of salt. But that was okay, because lo and behold! There were actually mini ramekins of salt on every table. Fitting, as Octavia is not a place that emanates ego.

Rather, it exudes intentionality. From the open kitchen framed like a painting to each piece of earth-toned pottery by Berkeley’s Sarah Kersten to Perello’s fostering of female chefs, like executive pastry chef Sarah Bonar, who also does the desserts for Frances, and now chef de cuisine Sara Hauman, a 2015 Eater Young Gun, who came on in April off a stint as sous chef at Mister Jiu’s, by way of Huxley and Bar Agricole before that. (She actually got her start cooking at health spas in San Diego; she’s obviously back on butter — and for that my lingcod and I were grateful.)

Desserts, on the other hand: bring ’em on. The more of Bonar’s creations the merrier. Our spoons dove eagerly back and forth between subtle treats that were acutely seasonal. And not in a Starbucks Pumpkin Spice way.

The Eton Mess was a visual mess, but an edible miracle: a mound of meringue mixed with poached quince, gooey butterscotch, and cinnamon ice cream. The toasted angel food cake was firm and moist (as much as we all hate that word, that’s what it was, and it was delicious). With a crackling creme brulee-like crust, it was unlike any of the you-call-this-cake? angel food cakes I recalled as a kid. Especially since it came with a scoop of squash ice cream. (Also delicious.)

That’s the thing about Octavia: It’s the kind of place where you feel like an adult, without even being a tiny bit bummed to be one.

Looking around the dimly lit, 55-seat room, at locals from all decades drinking wine and digging in, the scene was soothing but not serious, fun but not frenetic. For a moment, it felt like something was missing, and I couldn’t put my finger on what. Until I noticed: there was no bar, not even a little one. Unlike so many new San Francisco restaurants these days, Octavia bore none of the trendy moneymaking trappings of the moment. The kind that perhaps a less-blessed location — and chefs blessed with less talent — might rely on.

What I loved most about Octavia, I realized, was that it was there. And will be, I hope, for a long, long time.