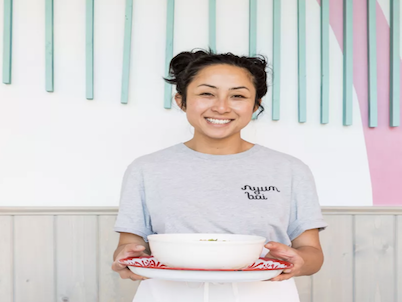 Restaurants are often defined by their view: There are waterfront restaurants and rooftop bars and sidewalk cafes. But sitting on a pastel-pink stool one day in Oakland’s Fruitvale neighborhood, gazing out through a wall of windows, I didn’t see sailboats or city lights or women walking by wearing wide-legged Everlane pants.

Instead, I saw a Donald Trump pinata, dangling not unlike a dead man, from the store next door. And it made my meal of chef Nite Yun’s Cambodian street food even better. I found it satisfying to eat dinner cooked by a member of America’s immigrant community in the symbolic face of a president working to keep immigrants out of America.

If Trump had his way, we’d all be eating his eponymous steaks with ketchup — not dipping asparagus spears into a bowl of pungent Bolognese-like minced pork belly stir-fried with prahok (fermented fish paste) and simmered with coconut milk.

Yun was born in a Thai refugee camp to parents who’d fled the Khmer Rouge’s genocidal regime. Her family of five eventually landed in a small apartment in Stockton, California, home to one of the country’s largest Cambodian communities. Raised in her mother’s kitchen, filled with the smell of fresh-cut lemongrass, she was later inspired to return to Cambodia, to learn about her family and taste her culinary roots. In 2012, while slurping a bowl of noodle soup from a street stall in Phnom Penh, she found her calling.

Here, across from the Fruitvale BART station, steps from both a Payless ShoeSource and 2018 James Beard-nominated restaurant Reem’s, is the consummation of years of her hard work.

It’s also a sign of what’s to come in a changing city. As outpriced San Franciscans continue to invade Oakland, it’s easy to envision the Fruitvale Public Market one day morphing into a mini Ferry Plaza, complete with $4 peaches and $50 boxes of chocolate. But if change means more fantastic locally owned businesses like Nyum Bai, dedicated to enriching the community rather than bulldozing it, the future looks bright.

Inside Nyum Bai, it does too. The decor is airy and light, an upbeat palette of white, pale blues, neon accents, and millennial pink. Paper-wrapped chopsticks protrude from jasmine tea tins. Even the bathroom is somewhere you kind of want to stay a while — clad in wallpaper custom-designed by local illustrator Ratha Nou, featuring a mix of Oakland’s famed shipping cranes and faces of 1960s Cambodian rock stars like Pan Ron and Sinn Sisamouth. The same voices are behind the the music playing softly overhead and the colorful retro album covers that adorn the wall.

It’s all intended to buck our longtime association of Cambodia with its dark days, bringing us back to the country’s golden era. And it works.

Were Nyum Bai on, say, hip Hayes Street, it would no doubt be a fast-casual situation. I admit, I found myself feeling relieved, even relaxed, when I walked in and realized it wasn’t. (Am I tiring of ordering a multi-dish meal at a counter already? Maybe.)

The sad thing is that a place like Nyum Bai would likely never open on Hayes Street, let alone anywhere in 2018 San Francisco, where the costs of running a restaurant are astronomical, including rents up to three times that of Oakland.

Owning a restaurant in Fruitvale, however, is far less expensive. And Yun’s growing fan base benefits: Her priciest dish is $15.95. A creamy cardamom-coconut curry with braised short ribs in Oakland or a Pimm’s cup in San Francisco? Take your pick.

The sadder thing: A place like Nyum Bai couldn’t open at all without Kickstarter, yes, but also without assistance from food incubator nonprofits like La Cocina, whose primary mission is to help low-income women from immigrant communities realize their professional dreams.

One could argue that the industry is tough for anyone trying to open a restaurant, regardless of race or gender. But for the women La Cocina supports, that deck is stacked particularly high. This is expressly why the organization launched in the Bay Area in 2005 —and why a cook like Yun was able to go from her mother’s kitchen to culinary entrepreneur to chef-owner of a restaurant — a restaurant so good, mind you, it’s in the top five of my running mental list and among Oakland’s top 18, according to my colleague Bill Addison.

Yun spent a year perfecting her mother’s recipe for kuy teav, a classic rice-noodle soup, before debuting it at her first San Francisco pop-up in 2014. She later moved to a kiosk at Emeryville’s Public Market. And now, at her first brick-and-mortar restaurant, the kuy teav “Phnom Penh” — dried shrimp and minced pork in a light, subtly sweet seven-hour pork broth brimming with fresh herbs and flecks of fried garlic — is just one star on a menu filled with them.

The restaurant serves 15 or so items, split into three loosely defined categories. My glistening pile of ginger fried chicken was slotted under “Snacks,” but in both size and sticky, crackling satisfaction, it was so much more. Even San Tung’s dry fried wings have got nothing on Yun’s.

Another supposed snack was skewers of grilled beef. Marinated in an umami-packed mix of fish sauce, honey, and lemongrass, countered by wisps of chile powder-dusted pickled papaya, the dish could have easily doubled as a small plate.

The condiment caddy deserves a category all its own. It’s a quadrant that includes a fiery hot sauce — a family recipe made with chiles dried over a wood fire — and something Westerners typically only offer with coffee: sugar. Sugar is a staple, our server explains. “Cambodians sprinkle it like salt.”

Tempting, but to me, the wilted stalks of garlicky water spinach delicately stir-fried and speckled with salted soybeans are perfect without it. So too is the kuy teav cha, which may have forever ruined me for pad Thai. The slippery rice noodles are stir-fried with dark soy and tamarind, touched with palm sugar, and blanketed by a sunny-side-up egg — further proof that a sweet yolk enhances everything.

As did knowing that the hundred bucks or so our foursome spent eating almost the entire menu supports a supremely talented, self-taught chef — a woman who has opened just the kind of restaurant America needs more of.