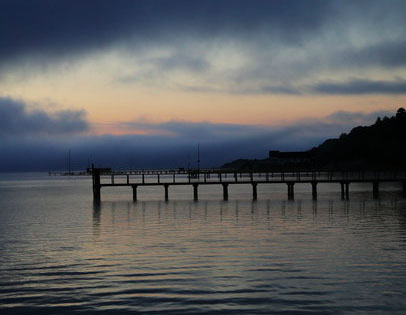 That first time I walked through the grassy dunes of Point Reyes National Seashore, back in 1997, it felt familiar. On this stretch of California sand, I’d found the West Coast doppelgänger of Gay Head, on the southwestern point of Martha’s Vineyard, from where I’d recently moved. Though it was summer, I was wearing a fleece, and the sandstone cliffs of Limantour Beach were shrouded in fog. But the echoes of the Vineyard in Point Reyes were immediately clear: a rugged, relatively remote refuge with salty air, fresh fish and a strong sense of place.

The differences, though, soon became evident. At Point Reyes, there was no mugginess or mosquitoes. No ferry lines or frozen mudslides. No tennis whites or Nantucket reds. No crowds. It was my West Coast Martha’s Vineyard, I decided one recent weekend while sitting solo on a hay bale in the sun eating a grass-fed goat burger, only better.

On the Point Reyes peninsula, a winding hour-and-a-half drive north of San Francisco, friends and I have hiked for miles and kayaked with harbor seals; we’ve pitched tents on pocket beaches and shucked oysters at ramshackle farms. And come fall, when the weather warms and the (slightly less chilly) water beckons, we even swim.

Point Reyes also has more Holsteins, herons and herds of tule elk than humans; locals live in a handful of blink-and-you’ll-miss-them-type of towns: Olema, the tiny gateway, at the well-trodden intersection of Highway 1 and Sir Francis Drake Boulevard; Inverness, on Tomales Bay, with its own bare-bones yacht club founded in 1912; Marshall, which draws oyster-slurping day-trippers, with six-packs and sauvignon blanc in tow; nearby Bolinas, notoriously unfriendly to outsiders.

With a bookstore, a bakery beloved by cyclists and a feed barn that doubles as a yoga studio, Point Reyes Station (population 848) is the metropolis of West Marin, what the locals call their rich agricultural region, home to organic dairy farms, sustainable grass-fed cattle ranches — and 70,000 protected acres of pine forests and coastal prairie.

The original plan, promoters said, was to turn it into “a Jones Beach on the Pacific,” before John F. Kennedy, urged by a group of local conservationists, declared it a national seashore in 1962: 80 miles of shoreline forever free of condos and golf courses, cabanas and cotton candy stands.

Still, at 51, the Point Reyes National Seashore remains every pastoral cliché: cow country, birder’s paradise, heaven for hikers. Now add to that list foodie destination, as local restaurants are finally on par with the local ingredients. “West Marin is one of the most vibrant local food sheds in the world,” said the writer Michael Pollan, a friend to its tight-knit group of farmers, ranchers and cheesemakers. Alice Waters recently told me it’s where she wishes Chez Panisse could be.

In February, Margaret Grade and Daniel DeLong, two friends of Ms. Waters, opened a restaurant, Sir and Star at the Olema, which is as committed to using ingredients farmed/foraged/fished “within arm’s reach,” to use Ms. Grade’s phrase, as was their famed Manka’s Inverness Lodge, before it burned to the ground in 2006. Now, instead of committing to Manka’s seven-course prix fixe feasts, hiking-boot-clad diners pop by for homey dishes like Dave’s Beef, Cooked Around the Clock — or, on a Saturday night, wait so long for a table that the supply of homemade dinner rolls runs dry.

Dave Evans (of the aforementioned beef), a fourth-generation rancher and owner of Marin Sun Farms, is thrilled that the culinary scene here is thriving. “It was always ‘barbecue oysters with the same sauce,’ ” Mr. Evans said. “Now it’s, like, ‘artisanal oysters, in a brown butter shallot sauce’ — and three other ways.”

Not everyone, of course, is thrilled with change coming to an area meant to remain unchanged. “Point Reyes Station used to be a country town,” said Barbara McClellan, owner for the last 38 years of the novelty shop Lil Bit of a Lot o’ Things. “Not anymore,” she lamented, surrounded by gag gifts like phony hickeys, dusty Christmas decorations and “Everything Must Go!” signs. Her store will become a wine shop when Osteria Stellina, the farm-to-table trattoria next door, expands next month.

As Dan Morrissey, the third owner of the 100-year-old barbershop down the block, bluntly put it: “All the old people here are dying, and the yuppies are moving in.” Real estate prices have jumped roughly 20 percent in the last few years, according to brokers.

All of which is why my husband, Josh, and I like to rent a place and pretend we’re locals. In May, we stayed at our favorite little guest cottage, found on the rental site VRBO.com — up on a ridge, with views of forested Mount Vision and the occasional osprey.

Another plus for rentals: sometimes the owner becomes a guide. Ours led us on a walk through “the secret trails of Inverness,” as he called it — a woodsy labyrinth of easements blazed in the late 1800s.

Through unlocked gates of rustic homes passed down through generations, I was introduced to a frail former judge who is building a chicken coop in his backyard, which has sweeping bay views, and a 50-something environmentalist who supplies his friends with fresh-caught salmon.

The next day, we explored the area’s oyster farms. We joined a beekeeping couple from Kansas City who stopped on their drive up Highway 1, specifically for the Oyster Lover’s Tour with new West Marin Food & Farm Tours. Elizabeth Hill, whose grandparents and great-grandparents summered in Inverness, recently moved here full-time herself, to start a series of small-group culinary excursions. It’s the first of its kind in a place that typically eschews anything oriented toward tourists. “I overheard a woman complaining the other day about ‘some new tour company,’ ” Ms. Hill said. “ ‘Oh, it’s O.K.,’ ” she recounted the woman’s friend saying. “ ‘It’s Norma Wells’s granddaughter.’ ”

Stuffed on briny oysters and a picnic lunch of pastrami, bread, blue cheese and chutney (all locally made and obtained at various area shops), Josh and I mourned the fact that there was no time for our favorite 10-mile trek through the tule elk preserve at Tomales Point. Maybe a bioluminescence paddle on the bay tonight instead, we decided.

That evening, en route to the bay, though, we spied a trail winding through a lush meadow and pulled over. The air was warm and still, and we were joined only by munching cows. Then, suddenly, a great blue heron swooped down to grab a gopher. Getting hungry, too, we turned the car around.

Sunday at Sir and Star is much mellower, a locals’ affair. “You’re back,” our server said with a smile, as we slid into a table by a window.

Did we really just skip kayaking under the stars for dinner rolls? But then they arrived: six still-warm, pull-apart buns, with a mound of butter churned with local cream and whipped with West Marin honey. The butter was so good that when the bread is gone, I went for my spoon.

For lodging, the home rental site VRBO.com is the way to go. Though rental rates are rising, what you’d pay for a summer week in Martha’s Vineyard could buy an entire month in Inverness. Accommodations can range from a one-bedroom renovated chicken coop to a waterfront cottage to a modern house with a living roof and lap pool.

Tucked in the trees across the bay, Margaret Grade and Daniel DeLong run the scattering of cabins at Manka’s Inverness Lodge (30 Callendar Way, Inverness; 415-669-1034; mankas.com; from $215) with fireside dinners on Fridays and Sundays and homemade sticky buns and yogurt delivered daily.

In Marshall, the cluster of well-appointed cottages at Nick’s Cove (23240 Highway 1, Marshall; 415-663-1033; nickscove.com; from $229, two-night minimum) are somewhat overpriced for being on such a busy stretch, but those on stilts — like the ones called Ruthie’s and Al’s ($399) — directly above the bay are worth it. Dogs are welcome, too.

West Marin Food & Farm Tours (foodandfarmtours.com; $152 per person) is a terrific way to get to a taste of the sprawling agricultural area.

Bring your own kayak or rent from Blue Waters Kayaking (415-669-2600; bwkayak.com) with locations in Inverness and Marshall. It also runs guided sunset, bioluminescence and full-moon paddles.