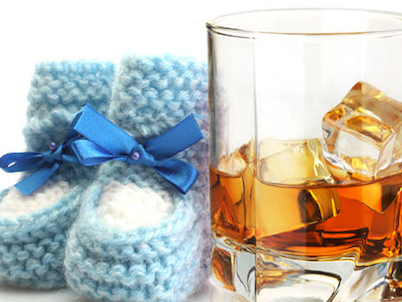 “What a day…” I said to my new husband, Josh, uncorking a bottle of cab before bed.

On my commute home earlier that evening, my best friend Madeleine had called from Portland, with News, out of nowhere. “I’m pregnant!” she cheered. I was happy for her, if overwhelmed by what it implied for me. The fact that Madeleine was having a baby meant that someday sooner than later, I might have to have one, too.

I hung up and dashed into a Thai restaurant, where my friend Kimmie was waiting—with more News of her own. Meanwhile, my little sister back East was well into her second trimester.

“I can’t believe this is happening already!” I cried to my husband, an aspiring father himself, as I curled into the fetal position on the couch with my goblet of red. “Why is every human I know pregnant?”

A few nights later, he and I went out for Mexican food with Kimmie and her boyfriend to celebrate. The three of us non-pregnant people toasted with tequila shots, followed by ginormous margaritas, while Kimmie clinked her sparkling water with lime and tried not to glower at us.

A month, maybe more, passed. My sister emailed me photos of her bulging belly. Madeleine and Kimmie’s pants grew tighter. I continued to pop my birth control pill every morning.

And my urban professional, semi-hedonistic, happy child-free life in San Francisco carried on. Josh and I went out for our weekly sushi fix, complete with sake and Sapporos and more nigiri than you’d expect a normal hungry couple to consume. I drank a double-shot latte every morning and a glass or two of wine, sometimes three, more nights than not. I ate soft cheese. I ate raw cheese. I ordered a processed turkey sandwich from the deli counter pretty much daily. I skied at 11,000 feet. I lolled in a hot tub or two. Once, home solo on a Friday night, I discovered a leftover joint in the coffee table, lit it, and looped reruns of Sex & the City.

Then a good friend who likes good food was visiting from Manhattan and we went out for what I now jokingly refer to as my Last Supper: a four-hour Michelin-starred meal, which kicked off with Prosecco and ended with port and had at least seven courses and as many wine pairings in between.

The next day my head hurt. But, oddly, my breasts hurt more. I recalled Kimmie complaining about a similar symptom and rang her immediately.

“Maybe you should take a pregnancy test,” she advised.

But, then I remembered: I am also irregular. So, just to rule out the possibility, I swung by Walgreens and grabbed one of those purples E.P.T boxes I’d always assumed were for other people.And then, home alone in my bathroom, I watched as a fuzzy blue + appeared. Like Juno, I remained unconvinced, and frantically took another test. There it was again: +. WTF.

As soon as Josh walked in the door, I showed him this strange cotton strip of an intrusion. Stunned, and late to meet friends, we tabled it and adjourned to dinner, where I didn’t touch my glass of wine. As if it matters at this point, I thought. My mind did a rapid rewind of the past few months. I had no idea how pregnant I was, if I really was pregnant. But either way, wasn’t the damage already done?

The next day, I demanded an appointment with my doctor. She was on vacation and I was redirected to a white-haired old man I’d never met. A younger woman in a white coat sat by his side with a notepad, apparently a resident, there to learn the ropes. Trying to sound like the intelligent, responsible person that, up until then, I’d thought I was, I spilled my story, in between sobs. The pill… The tequila… The wine… Kind of a lot of wine, sometimes…

I tried to make light of my predicament and put it in perspective. “I mean, aren’t there babies born to crack addicts every day who turn out fine?!” I said smiling weakly, waiting for him to tell me, Yes, yes, of course it’s fine. But instead he just gave me a strange look and said, deadpan, “No, those babies are generally not fine.”

But I didn’t smoke crack! I reminded him, realizing he wasn’t getting my bad joke—or me. “Do you think this baby will be okay? I mean, should I not keep it??” I asked, searching for some sort of affirmation. He said nothing. I looked to the female resident; she remained silent.

I sobered up from my hysteria. “Wait, are you telling me that because I drank alcohol, I should have an abortion?” I asked.

“It’s your decision,” he said flatly. I walked out of the office and into the crowded elevator, wailing.

I felt like one of those hapless 16-year-olds on that TLC show, “I Didn’t Know I Was Pregnant,” except I was 33 and newly married and fully employed and primed—by societal standards, at least— for motherhood.

Later, at my first ultrasound, I was told I was 13 weeks, six days pregnant. Further along than both Kimmie and Madeleine, much to their amusement when I later broke my news. Somehow, a baby had invaded my body and I managed to sail through my entire first trimester—typically a trying, anxious time— without even realizing it. I have to admit, ignorance was indeed bliss. Had I known, I would’ve been like every other pregnant person out there: overly preoccupied, paranoid, and occasionally, insufferable.

Women today are subject to a whole laundry list of worries regarding what not to ingest and not to imbibe and not to involve themselves in when pregnant. After the first article on Fetal Alcohol Syndrome was published in the Lancet in 1973, alcohol eventually made its way to the top of the list, dropping into “occasionally okay” territory, whenever a report was released that said “light drinking” during pregnancy contributes to better behaved boys or some-such.

And now, last week, the Centers for Disease Control and Prevention took it a step further—by declaring what women ages 15 to 44 who are not pregnant should not do: Namely, drink alcohol.

The backlash was, of course, rampant. Tweets and op-eds and rants posted all over the place calling the (albeit well-intentioned) suggestion condescending and unrealistic. (A favorite was from Kalyie Hanson who called herself the “pre-pregnant” national communications director for NARAL. “Okay, CDC. It’s not my glass of rose that’s the problem. It’s a culture that doesn’t respect women or trust us to make our own decisions.”) A friend of mine told me how someone on her Facebook feed linked to a news report saying the CDC recommends all women not on birth control abstain from alcohol, and she added the comment, “Oh yeah? Well I recommend you go suck a bag of dicks you sexist douche bags.”

I prefer the way Rebecca Solnit put it. But hear, hear to the Internet’s collective outcry. Plus, instilling fear in an entire population of people who may or may not—or may never even want to— become pregnant at some point is kind of absurd.

I agree that the American Academy of Pediatrics’ current position makes good logical sense: the standard for pregnant women should be no drinking at all, since alcohol-related birth defects and developmental issues are “completely preventable when pregnant women abstain from alcohol use,” as a report released in October stated. But I do think, like many others, that the level of panic surrounding pregnancy has become overblown.

Fetal Alcohol Syndrome is real and tragic— and yes, completely preventable. For alcoholics, of course, it’s a serious problem. For frequent pregnant drinkers, it probably is too. But, I don’t know… if, once in a while, a pregnant woman waddles into a bar for a beer, is it really such a big deal?

There’s this strange idea that from the moment a woman is impregnated she’s supposed to, somehow, avoid all risk. But a pregnant person is still a person—and, as people roaming the planet, we are constantly taking risks. When we cross the street (could get hit); when we go to the movies (could get shot); when we eat at Chipotle (if we ever eat at Chipotle again…). I commuted two-and-a-half hours a day in California traffic while I was pregnant. I wonder, really, which posed a greater threat: the wine I drank or Highway 101?

Being a responsible pregnant woman, or parent, doesn’t mean eliminating risk —but managing it. Is it responsible for someone who is actively “trying” to drink four shots of bourbon or shoot-up heroin? Obviously not. But it does seem like a reasonable level of risk for a 30-year-old woman who is having sex and not on the pill to split a bottle of wine with her boyfriend at dinner. Who invited the CDC to the table?

A lot of OBs will quietly tell you what mine —one of the most respected in San Francisco— did (once I finally got an appointment to see her). That this “no drinking while pregnant rule” is really in place because, well… if it wasn’t, some women would probably go nuts.I get it. I realize with the advent of the 44-ounce Super Big Gulp and the $9.99 all-you-can-eat buffet, Americans have lost a little credibility in the self-policing department. Still, whatever happened to the Socratic motto, “everything in moderation, nothing in excess”?

When I got pregnant with my second kid, I knew it from the get-go. And, yes, I curbed it like a normal person. Still, during a weeklong vacation to Paris, while seven months pregnant with my son, I drank one glass of wine a night. (Despite the fact that, for the record, according to my server, French women actually don’t drink wine when they’re pregnant.)

I’m not advocating women booze their way through their first trimester. Not even through their third. My story is just one data point in an amniotic sea of overwrought 21st century anxiety. Maybe it will move one newly pregnant woman to live a little and put lox on her bagel.

Back in the Mad Men era, of course, pregnancy was considered a nine-month inconvenience at most, barely a reason to alter one’s lifestyle. Expectant mothers swilled martinis and smoked cigarettes, even swallowed diet pills if they’d gained too much baby weight (doctor’s orders!). A vodka-and-OJ was essentially a welcome cocktail at some hospitals, believed to prevent premature labor. In the 19th century, physicians apparently suggested champagne to ease morning sickness.

We’ve all guffawed over these outdated anecdotes. I clung to them constantly during the second half of my pregnancy, as friends consoled me with tales of their mothers’ gin-and-tonic habits that put my glass of wine or two to shame.

My mom never drank, she still doesn’t, but she did smoke a pack a day while she was pregnant with me. (“The doctor said I could!” she reminds me, adding that they’d share a Parliament at every appointment.) I was four pounds and a month premature, but otherwise apart from seasonal allergies and non-pregnant neurotic tendencies, I’m alive and well.

And so is my daughter.

Friends told me I was lucky. To have so easily gotten pregnant. To have avoided worrying about every little thing, like they did. And though I felt anything but lucky at the time, looking back now, I realize of course I was, for so many reasons. Number one being now seven-year-old Hazel— a witty, sweet, little girl with wild curls and a wide smile— who dodged every obstacle I’d inadvertently thrown at her in utero, including a pill intended to prevent her very existence. And yet she emerged on that clear October day, a healthy, blue-eyed, tiny triumph.