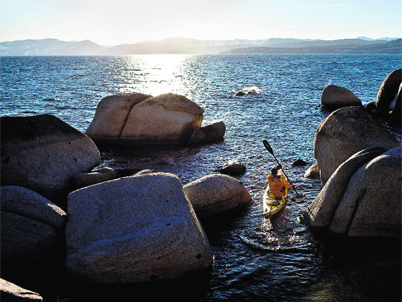 Bumping along a freshly plowed road in Lake Tahoe, Calif., I felt oddly unburdened. No skis were locked on top of my car, no clunky boots rattled in the trunk. After more than a decade of ski trips to the region, I kept feeling as if I were missing something. Sure, it was sunny, but also a biting 17 degrees — and I was going kayaking.

“You’re going what?” asked my friend when she heard I wasn’t joining her for another powder day at Squaw Valley. “Seriously?”

Seriously. It was the week between Christmas and New Year’s Day — the most crowded week of the season at one of America’s most visited ski destinations. Thanks to a record-setting December snowfall, the actual skiing had been phenomenal. But I was sick of struggling to find a parking spot, tired of waiting in all those lift lines that were as congested as the bumper-to-bumper traffic that led to them.

Of course, Tahoe offers more than just downhill skiing: snowshoeing and cross-country are the go-to alternative snow sports for most crowd-dodgers. But kayaking? In the dead of winter? Not so much. Not even on the largest alpine lake in the United States, and the second deepest in the country. A lake that never freezes over, where the surface appears so placid and the snowcapped scene so screen-saver-serene that it makes you want to leap off the chairlift into the hallowed blue water. For most, though, the primary function of Lake Tahoe in winter is as a breathtaking backdrop.

But for a small but growing band of adventurers, the lake itself is the star of the Sierra Nevada — and actually more so in the cold-weather months than in summer, when an even greater number of seasonal visitors descend on the area and afternoon thermal winds swoosh in daily, making the water choppy and the paddling iffy. In the winter, however, the lake is glassy and calm. And, of course, cold. “Thirty-four degrees” read the scrawl on the white board behind the register at Tahoe Eco-Sports, the kayak shop where I equipped myself — and the only one on the lake that rents boats in winter.

“The risk of hypothermia is high,” said Harry King, the shop’s owner, handing me a dry suit. (The difference between a dry suit and a wetsuit is that the rubber-lined dry suit is designed to prevent even a drop of water from entering, and therefore provides better thermal insulation.) “Fall in without this, and you’d have maybe a minute.”

Mr. King helped me wriggle into it, making me feel a bit like my 2-year-old getting into her pajamas. Zippers, sealed with rubber, were zipped, booties were Velcroed, a spray-skirt was strapped on, and pogies (oversize neoprene mitts) were snapped to my paddle to protect my hands from the splash.

Our small group of six walked behind the shop to a rainbow of snow-covered kayaks, and, with minimal effort, dragged our boats through the snow, down to Kings Beach, one of the best entry points on the lake’s 72-mile perimeter. “Another perk to winter kayaking,” Mr. King said. “We’d have to carry these babies in July.”

“You’d also have to dodge drunk wakeboarders and 14-year-old jet skiers who don’t know what the heck they’re doing,” said Richard Gorbet, a semiretired rock-crusher from Reno, Nev., with six kayaks in his garage (and just two pairs of skis), and an e-mail alias of “kayakaholic.” He likes to go out for full-moon paddles on the lake with friends like Chuck Freedman, a k a “tsunamichuck,” a nurse, also from Reno, with a collection of seven kayaks and an addiction to “surfing the waves” during winter storms.

“Ready to swim?” asked Mr. Freedman as I climbed into my single kayak. I laughed — hoping he was kidding — and shimmied off through a bunch of mini-icebergs floating around the shoreline.

It took only a few paddles and then, much sooner than I expected it: serenity. A kind of quiet, otherworldly solitude I’d never before experienced in Tahoe. Immediately, I felt the difference between being on the water and gazing down at it. I felt like we had cheated the system: it appeared that we had the giant, much loved lake all to ourselves.

“Someone has to be out here,” Mr. King said, as he paddled beside me. “It’s so spectacular.” After 15 years, the novelty had not worn off for him.

The lake below us was amazingly clear; as we paddled out, I stared about 70 feet down to hole-pocked rocks and rippling sand, before the bottom dropped to 1,600 feet and went black. The water lapped around us, hypnotically. The sun twinkled on the surface like a million fireflies. Slowing down, I cupped water with my hand and took a sip. It tasted cold and crisp. Surrounded, 360 degrees, by soaring peaks frosted white and pine forests that looked as if they were dusted with confectioners’ sugar, I felt a bit like I was inside a snow globe. The distant runs looked devoid of people, and for a split second, I wished I were skiing. Then my focus settled on the merganser ducks dawdling around us and I wanted to be them. I also realized I was as close as I was going to get.

We pushed past creaky cabins teetering on cliffs and a few condo communities that would typically make me cringe. But out here, in the middle of the lake, it was easy to imagine what Tahoe was like before the influx of fancy all-wheel-drive cars and fake Bavarian villages. Soon, we pulled up to the lake’s only hot springs — a few steaming rock pools accessible only by water (unless you happened to own one of the condos behind it) — and dipped in our booties.

Later, we crossed into Nevada — the state line bisects the lake — and paddled up to Stateline Point in Crystal Bay. It’s also known as the boulder-strewn belt where mountain lions like to sunbathe and bears are rumored to hibernate — and, on apparently every day this winter but the one I was out, Lake Tahoe’s increasing population of bald eagles balance in the treetops.

“This reminds me of Glacier Bay,” said my friend Anne Krumme, a former Alaska-based kayak guide, as she weaved between boulders rising from the water and caked in ice. “I mean, serious National Geographic stuff! It’s got to be the only similar experience in the lower 48.” Apart from breaching whales and calving glaciers, I had to agree.

As we paddled on and the sun beat down, I realized that not only was I sweating under my dry suit, but Mr. Freedman’s comment wasn’t a joke: I was ready to swim. We pulled into Speedboat Beach on the north shore — typically booked with weddings all summer long, but now totally empty except for swaths of snow and a few frighteningly fresh prints from prowling mountain lions. I stepped out of the boat and into the bracing water. Hooray for dry suits! I was neck deep in Lake Tahoe in December! I used my personal flotation device to do a little Dead Sea-style float, made myself a false promise to never ski again, and then joined the group on the woolly blanket for a beach picnic.

We sipped cups of coffee brewed over a propane tank and spiked with Baileys. Clouds swooped in. The descending sun cast a late-day glow, illuminating the peaks across the lake. And for the first time since we’d set out, I started to feel a little cold.