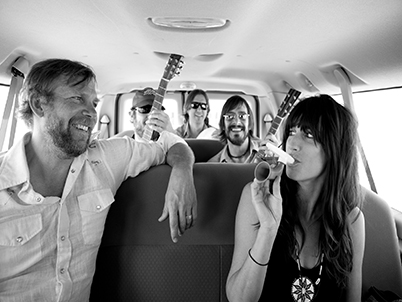 In the Van with Nicki Bluhm & The Gramblers

Kemmerer, Wyoming is the sort of middle-of-nowhere small town that doesn’t see many visitors. The closest major city is Salt Lake, two hours away, and its only claim to semi-fame is the J.C. Penney Mother Store, circa 1902. But for Nicki Bluhm & The Gramblers, Kemmerer is a must-stop—one of 117 on last year’s tour, that had this rising country-rock band crisscrossing the country, ultimately logging a whopping 57,000 miles.

Home is technically San Francisco, but, really, this one-woman-five-man band lives in the van, in musty motels, at greasy diners. At the whims of the saloons, clubs, and festivals that book them, their routes are often illogical and backtracking is frequent. In summer 2012, they passed through Idaho Falls, Idaho three times in one month. Which is to say, this talented group understands what a road trip is all about: the off-the-beaten-path places—and what happens as you ramble between them.

On this warm summer evening, they’ve hightailed-it 340 miles from Bond, Colorado to roll in right on time to headline Kemmerer’s annual Oyster Ridge Music Festival. The vibe is more ’70s than 21st century—and not just because Nicki looks (and sounds) like a dead-ringer for Karen Carpenter. The grassy square is filled with camping chairs and coolers and a motley crew of locals who quickly become friends—gray-haired men in overalls; toddlers bopping on shoulders; a scattering of twirling hippie-chicks; even a real-life Smokey the Bear, wearing the same Wrangler jeans as Nicki. All congregating for corn dogs and Coors and the sort of free Friday night fun every road-tripper hopes to just stumble upon.

Except, the thing is, we don’t. In these time-crunched, overly efficient days, we’re too busy bee-lining from Yosemite to Yellowstone, Telluride to Santa Fe, to bother being carefree. The modern-day road trip has become more like a micro-managed death-march between big-name attractions, carefully choreographed to maximize a week’s worth of vacation time.

Not so for Nicki and her Gramblers. They may not have time for a guided tour of the Tetons, but so what? They know where to find cold PBRs and warm waffles for breakfast at 10,000 feet. A steamy hidden hot springs off the highway. The best places for a pit stop.

Their white rental van might as well be a wood-paneled station wagon, without the Are We There Yet? gripes and sibling squabbles and crackly 8-track radio. There’s no radio whatsoever, actually. None needed. Not with Tim on harmonica; Deren on mini-guitar; Mike banging on a drum; Dave clapping to the beat…and Nicki blowing your best car-karaoke efforts away, singing her heart out at 70 miles per hour.

Nicki Bluhm & The Gramblers’ five million YouTube viewers of their wildly successful Van Sessions would agree: these guys just might be the last real road trippers.

Watch their Hall & Oates cover and you’ll hear the hallmarks of the young band: their soft harmonies and shaggy confidence, Nicki’s voice, soulful, outward-reaching. But listen closer, just beneath the music, and you can hear something else, something more familiar. A low, steady hum. It’s the sound of the open road.

DINERS IN THE ROUGH

“We’re kind of food snobs,” says Tim Bluhm, digging into a plate of braised short ribs, paired with pinot, at the Cascade Grill, in Jackson Hole, following a late afternoon performance in Teton Village. For once, the band is being fed—well. The night before, it was “the worst pizza I’ve ever had in my entire life,” as Tim put it in Pocatello, Idaho, as he tossed a piece of half-baked crust over his shoulder.

And the morning before that: It was Café Ritz, in Kemmerer Wyoming. Puffing on his tenth cigarette of the morning, Bob, of Bob’s Rock Shop, warns us Café Ritz is expensive. But at six bucks for biscuits and gravy, it’s not the prices that are the problem. It’s the service. Apparently, when you’re the only place in town for pancakes, turning tables is not a priority. Finally, the harried waitress brings over seven mugs of burnt coffee and takes a pen from behind her ear. But then a baby cries. “Uh, be right back,” she says. “I’ve got my two-month-old in the kitchen.” When she returns 20 minutes later with a hot pot of coffee in one hand and, indeed, a newborn—neck dangling—in the other, Tim Bluhm up and bails on his yet-to-arrive waffle. Mike the drummer follows him out the door.

“Tim calls it the Food Desert out here,” says his wife and bandleader, Nicki, digging into her scrambled eggs, which eventually arrive. Cold. “I think it’s the toast that took them so long,” says guitarist Dave Mulligan, holding up a flimsy piece of un-browned white bread.

LIFE IS A HIGHWAY

A four-row passenger van crammed with six band members (half of whom hover around six-feet or taller) and manager, Scotty, behind the wheel, can look pretty lived-in pretty quickly. But apart from paper plates with leftover tamales from the lady in town; a jar of raw cashews in the center console for snacking; and a few Sierra Nevada empties rolling around (consumed during a game of Frisbee when the van broke down in Wyoming), the Gramblers are a relatively clean crew.  Not to mention, mellow. It’s more like a roving college dorm (of 30-and 40-somethings) than a raging party. Conversations over the seats take as many twists and turns as the roads themselves. On one eight-hour drive, they’ll cover everything from polygamy to making pizza to missing their moms to the contorted facial expressions made by Olympic divers mid-air. (Google it. Very cool.) But Van Time also doubles as Quiet Time. Nicki points out all the pretty horses along the side of the road while writing thank you-notes (“I heard Alison Krauss does that, and I thought, that’s so nice.”) Tim reads a book written by his childhood friend Mark Sundeen, Car Camping: The Book of Desert Adventures.  (Apropos as the band was soon headed to the Southwest.) Deren logs onto Facebook before sharing the good news, “Guys, we just broke 16,000 Facebook fans!” (Now, a year later, they’re pushing 30,000.)

They haven’t made it to the Chateau Marmont (yet), but occasionally the Gramblers do luck out, with a room with a hot tub in Teton Village or an Internet fan’s horse ranch in Washington. More often than not, though, “It’s a Priceline Night,” as Nicki puts it. Which means they wing it, scrolling for affordable rooms on their iPhone app, as they roll into town. (“$40 at the Red Lion Inn, in Boise! Who cares if the elevator wasn’t working, the lobby bartender was.”) It might be a local motel decorated in ceramic owls. Or, the supposedly romantic Black Swan Inn in Pocatello, Idaho, where the band gathered for après-show beers in Tim and Nicki’s “Enchanted Forest Suite,” among faux leafy trees and murals of unicorns. The Applegate River Lodge in Southern Oregon was “idyllic.” But, once in awhile, accommodations are downright disgusting… As Darren recalls: “In Oregon, I once spied a bunch of Saltine crackers mixed with hairballs on the carpet. I called my dad and said, ‘I’m going to law school.'”

What’s the difference between a road-tripper and a rock star? No one cares whether you show up, but when Nicki Bluhm & The Gramblers roll into town, people are actually expecting them. After a big drive, they can’t just grab a pizza and go to bed; they’ve got to play—sometimes to a sold-out crowd, sometimes to a near-empty saloon. But every time, fans swoon. After the show in Kemmerer, a grown woman in pigtails pulls up a barstool and starts chatting with the band like she’s known them forever. A gaggle of tweenage girls gives Nicki a hug when they see her strolling down the sidewalk. A gray-haired man in overalls walks up to tell her: “You did good.” In less than 24 hours, the band has become local celebs, only to move on to the next town and do it all over again. “We meet cool people,” says Nicki. “Most of the time.”

TOURIST ATTRACTIONS OF A DIFFERENT SORT

Being on tour is like being on the anti-Grand Tour.Yellowstone is out. No time for a hike in Grand Teton National Park either. Instead, sightseeing is more happenchance, fun found en route. Like, say, in Kemmerer: “Look, it’s the JC Penney Mother Store!” says Nicki, snapping an Instagram pic of the circa 1902 store. “Let’s see if they sell swimsuits.” (In the heat of the summer, oddly, they don’t.) Instead she finds a hot-pink “Pretty Woman“-like number in Lava Hot Springs, an Idaho vacation town taken over by bikini-clad tourists toting inner tubes. The next day, the van creeps along Highway 20, as Tim hops in and out between mileage markers, hunting for this secret hot springs among the roadside brush. Finally, he finds it—not a sole in sight. And no bathing suits required.