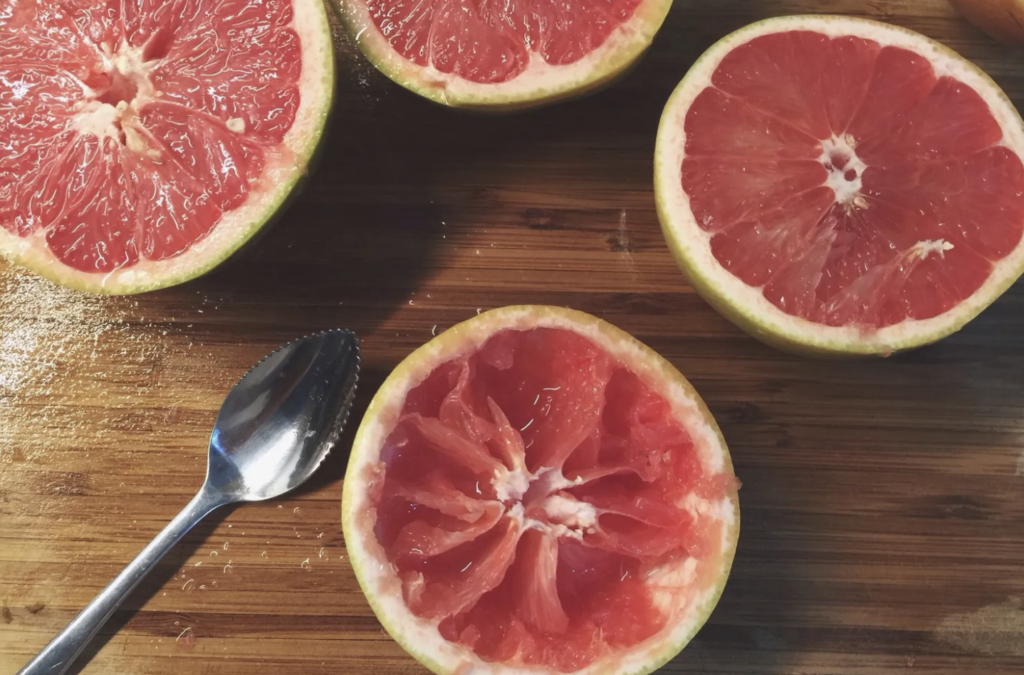 In Defense of Grapefruit Spoons (and Anchovy Forks, and Peanut Butter Knives)

We had two grapefruit spoons when I was growing up. Stragglers, clearly, from somewhere. They sort of scared me: With their sharp teeth, they were the sharks of the silverware drawer. Since only my parents ate grapefruit, only they used them. My parents had grapefruit spoons because their parents had grapefruit spoons, but those came with more pomp: They were sets of eight, sterling silver, each lying peacefully in its own slot in a felted wooden box. Whereas our serrated, stainless steel duo lived unceremoniously, jumbled among the teaspoons. Every so often I’d accidentally grab one and get a good cheek-graze with my Honey Nut Cheerios.

Once I had my own home, and my own silverware, I forgot all about the citrus spoon, even though I came to love grapefruit. Instead, I painstakingly cut through the membranes with a versatile paring knife, until each wedge was wrested free. Using a grapefruit spoon to eat a grapefruit seemed akin to using an umbrella in a drizzle. A little ridiculous. Dainty. I was tougher than that. More practical, too.

Like fine china, specialized silverware seemed so antiquated. One-off utensils of yore. So Emily Gilmore-esque effete. So superfluous. Just more stuff in a drawer — in a world! — already cluttered. My kitchen had what it, and I, needed, and nothing more.

Until I met my mother-in-law, the queen of obscure, single-use culinary gifts of the inexpensive, unrefined kind: plastic-square pan scrapers, strawberry de-stemmers, apple slicers — she’s sent them all from across the country, with love. It was the pasta scooper that sold me. Serving spaghetti had always been more of an unruly spoon-fork-lift affair for me — and now here I was! Filling bowls like a boss, not a strand astray. It began to dawn on me: By dismissing such humble, hyper-specific inventions, I was actually making my kitchen more complicated.

But while the pasta scooper made me a single-use convert, there’s no Grandma Ida Kitchen Item I’ve loved more than the peanut butter knife. With a sturdy, thick, red handle and perfectly curved 7-inch stainless steel blade, the $12.99 utensil gets to the bottom of the jar, “saves your knuckles” from getting gooped (per the website), and spreads flawlessly. Its official name is the PB-Jife, and it has its own rather catchy jingle, or (ahem) jam, written and recorded by PB-Jife founder Landon Christensen. “It’ll change your life,” the lyrics promise.

Or at least change your mornings. As someone who eats peanut butter toast for breakfast five or six days a week, it has changed mine. Especially those mornings when I pull my toast hot out of the toaster (oven, always) only to realize I’ve got a brand-new jar that needs stirring, fast. And efficiently, sans the oily spillage that inevitably comes from a simple butter knife, or what I used to use: a backward-facing soup spoon. (Not a bad option, but it’s no PB-Jife.)

Of course, the PB-Jife is not some priceless family heirloom, some marrow scoop passed down through generations. It’s not a relic of another time. It evokes no nostalgia. Single-use silverware itself, on the other hand, does. Consider the Ortiz anchovy fork. That cute, dollhouse-sized prong that comes affixed to the jar of olive oil-packed filets, to keep your fingers from smelling like anchovies all night. A treat taped to a treat, since 1891.

Occasionally, I’ll keep the Ortiz fork for a stint. To use with the cheaper jars, the lesser jars, that come without a fork of their own. I go through a lot of them. For six years running, I’ve been a jar-carrying member of an Anchovy Supper Club. Every dish must feature the bottom feeder, or its friends. My friend Samantha gussied up our most recent socially distanced backyard meal with a rare form of vintage fish flatware: a sardine fork. The squat, multi-tined symbol of Victorian refinement was used by oh-so-sophisticated people to horizontally support the slick and slender tinned fish. As did we, unpolished people, using it to bestow potato chip after potato chip with one marinated anchovy after another.

A collectible utensil, a single sardine fork can fetch upward of $900 on auction sites. Samantha found hers, etched and elegant, on Etsy for $30. A luxury, yes, but a little one. It left us swooning. Amortized over all our Anchovy Club years to come, we concurred: The fork was a worthwhile investment.

Did we need this wide-mouthed little-fish fork? Of course not. Specialized silverware is never necessary. That’s what makes it special. A simple, affordable, and, yes, superfluous pleasure smaller than a bread box. (Also nice, but non-essential).

The point is: The blissful functions of these forks and spoons and knives far outweigh both their price and the kitchen space they take up. Life is hard; single-use silverware makes it infinitesimally easier. It also makes me realize that maybe my grandparents, with their precious felted boxes, knew best.

One winter, a few years ago, I was reintroduced to the grapefruit spoon, and more specifically to its simple genius and true joys. My friend Lisa showed up to a shared Airbnb bearing breakfast fixings — bagels and cream cheese and coffee beans, and not only organic grapefruits but, being the overachiever that she is, a Ziploc of grapefruit spoons. All the freaking gear involved in packing for a family ski weekend, and this saint of a woman packed grapefruit spoons, too? “You can’t eat grapefruit without a grapefruit spoon,” she said, matter-of-fact.

She was right. The ease! The effortlessness! The neatly scraped rind! All that sweet satisfaction without an ounce of exertion. (And only $5.99 for a set of four at Bed Bath & Beyond.) She accidentally left them behind. They’ve lived happily among my teaspoons ever since, but lately I’ve been thinking they deserve better.

The other day, over a family text thread, I learned that my mother-in-law ate a grapefruit every single night for decades, until her cardiologist told her to stop. She never used a grapefruit spoon, though, she said. What! Why not? I asked. “Why would I?” she responded. “I had a grapefruit knife.”

Rachel Levin is the coauthor of EAT SOMETHING (Chronicle Books, 2020), and STEAMED: A Catharsis Cookbook for Getting Dinner and Your Feelings on the Table, which comes out in May, from Running Press.