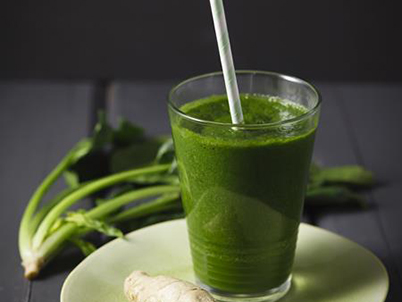 I Tried It … One of Those Damn Juice Cleanses

I wasn’t wholly unprepared for her message. A few months earlier we happened to meet the nice, if skeletal-looking co-owner of San Francisco’s Juice Shop at a happy hour. (We were drinking wine. He, of course, wasn’t.) After hearing all about how he and his two brothers started this company because green juicing had saved his life after a serious health scare, we were inspired. “We’re in! We’re doing it!” we’d declared, a little tipsy. And then, on our way to dinner, we promptly dropped the ridiculous idea.

But then, gluttony sort of sneaked up on us. My husband and I followed this year’s all-day turkey feast with a weekend of barbecued oysters dripping in bourbon-butter sauce, cinnamon sticky buns, the aforementioned cheeseburger — and a six-course supper of duck liver pate and pork belly; soup brimming with rabbit sausage; filet mignon paired with a braised beef stew; cheese and chocolate cake for dessert. In this extremely overstuffed moment, the idea of a juice cleanse seemed like a smart one.

And so, $189 dollars, plus deposit and home delivery (!) fees later, I was indeed in. They call it a “cleanse,” but I knew better. Whatever the promise of detoxification and recalibration and regeneration, this was a full on three-day fast: 102 liquid ounces a day of algae elixirs and local, organic cold-pressed concoctions that come in cute glass bottles in flavors like kale and celery, beet and carrots, pear and chia seed and, the real indulgence, raw almond and Himalayan salt.  “Yes!!!” I texted back. “I’m IN. 100%”

There are five or six juicing companies in San Francisco alone, and more juice bars and juice boxes and juice presses around the country by the day. Juice seems to be the new Coke for crying out loud, and I guess we should all be happy about that. Still, Americans — of the LuluLemon-clad, Range Rover-driving sort — have no qualms about spending nine, ten bucks a bottle to unleash their inner Gwyneth Paltrows. It’s a trend I’ve mocked while watching women, and men, (but mostly women) parade around town with their BPA-free bottles of green sludge.

I’m an eater. One of the best. Which is why everyone mocked me when I said I was on a juice cleanse for the next three days.

So, yeah, this was my first-ever fast, without having the stomach flu. Even on Yom Kippur, the one day of the year that Jewish guilt could potentially convince me to forgo breakfast, I start the day off with a three-egg omelet. I’m an eater. One of the best.

And, for better or worse, of the body type that’s more or less able to withstand an above average level of gluttony. Which is why everyone mocked me when I said I was on a juice cleanse for the next three days. “You??” “Whhhhyyy? “Good luck with that…”

How did it go, you wonder? Because, admit it, you have been wondering whether you should maaaaybe try a juice cleanse, too. I’ll tell you: It sucked. Pretty much every second of it was awful.

I choked down the algae, telling my daughter it was medicine so I didn’t give her an eating disorder at age 5. I had a persistent headache from the get-go from giving up coffee. My stomach growled incessantly. I drank herbal tea while my officemates celebrated a book deal with martinis and apple pie.

I would savor every single seed swimming in my favorite juice, the Pear-Pineapple-Chia, and try desperately to reach the ones on the very bottom of the bottle with my tongue to no avail. I peed, oh, about every half-hour. I almost-puked a few times, and eventually, started fasting on the fast because (sorry Juice Shop!) I just could not get the Deep Greens down.

I googled “juice cleanses bull shit” and came across this Jezebel clip entitled (yup) “Juice Cleanses Are Kind Of Bullshit.” And a hilarious feature in San Francisco magazine, “Are We Glowing Yet?,” that made me think, for a split second, when I looked n the mirror on Day 3, that, hmm, maybe I was glowing. Or was that jaundice? Slate’s piece— the one Samantha posted on her Facebook page, along with this apt comment: “Juice cleanses are just privileged people starving themselves voluntarily” — put it best, though: “Stop Juicing: It’s not healthy, it’s not virtuous, and it makes you seem like a jerk.”

And a jerk is certainly what I felt like at the movie theater as my friends passed the popcorn directly over me, while I demurred, no, no, thanks, I’m good with my raw almond-coconut water and, um-excuse-me-everyone bathroom breaks.

But, ok, ok, the upside? I had more time when I was on a juice cleanse. Without my morning run or latte wait or wondering What Do I Want for Breakfast/Lunch/Dinner? (Because when you live in San Francisco especially, every glorious, delicious meal counts.) Life opened up a little. Also, I slept well. I lost a pound. I felt… calm.

Ultimately, though, for me, the real virtue of The Cleanse was, simply, that I did it. (Despite the two texts to Samantha in which I tried to bail.) I said I was IN, 100% percent. And I was. Except for one prematurely celebratory glass of red wine on the last night, which left me a little loopy.

Bottom line for anyone contemplating a juice cleanse? Guess I’d tell you the same thing that I tell my kids: Chew your food.