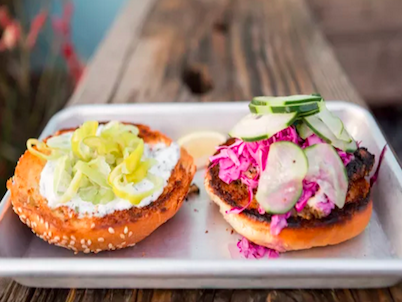 It was August in the Outer Sunset and so of course there were puffy coats and wool beanies and beards. And flip-flops.

As dudes in wetsuits strutted by still dripping, I wondered, what about bare, sandy feet? “It happens,” says Christian Morabito, co-owner of San Francisco’s newest seafood spot. “People try and bring in their dogs, though, and I’m like, no. This is a food facility!”

Friday night at Hook Fish isn’t like Friday night anywhere else in the city. Many of those who cut through Karl the Fog to get here do so on foot. Two blocks from the water, on a mostly residential stretch of Irving Street, there are no double-parked Ubers or eager Elite Yelpers or underdressed tourists, just a bunch of close-knit locals sitting on reclaimed pier pilings, putting back cold Pacificos, and slurping plump West Marin Miyagis, stoked to see each other — and stoked to have a new homegrown restaurant in the ’hood.

It’s a restaurant that feels more like the main cabin of a beautiful wooden sailboat — with hand-built, honey-hued everything: the counter, the benches, the one big table, the ceiling, the wall lamps, even the cash drawer is a log that’s been salvaged and sawed. All elements are the handiwork of resident woodworker Jay Nelson, the sustainability-minded talent behind Outerlands, a restaurant that pioneered the transformation of the nearby 4000 block of Judah.

You could call Hook Fish a “seafood shack,” and I’m sure by next summer, all the food and travel magazines rounding up their lists of “best seafood shacks” will. With just 15 seats inside, it’s the size of one. But that makes it sound rickety and salty and slippery, or like one of those sprawling waterfront traps trying to seem authentic.

Hook Fish is neither. It just is authentic. I don’t mean the food, per se — I mean the people and purpose behind it.

Co-owner Morabito is a 28-year-old lifelong surfer who quit his job delivering boxes of produce for the Fruit Guys to bike 1,600 miles down to Cabo with his brother. They rigged up a bike trailer big enough to lug their boards, camping gear, a bunch of water, and their fishing rods and Hawaiian slings. For three glorious nomadic months, they sustained themselves on spear-caught rockfish, halibut hooked on a fly, clams dug at low tide.

Back home in San Francisco, nostalgic for Baja, he started buying a whole albacore every now and then off the dock in Half Moon Bay. He and a few friends — friends who knew more about cooking than he did — would turn it into poke or ceviche, buy a bunch of beer and chips, and invite everyone over. Soon, that morphed into catering gigs for companies like Patagonia that cared, like him, where their fish comes from.

For a second, Morabito admits, he thought about starting a dog food business that used quality, local ingredients.

I’m so glad he didn’t. Instead, in June, having scored a decent rent from the former owners of Cajun Pacific, he opened a seafood business that uses quality, local ingredients. San Francisco’s 120,000 dogs may balk, but I think Hook Fish is a better boon for the city.

The goal was ambitious, and admirable: to open an “accessible place” to eat (and buy) seafood caught off the California coast, a place that connects “our fisherpeople” to all people while cutting out the many hands that typically touch a slab of salmon before it gets to the consumer.

The city’s most respected chefs, of course, do this already on their nightly changing, more elaborate menus. But Morabito just wanted to serve restorative food and really good fish at prices fair to those both catching it and eating it. And, magically, somehow — even in San Francisco — he did.

That’s a lot of backstory, I realize, but it’s important to understand what Hook Fish is and why it’s worth a long-ass Muni ride.

Morabito and his business partner, Beau Caillouette, hired fellow surfer Luke Johnson, a former in-house chef for Couchsurfing, to do the cooking. Together, they honed the brief menu that hits all the familiar beachside staples — made with your pick of the four of five catches of the day. They are all listed along with the vessel they were caught on and the method used to hook them (i.e.,Halibut, Port: Half Moon Bay, Method: rod and reel, Vessel: Krabmandu, Price: 33.95/lb).

Honestly? It’s all good. Could I really tell the difference between the lingcod and the halibut and the rockfish tacos, when each came cloaked in the same combo: pico de gallo, fresh avocado, a splatter-paint of spicy aioli, and a lively cumin- and coriander-spiked curtido, aka pickled cabbage slaw? Nope. They add a little too much pickled cabbage slaw, but on heavy, handmade corn tortillas, I loved them all anyway. I didn’t want to even bother trying the fried avocado tacos, but I was pleasantly surprised. They were meaty and creamy, and I barely missed the flesh of fish.

Other standouts: the blackened fish sandwich, which I had with halibut. It was firm and flavorful and smeared with tangy house-made tartar sauce, more of that slaw, and pepperoncinis on a not-too-bready roll. With a few dabs of the house-made carrot-habanero, it was even better. The only letdown about the burrito was the same letdown about any burrito: too much rice. When you’re paying 16 bucks for one stuffed with lingcod, you kind of want to be able to taste the fish.

If I lived two doors down, like pretty much everyone behind the counter, I’d come in daily at lunchtime for the house-smoked trout salad, served on a tin tray of seasonal greens doused in creamy creme fraiche, slivers of red onion, sunflower seeds, and these hidden “everything” nut clusters that added such a delightful crunch, I started seeking them out to ensure I got one with every bite.

Drawbacks to Hook Fish? The Fisherman’s stew tasted more like a mild minestrone. (Even on a cold night, I’d skip it.) And despite requesting they pace your over-order, it’ll arrive all at once — and always, impressively, within minutes.

The thing is, though, Hook Fish is the kind of place where you want to, you know, chill. If it took 25 minutes for my tacos, and I had to order another beer, I wouldn’t mind. My only fear is that as the weather warms this fall, and the word spreads, I may get my wish.

But for now, sitting outside on a bench made of cribbing timber, bundled up beneath a hammock of electrical wires sharing fish and chips with friends, Hook Fish still feels like a secret. Maybe the masses will stay away. After all, this is not a place to eat overpriced seafood overlooking the ocean with a sunset view. It’s better than that.

It’s a place to eat reasonably priced seafood with the Outer Sunset crew, ironically the warmest community in this ever-frenetic city. A true outside land, where people prefer to spend time together, surfing waves, not the web.