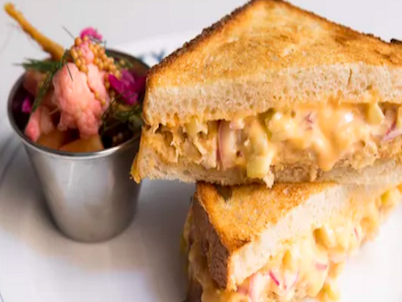 I will do breakfast, dinner, after-work drinks with anyone, anytime. But that whole “Wanna grab some lunch?” thing? Eh, no thanks. Like most office types these days, I prefer to grab and go. And eat solo — #SadDeskLunch style.

No offense. It’s not you. It’s just… lunch, the least fun meal of the workday. It’s hard to have a good time with meetings and deadlines looming. Moreover, the standard downtown fare is rarely worth the time it takes to eat it anyway. A three-hour, three-martini outing would be a blast, but who really does that on a regular basis anymore?

I’m not alone in my anti-lunch sentiments: Americans ate 433 million fewer midday meals out last year; 2016 was the lowest lunch traffic in four decades according to market research firm NPD.

Delivery is up, and company cafeterias are taking over. Still, the “meet-me-at-Mixt-at-noon” monotony was clearly in need of a makeover.

City Counter’s tagline, “Quality Luncheonette” — scrawled on every plate in an evocative cursive — rings true. The cozy, old-school feelings it purports to conjure up, though, not so much.

Matheson wrote on her Kickstarter page: “I don’t want to just serve you a delicious, satisfying sandwich. I want to make you feel the way I did when my mom took me to lunch after we got my prom dress in Union Square.”

Hmm. Admirable, except the vibe feels more like “I just got an iPhone.” All white, from the tile to the 30 stools lining the 40-foot-long counter to the two-tops set against a wall of windows, City Counter looks more 2017 Apple Genius Bar than 1940s Woolworth’s lunch counter — mixed with 1980s bat mitzvah DJ. “We Are Family” and “Got to Be Real” blare overhead at a decibel level that’s a little too much for lunch. Then again, maybe Matheson is just trying to up the “fun”?

She’s done a bit of a better job upping the food, giving the sandwich the love and attention that, oddly enough, very few downtown lunch spots — other than Dennis Leary’s take-out window, the Sentinel — do.

Consulting chef Sean Thomas, of Blue Plate, came up with nine sandwiches that defy the typical grilled turkey-and-cheese scenario. All are made-to-order yet magically served within minutes (key for any successful lunch spot).

And some are noticeably better than others. Like the Mezzogiorno: a fatty, fabulous hot mess of pistachio-studded mortadella, roasted pork loin and belly, smoked mozzarella, and hot cherry peppers on toasted Acme white bread. The tuna melt, closed-faced on toasted sourdough, with red onion, pickled celery, and a gooey, delicious three-cheese fondue, reminds me that tuna melts, when done right, deserve some respect.

The roast beef is stuffed with slow-cooked tri-tip, on the rare side and sliced thin, with spicy pickled carrots and red peppers on a roll smeared with garlic aioli and a house-made pimento cheese spread that I was happy to see again, as a $1 addition to the deviled egg salad sandwich.

You’ve got to be a real deviled egg lover to love that one. As just a deviled egg liker, I was overwhelmed by what seemed like a carton’s worth crammed between two slices of soft, unapologetic white bread. I was lured by the promise of “crushed salt & vinegar chips” inside the sandwich. A brilliant idea, but unfortunately, there was barely any crunch.

I’m also a beet hater. Blasphemy, I know. But from across the table (the only table in the long narrow space, by the way, that fits a trio and comes with chairs), I could appreciate the beauty of the Reubenesque: smoked red and golden beets pressed between thick slabs of perfectly toasted rye, with pickled cabbage and sharp cheddar that oozed like strawberry swirl. I tried one bite and it tasted like… beets, as beets do; my friend devoured the rest. He declared the beets to be a little too flimsy. I declared I wish City Counter had a real Reuben. Or at least a patty melt.

It would no doubt be better than the Counter Club, which was too bready and bulky to determine if there was indeed anything counter about it.

The salads, however, were crisp and creative. Despite the fact that they were so overdressed they’d make a Chez Panisse chef shiver, they beat any I’ve ever brought back to my office. The fresh peas and dried raspberries in the chopped spring pea were drowning in an otherwise tangy masala yogurt dressing. Purple and orange carrots, just pulled from the ground, were almost unidentifiable due to an abundance of a kaffir lime tahini in the roasted carrot. And the crispy chickpea and tuna: chunks of fresh tuna, cherry tomatoes, and (addictive) garlic peanuts came in a pool of Thousand Island dressing so deep, even my grandfather — who ate it by the bowl — would’ve disapproved.

But everyone’s grandmother — as well as non-gluttons of all ages — will applaud the aptly named Grammy Sammy: a single piece of white bread, spread with “counter sauce” (a mild garlic-Worcestershire aioli) and folded over a slice of mortadella and smoked cheddar. The menu states the Grammy Sammy “changes daily,” but it’s been the same since they opened, the smiley woman behind the iPad said.

No matter. It’s simple and sustaining and half the price of a latte at Blue Bottle next door. A decent $3 sandwich is a welcome addition to downtown San Francisco.

As is City Counter itself. It’s neither a power lunch nor a pathetic lunch, but a proper lunch. One worth occasionally ditching your desk to sit and eat, elbow-to-elbow, at a counter crowded with compatriots — perhaps even sip a root beer float — like people used to.